Berkshire Hathaway disclosed some changes to its portfolio after trading Friday, while one analyst keeps pushing for General Motors to make its electric vehicle business a stand-alone company.

On the downside, airline stocks and cruise stocks were some of the biggest losers. Shares of American Airlines Group, United Airlines, and Carnival fell 5%, leading their subsectors lower.

And while Buffett's buy of Barrick Gold sent Newmont higher, Berkshire's decision to off-load all of its common shares of Occidental Petroleum (OXY -0.82%) and cut its stake in Wells Fargo (WFC 0.68%) by 25% last quarter had other investors selling their shares today as well. 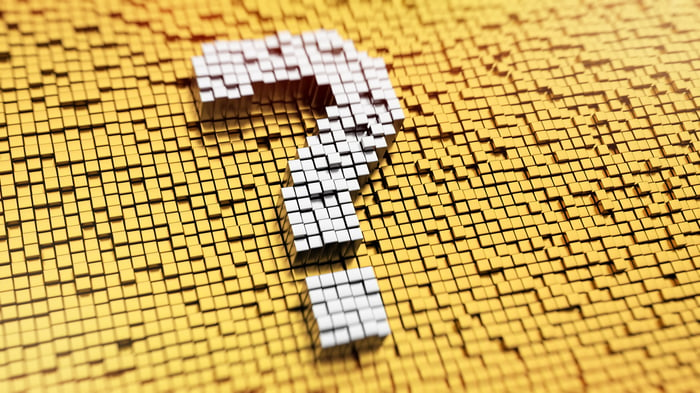 Analyst: GM's EV business would be worth billions as a stand-alone company

General Motors has invested significant resources into its electric vehicle business, and those investments have the company set with a burgeoning collection of technology and appealing vehicles that it will bring to market in coming years. The question many investors have is how much value the EV business will create for shareholders; there's certainly reason to question whether it has so far.

In recent weeks, Deutsche Bank analyst Emmanuel Rosner has made it clear that he thinks General Motors should spin its electric vehicle business off into a stand-alone company. Rosner estimates its EV business could be worth as much as $95 billion, based on the sharp run-up and extreme valuations of stand-alone EV/hydrogen start-ups like Nikola, which is still at least one year from having a commercially available vehicle, and Tesla, which has become the most valuable car company on earth.

Rosner's biggest point is that a spinoff would allow the business to tap capital more cheaply via stock offerings, while GM shareholders, who would presumably get a stake in the spun-off business, would profit from the market's revaluing of the EV business on its own. GM's executives don't seem so excited to make this move. Not only would it have negative implications for GM today, but it would also strip out the company's entire future if EVs were no longer part of its core business.

Buffett buys a gold stock: Berkshire's stunning move, and some sales that weren't so surprising

Warren Buffett has never been shy about his opinion of gold as an investment. In short, he isn't a fan, and has pointed out that gold isn't a "productive asset," which has made it an underperforming investment as compared to companies that can grow their earnings over time. A large portion of its value is propped up (or wiped out) by speculators, and its utility value for industrial or consumer products is limited.

Because of this history of being negative on the metal itself, many people were stunned to learn that Barrick Gold had joined the Berkshire portfolio last quarter, with the conglomerate buying 21 million shares. What's Buffett thinking? I think it's important to note that he has derided gold as an investment for decades, but hasn't been nearly so negative against gold companies. To the contrary, Barrick Gold has a number of characteristics that Buffett likes, including a strong margin of safety in its balance sheet, and production costs that allow it to make money even if gold prices fall sharply.

On the other side of the ledger, Berkshire sold off the common shares of beleaguered oil giant Occidental Petroleum in the quarter, shares that it started accumulating in the second half of 2019. Needless to say, this investment hasn't gone well for Berkshire: 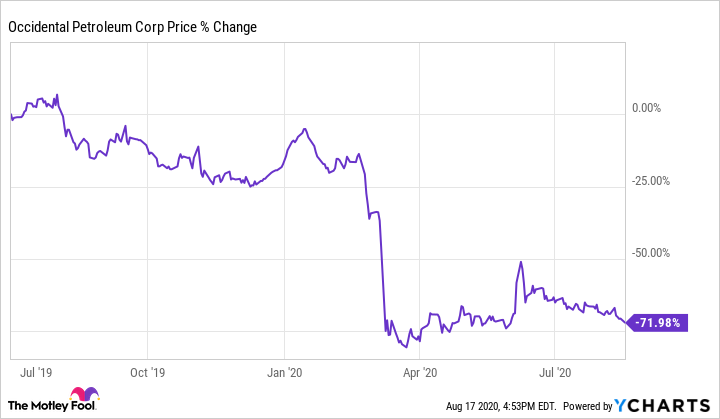 Berkshire still owns preferred shares of Oxy, which it bought to help the company fund its acquisition of Anadarko Petroleum. Ironically, if Oxy isn't able to survive without going through bankruptcy, the Anadarko acquisition will be the reason why. The deal was largely considered wildly overvalued, and added billions in high-interest expense right before the worst oil crash in history.

Berkshire also sold more than 60% of its stake in JPMorgan Chase (JPM 0.24%), all of its Goldman Sachs (GS -0.36%) shares, and more than 25% of its investment in Wells Fargo (WFC 0.68%), one of Berkshire's longest-held investments. The economic impact of the coronavirus pandemic has hit banks especially hard. Shares of the three are down between 19% and 55% from 2020 highs, as their earnings have cratered as loan losses mount: 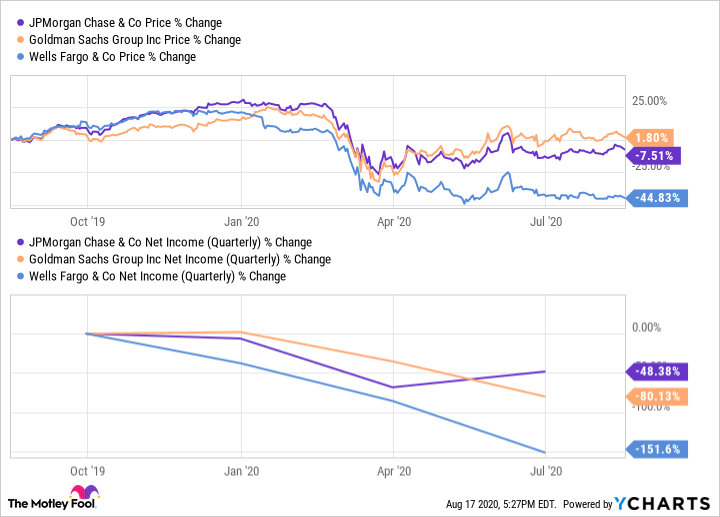 Graphics-chip giant NVIDIA has been a wonderful investment so far this year, and Wall Street analysts expect the good times to continue. With the company's earnings report coming up, multiple analysts upped their expectations and price targets today, sending shares higher. Monday's move means NVIDIA stock has more than doubled in 2020, and is up an incredible 210% over the past 12 months.

While weekend air-passenger traffic was once again relatively strong as compared to the lows in late March and April, travel remains far, far below pre-coronavirus levels. Moreover, there's risk that the recovery we have seen could start to lose wind. According to an Associated Press report, most Americans still don't feel it is safe to fly, and the reality on the ground is that most airlines don't have the capital to survive long term in the current environment.

Joining American and United in today's sell-off was Alaska Air Group, Southwest Airlines, and Delta Air Lines, down more than 3%, along with cruise line stock Norwegian Cruise Line Holdings. All fell on these worries about the ongoing struggles for the travel industry.

These Stocks Are the Bright Spot in an Ugly Market