A new record for the Nasdaq shows the divisions within the market.

Monday continued a trend we've seen for some time. Even as the Nasdaq Composite moved higher into record territory and the S&P 500 (^GSPC -2.82%) flirted with all-time highs of its own, the Dow Jones Industrial Average (^DJI -2.26%) lost ground. There's still a lot of uncertainty about the future direction of the market, and although certain sectors like technology can be winners regardless of the outcome of the coronavirus crisis and other pressing issues, blue chip stocks in many other industries aren't as fortunate.

Nowhere has the lack of knowledge about the long-term impacts of COVID-19 been more evident than in airline stocks. With the industry's entire business model at risk, it's not surprising to see shares of major airlines remain under pressure. That's might be how things stay unless a vaccine becomes available. 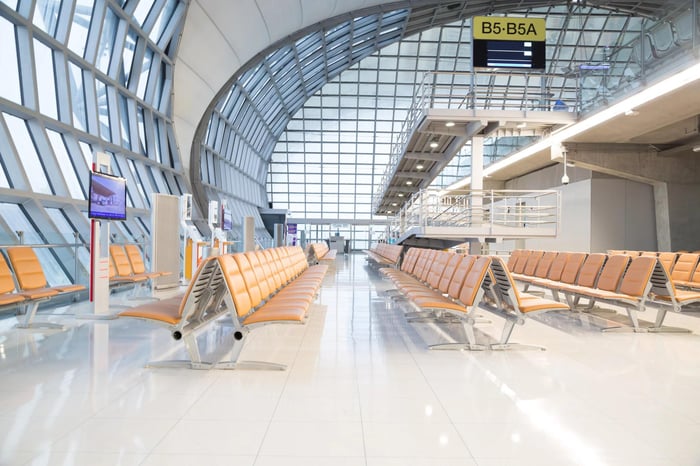 Surprisingly, one source of concern for airlines came not from the U.S. but rather from Europe. Even though the incidence of COVID-19 is much lower in European countries, several countries there took steps to limit travel between countries, imposing new quarantine requirements in an effort to prevent larger outbreaks of the disease.

Will travel ever be the same?

No matter how much a country has coronavirus under control, the threat of a resurgence is always lurking. Even in New Zealand, which went for a month without any new cases from within its borders, a new outbreak in the North Island city of Auckland has led to dramatic reversals of more lenient policies. Similarly, the tourist destination of Iceland has had to return to previous restrictions, including limits on large assemblies of people and mandatory mask wearing in areas where social distancing isn't possible.

Nevertheless, airlines are doing whatever they can to try to sustain their operations. United, for instance, launched new routes between the northern part of the U.S. and several Florida cities, beginning in November. The move comes even though it's unclear whether demand will surface -- especially if Florida continues to be a hot spot for new COVID-19 cases.

Investors can't be certain what the American public will do with their travel plans, regardless of which direction the pandemic goes in the months to come. Without any clarity on what the future will bring, airline shareholders are essentially making decisions with far less fundamental reasoning than they're used to having.