Here's why this popular coronavirus stock will further enrich investors.

Novavax (NVAX -1.96%) is a biotech at the center stage of the investment world right now as it works to create a vaccine against SARS-CoV-2. This is undoubtedly a colossal venture; a successful vaccine could save countless lives and allow economies around the world to safely reopen.

With so much interest, investors may feel uncomfortable purchasing shares of Novavax right now, fearing the company's growth outlook is already part of its share price. However, there are at least three reasons why Novavax's momentum is likely to continue. 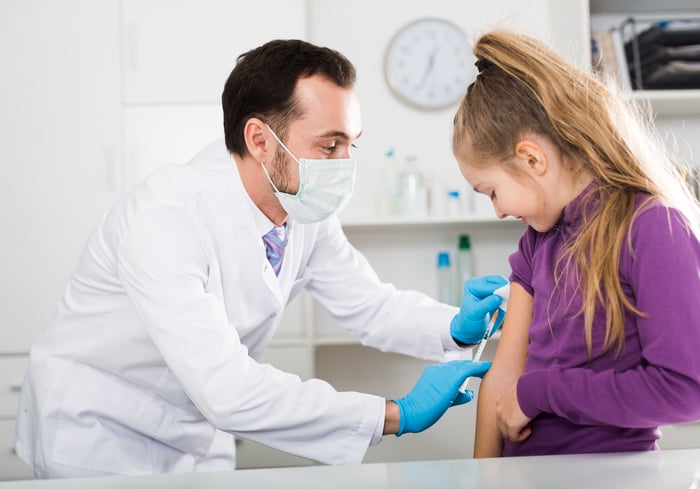 In its phase 1 data release, Novavax announced that 100% of healthy volunteers who received up to two doses of its recombinant (DNA-encoded) COVID-19 vaccine, NVX-CoV2373, developed neutralizing antibodies, which are small proteins that recognize certain components of a pathogen and prevent it from invading healthy cells. The data is awaiting peer review.

Additionally, participants demonstrated a robust T-cell response. T-cells recognize virus-infected cells and tell those cells to self-destruct, preventing the virus from spreading throughout the body. Unlike antibodies, which may disappear just weeks after dosage, T-cells can form memories of pathogens for months or years.

The science is encouraging, and Novavax is planning to proceed into phase 2 for its vaccine candidate by the end of August. So far, the company has secured $2 billion in funding for NVX-CoV2373 from the U.S. government, including as part of Operation Warp Speed. Also, the U.K. government placed an order for 60 million doses of the company's vaccine candidate on Aug. 14.

Novavax has the commercialization aspect of things secured as well. The company expects to manufacture 1.25 billion doses of its COVID-19 vaccine by next year, pending clinical trial success. Assuming each dose sells for $20, that means the company can generate $25 billion in gross proceeds to be split between itself and commercialization partners. Not bad indeed.

Currently, Novavax is in a great financial position due to its government funding. In Q2 2020, the company recorded development revenues amounting to $35.5 million, which helped to narrow its net loss from $39.6 million in Q2 2019 to $17.5 million. Furthermore, the company has about $609 million in cash and equivalents on its balance sheet.

At the current cash run rate, the company should not need to sell more stock to raise money until the end of phase 2 for NVX-CoV2373. That's good news because it allows investors to avoid stock dilution.

If a successful vaccine requires  multiple doses, the demand for coronavirus vaccines may far exceed the current world population of 7.8 billion. Also, we do not know how long a vaccine's protection will last, setting up the possibility for manufacturers to generate recurring cash flows via revaccination. Hence, investors should realize it is perfectly viable for many biotechs to compete in this giant market, all the while generating billions of dollars in revenue.

That said, Novavax's vaccine is definitely at the forefront of the race, as only 29 candidates out of 167 have made it to the human testing phase, and far fewer have clinical trial data. A market cap of $8.85 billion is quite small for a company that could be bringing in over $1 billion if its vaccine candidate succeeds in clinical trials and receives approval next year.

So far, the company's shares have surged 1,750% since January, turning a modest investment of $10,000 at the beginning of the year into $185,000 in just eight months. I think Novavax remains an excellent buy for investors interested in the biotech sector.