Please ensure Javascript is enabled for purposes of website accessibility
Log In Help Join The Motley Fool
Free Article Join Over 1 Million Premium Members And Get More In-Depth Stock Guidance and Research
By Keith Speights – Aug 19, 2020 at 6:09AM

But it's also behind both Inovio and Novavax in the race to develop a coronavirus vaccine.

There's a new stock of a small biotech with a promising coronavirus vaccine now available to U.S. investors. CureVac (CVAC -1.91%) held its initial public offering (IPO) on the Nasdaq stock exchange last week. And that IPO raised some eyebrows.

CureVac expected the IPO share price would be between $14 and $16. The actual IPO price landed at the upper end of that range, but didn't stay there for long. CureVac stock opened at $44 per share on Friday, nearly three times higher than its IPO price.

The biotech stock has given up some of its jaw-dropping first-day gains. However, CureVac still claims a market cap of more than $12 billion. Here's what you'll want to know about the company that's already bigger than rival coronavirus vaccine makers Inovio Pharmaceuticals (INO -2.19%) and Novavax (NVAX -3.61%). 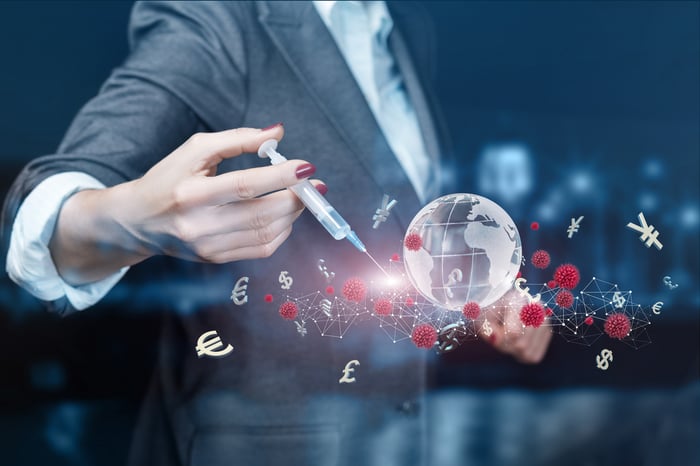 Moderna (MRNA -0.04%) has received a lot of attention from investors because of its promising messenger RNA (mRNA) technology, but German biotech CureVac was already a pioneer in mRNA research a decade before Moderna was founded.

Scientists have known about mRNA for nearly six decades. However, partly because mRNA is unstable, they didn't immediately realize the molecule's therapeutic potential. German doctoral student Ingmar Hoerr discovered that mRNA could be administered directly into tissue and used as a vaccine or therapy.

Hoerr went on to receive his doctorate and founded CureVac in 2000 to run with this discovery. CureVac became the first company in the world to successfully use mRNA for therapeutic purposes.

In January of this year, the Coalition for Epidemic Preparedness Innovations (CEPI) announced a collaboration with CureVac to develop a novel coronavirus vaccine. CEPI, a public-private partnership focused on fighting infectious diseases, said it would fund up to $8.3 million for CureVac to accelerate the development, testing, and manufacturing of a coronavirus vaccine candidate.

CureVac made quick progress. In June, the biotech received a green light to begin phase 1 clinical studies of its mRNA coronavirus vaccine in Germany and Belgium. CureVac selected its vaccine candidate from several that the company evaluated in preclinical testing because of the high neutralizing antibody levels and T-cell responses generated in animal models. Both neutralizing antibodies and T-cells are immune responses that could prove useful in staving off infection by the novel coronavirus that causes COVID-19.

In January, CureVac announced positive interim results from its early stage study of mRNA-based rabies vaccine candidate CV7202. All of the study participants who received two doses of the vaccine had neutralizing antibody levels above the threshold recommended by the World Health Organization.

CureVac also has a couple of mRNA-based cancer immunotherapies in early stage development. It partnered with Ludwig Cancer Research and Boehringer Ingelheim on BI 1361849 in treating non-small cell lung cancer. The company's CV8102 is being evaluated in a phase 1 study as a potential treatment for advanced melanoma, adenoid cystic carcinoma (a rare type of cancer that starts in glands), and cancers of the head and neck.

Why is CureVac valued more highly than Inovio and Novavax despite being behind in the COVID-19 vaccine race? Part of the appeal could be that investors like the potential of CureVac's mRNA technology. It doesn't hurt matters that the German government has invested 300 million euros (around $356 million) in CureVac, a potential sign that the company could gain access to the big German market if its vaccine candidate is successful.

My view is that CureVac is worth watching but isn't a stock to buy right now. It's not just that the company's COVID-19 vaccine candidate lags behind those of Inovio and Novavax. There are also two other mRNA COVID-19 vaccine candidates ahead of CureVac's candidate -- one developed by Moderna and another developed by BioNTech and Pfizer. This hot German biotech might be bigger than some of its rivals, but it's not necessarily better than they are.