Tepid revenue growth is hiding marked improvement across the board.

At first blush, Axon Enterprise (AXON -0.37%) is just a simple manufacturer. Previously known as TASER International, the company makes stun guns and body cameras for police forces around the world. Dominance in the market is a strength. But if it just produced physical goods, Axon would eventually become a commodity player.

But scratch the surface and you'll see Axon is actually a tech stock. Specifically, its move into software as a service (SaaS) has drastically changed business fundamentals.

It appears, however, that the market wasn't too impressed with second-quarter results. Shares now trade almost 25% below mid-June highs. That would leave me licking my chops to buy more of the stock...if I didn't already own so much. Here's why. 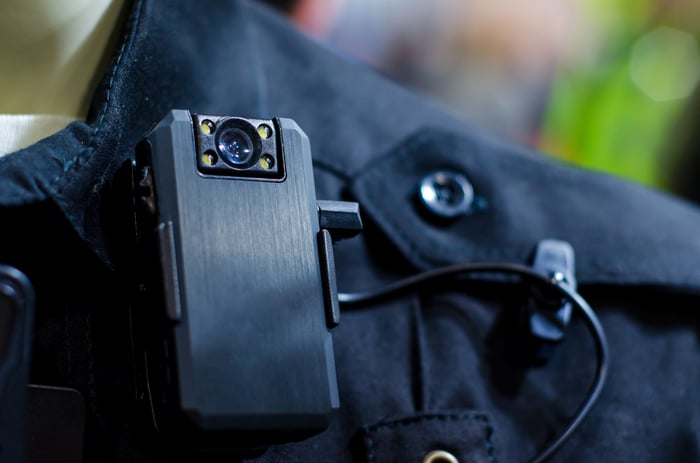 On the surface, Axon's results were ho-hum. Revenue was up 26% while net income dropped substantially, to a loss of $0.51 per share. Additionally, management guided for just 15% revenue growth in the current quarter, leading some to believe that the company may be suffering from lower budgets at police departments.

But this view doesn't contextualize all of the moving parts at Axon. There are three key reportable segments:

If we look at gross profit instead of just sales, we see that Axon is gaining leverage. Because of its market dominance and the effects of scale, police departments are willing to pay top dollar for Axon's services while the cost of actually providing them is (comparatively) going down.

As you can see, that 35% growth doesn't find its way into the headlines, but is vital nonetheless. Furthermore, there are two key explanations for the big loss in the quarter:

When you put these pieces together, you see that things weren't nearly as bad as they might have seemed.

Two areas that have me excited

But there was more -- much more -- that got me excited about the quarter: the progress of new products and international growth.

On the first front, Axon announced the Baltimore Police Department was adopting Axon's Records Management System (RMS). This SaaS offering promises to use artificial intelligence to take the footage and audio captured from body cameras, and use it to auto-fill incident paperwork.

This is an enticing offer for one big reason: Most police officers spend the bulk of their time at their desk, filling out such paperwork. Every minute that's happening, they aren't out in the community, improving relations with the people they protect. As the summer of 2020 and too many others have shown, the health of those relations is paramount.

Fresno, California, had been the company's original test-run with RMS in 2019. The fact that a department as large as Baltimore's has since signed on is a major vote of confidence in the solution.

But that wasn't all: Axon has been developing and deploying new tools under the Axon Aware umbrella as well. This allows dispatchers and headquarters to monitor where officers are and how events are unfolding in real time. It does this by using data streamed in from connected devices. This product, like RMS, is still in the early innings, but I think it's very promising.

Second, Axon announced strong results internationally in the second quarter. Sales grew 80% from the same time last year, with Indonesia, Thailand, and Panama all contributing over $1 million in revenue for the quarter. Chile also announced it would be equipping 600 officers with body cameras, the largest such effort in South America.

The effects of Black Lives Matter

But nothing brought Axon more into the limelight than the Black Lives Matter demonstrations starting after the death of George Floyd in Minneapolis. Axon wasted no time, addressing the issue from the outset of its earnings release.

And while some think the move to "defund the police" could spell doom for Axon, I take an entirely different approach. It's important to remember two things: First, Axon's mission is, and always has been, to protect life. That's a mission all sides of the current debate can get on board with. Second, Axon itself was born out of such circumstances. The necessity for Tasers dawned on Rick Smith as he watched the aftermath of the Rodney King riots in Los Angeles.

The fact that (high-margin) annual recurring revenue in the latest report increased 42%, and net revenue retention clocked in at 119% simply means that the company's service are more deeply embedded in police forces than ever before. No matter the direction policing takes, Axon will likely be part of the solution.

Why you should do what I won't

I shy away from adding more to any stock that's grown to 5% of my real-life holdings. That's why I won't be adding any more at this point. But if you're looking for a stealthy SaaS stock to add to your own portfolio, Axon is worth a look.