Americans turned to these essential retailers to get their needs met during the pandemic, and all three benefited from their strong e-commerce operations as Americans turned to online shopping to avoid risking exposure to the virus in stores.

In the battle for the American consumer, Target is often an afterthought next to Amazon and Walmart. The red-lettered retailer is much smaller than those two rivals, which dominate the retail landscape, but that doesn't mean Target is playing second fiddle here.

Target just posted 24.3% comparable sales in its second quarter, and adjusted earnings per share nearly doubled, to $3.38. The big-box chain is clearly emerging as a pandemic-era winner, and one big reason why is that it's well ahead of both Amazon and Walmart in profitability.

Profitability is one of the best measurements of a business's strength, and Target's ability to convert its sales into significantly higher profits in the recent quarter is a sign of the retailer's execution. Here's how the company is doing it. 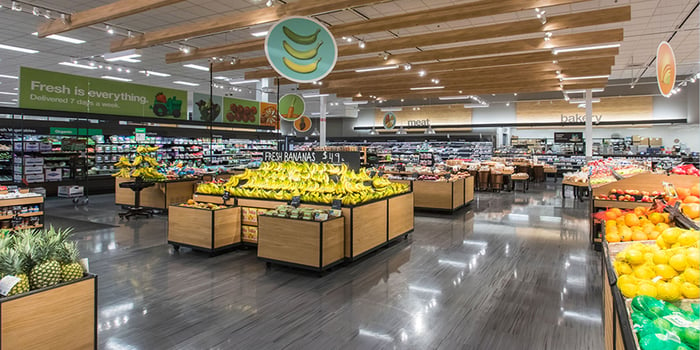 Americans turn to all three of these retailers when they need anything from eggs to a bicycle to a new set of pans, but the breakdown in sales differs between each retailer. Walmart derives more than half of its sales from groceries, making it the country's largest grocer, but that category tends to be lower-margin than other segments. As a predominantly online retailer, Amazon sells far more individual stock keeping units (SKUs) than its competitors, but the company's strongest category is electronics. It often uses its website to promote its own products like Echo speakers, Kindle e-readers, or Fire TV sticks, which it tends to sell at or near cost in order to drive media consumption. As an e-commerce company, Amazon also has to spend heavily on things like shipping and returns.

Target, on the other hand, operates in five business segments -- food and beverage, beauty and household essentials, hardlines such as electronics and toys, apparel and accessories, and home furnishings and decor -- with sales roughly evenly divided among the five. Target's "style" categories like apparel and home tend to generate higher margins than groceries, but the combination of those businesses gives Target a unique strength. Groceries drive frequent visits, and spur purchases for higher-margin discretionary items in areas like apparel. This strategy paid off in the second quarter, as Target's apparel comparable sales rose by double digits even as sales at clothing stores fell by 36% in that period, according to the Census Bureau.

Target and Walmart have distanced themselves from other brick-and-mortar retailers by establishing strong e-commerce businesses, and its stores play a significant role in its online fulfillment.

Walmart, however, has led with grocery in its e-commerce business, opening more than 3,000 online grocery pickup locations, but it's even harder to generate a profit in that category with the extra labor required for online pickup. Walmart's U.S. e-commerce CEO Marc Lore has essentially called online groceries a loss leader for the company. Walmart has also struggled in other areas. Acquisitions of digitally native brands like Bonobos haven't panned out as hoped, and it shut down both Jet.com and Jetblack, the experimental concierge service.

Target, on the other hand, has built its e-commerce business around a wider range of products and only recently made fresh and frozen grocery items available for pickup. It also uses stores to fulfill a large percentage of its orders, something Amazon can't do. In the second quarter, Target's same-day fulfillment services, which include curbside pickup, jumped 273%, driving overall e-commerce sales up 195%, and more than 90% of its total sales were fulfilled by stores.

One of Target's biggest strengths is its private brands. In addition to name-brand products at its stores, the company sells a wide array of owned and exclusive brands that give shoppers a unique product selection and provide a distinct advantage to the company. Target's new private food brand, Good & Gather, reached more than $1 billion in sales less than a year after its launch, giving the company a number of billion-dollar brands. Management also touted strong results with its All in Motion activewear brand, which it launched shortly before the pandemic in January.

CEO Brian Cornell explained the advantage of private brands on the earnings call, saying: "Together, these brands whose sales have outgrown national brands so far this year, offer guests quality and style at an unmatched value while enhancing Target's differentiation and delivering attractive gross margin rates." Since Target can control the cost inputs and pricing in private brands, they tend to be more profitable.

While Walmart and Amazon both offer private brands, Target collects a greater percentage of its sales from its exclusive lines, which helps give it higher profit margins than its peers.

Target's second-quarter results may prove to be an anomaly, and management warned not to extrapolate those results into the third quarter, but the near-10% operating margin shows the results Target can deliver when its e-commerce business scales up and it avoids things like markdowns. Even in their own blockbuster quarters, Amazon and Walmart couldn't come close to matching that level of profitability.