Please ensure Javascript is enabled for purposes of website accessibility
Log In Help Join The Motley Fool
Free Article Join Over 1 Million Premium Members And Get More In-Depth Stock Guidance and Research
By Leo Sun - Aug 24, 2020 at 9:33AM

A new generation of BlackBerry phones will hit the market next year -- but they won’t mean much for the struggling tech company’s investors.

BlackBerry (BB 0.59%) was once the largest smartphone maker in the world. But over the past decade, iPhones and Android devices redefined smartphones and left BlackBerry with less than 1% of the market.

Four years ago, BlackBerry stopped making its own phones and licensed its brand to Chinese smartphone maker TCL to produce new Android devices. TCL's devices included the Key2 and KeyOne, which included BlackBerry's physical keyboards, and the all-touchscreen BlackBerry Motion. 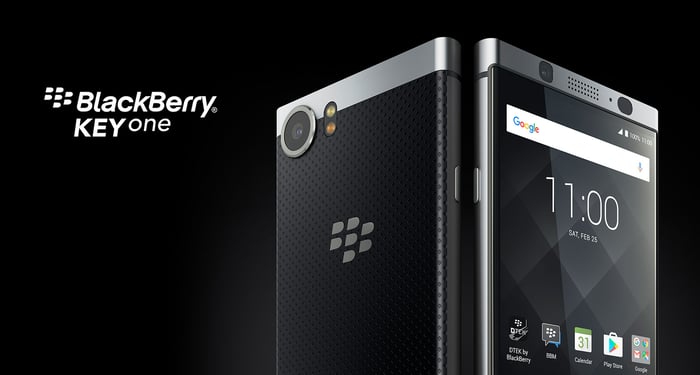 But earlier this year, TCL ended the partnership and announced it would discontinue all its BlackBerry phones in late August. BlackBerry's phones seemed destined to vanish again, but the company recently licensed the brand to a Texas-based start-up called OnwardMobility.

OnwardMobility, which was only founded last year, will license BlackBerry's brand and launch new 5G phones with Foxconn's (FXCNF -3.10%) FIH Mobile across North America and Europe in the first half of 2021. Unfortunately, these new phones probably won't lift BlackBerry's stock -- which lost 30% of its value over the past 12 months amid concerns about its slowing growth.

The painful evolution of BlackBerry

Under CEO John Chen, who took the helm in 2013, BlackBerry phased out its dying hardware business and expanded its higher-growth software and services business. That painful process produced years of revenue declines, but BlackBerry finally started generating positive revenue growth again last year. The new, leaner BlackBerry generated two-thirds of its revenue from software and services last year, and the remaining third came from its "licensing and other" business.

The "licensing and other" segment generates royalties from BlackBerry's portfolio of over 38,000 patents, as well as its brand licensing revenue from companies like TCL. The unit previously licensed the consumer version of BBM (BlackBerry Messenger) to Indonesia-based Emtek, but Emtek abandoned the struggling messaging app last year.

Instead of shouldering all the overhead costs and risks of producing new phones, BlackBerry licensed its brand to lesser-known hardware makers. Nokia (NOK 0.00%) also adopted a similar strategy by licensing its smartphone brand to HMD Global and FIH Mobile.

In other words, BlackBerry and Nokia are trying to milk the nostalgia value of their aging brands without assuming the risks of producing new devices. Collecting a stable stream of high-margin licensing revenue is likely preferable to selling the low-margin devices by themselves.

BlackBerry doesn't disclose how much of its licensing revenue came from TCL. However, none of TCL's devices captured a meaningful slice of the crowded smartphone market. IDC estimates BlackBerry only sold 850,000 KeyOne phones in 2017. Apple (AAPL 2.14%) sold 217 million iPhones, and Samsung sold 318 million Android phones that same year.

It's unlikely TCL's BlackBerry phones fared any better since then since global smartphone shipments declined in both 2018 and 2019. That's probably why TCL abruptly abandoned its partnership with BlackBerry.

So why does BlackBerry want to keep its phones alive?

BlackBerry already expects its licensing revenue to decline about 28% this year due to COVID-19 disruptions and postponed licensing agreements. BlackBerry's patent infringement lawsuits against Facebook and Snap also lost momentum last year when a court invalidated some of the disputed patents.

BlackBerry's software and services business is also struggling, as COVID-19 disruptions of the auto market reduced its revenue from QNX, which accounted for about a fifth of its top line last year. All those headwinds -- which ended its five-quarter streak of revenue growth last quarter -- indicate BlackBerry needs all the extra revenue it can get.

Therefore, it wasn't surprising to see BlackBerry quickly strike a new deal with OnwardMobility after its partnership with TCL ended. But TCL employs over 35,000 people, while OnwardMobility has fewer than 50 employees -- which suggests Foxconn's FIH Mobile will do most of the heavy lifting.

Why investors shouldn't pay too much attention to this deal

BlackBerry's planned entry into the 5G smartphone market is generating some media buzz, but OnwardMobility and FIH Mobile probably won't fare any better than TCL. Many smartphone makers have already launched 5G devices, and Apple will likely launch its new 5G iPhones later this year. By the time OnwardMobility launches its first 5G BlackBerries in the first half of 2021, the market will be saturated with higher-profile 5G phones.

In short, investors shouldn't pay much attention to this headline-grabbing deal. BlackBerry's new partnership with OnwardMobility will likely flop before generating much licensing revenue, and BlackBerry will be forced to find another production partner for its fading brand.