Please ensure Javascript is enabled for purposes of website accessibility
Log In Help Join The Motley Fool
Free Article Join Over 1 Million Premium Members And Get More In-Depth Stock Guidance and Research
By Rich Duprey – Aug 25, 2020 at 11:10AM

The move makes for good marketing, but likely does nothing to thwart the spread of COVID-19.

KFC has decided encouraging consumers to lick their fingers in the age of the coronavirus might not be the best marketing angle.

The Yum! Brands (YUM -1.60%) fried chicken chain announced Monday it will pause its famous "Finger Lickin' Good" advertising around the world. In the U.K. and Ireland, the company will run ads with the "finger lickin'" part of the tag line blurred out. 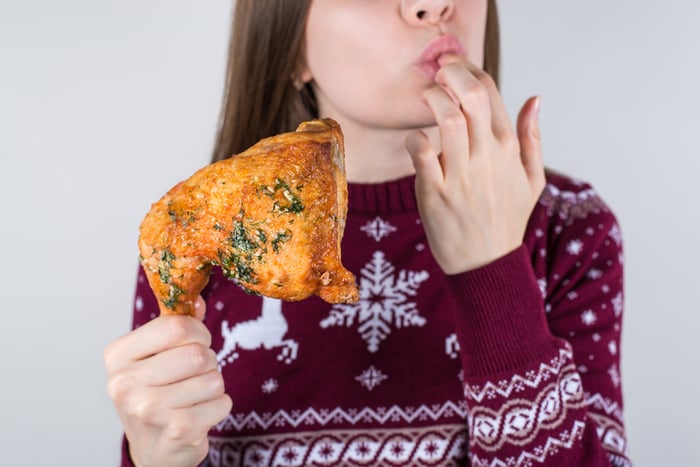 KFC first used the iconic slogan 64 years ago, reportedly the result of a brainstorm of one of the chain's franchisees, but decided the phrase "doesn't feel quite right" during the pandemic. COVID-19 is believed to be able to be transmitted by touching various surfaces.

However, the U.S. Centers for Disease Control and Prevention says that while touching food packaging or utensils that have the virus on it -- and then touching your mouth, nose, or eyes -- could possibly allow transmission, there is no evidence COVID-19 can be transmitted by touching food or eating it.

Ultimately, this is more of a marketing gimmick on KFC's part to reinforce the tastiness of its chicken. For a year now the fried chicken chain has been overshadowed by Restaurant Brands International's (QSR -3.01%) Popeyes chain, which has enjoyed phenomenal success with its fried chicken sandwich.

KFC's comparable-store sales have tumbled 15% so far in 2020, compared to Popeyes, which has notched gains of 26% and 25% over the first two quarters, respectively.

This also isn't the first time KFC abandoned the slogan, having replaced it in 2011 with the forgettable "So good" line as it tried to project a healthier image. It had just brought back the "Finger Lickin' Good" tagline this February.

KFC says its iconic slogan will return when the "time is right."