Please ensure Javascript is enabled for purposes of website accessibility
Log In Help Join The Motley Fool
Free Article Join Over 1 Million Premium Members And Get More In-Depth Stock Guidance and Research
By John Ballard – Aug 26, 2020 at 7:14AM

The pandemic boosted sales of gaming laptops, but a strong slate of new games this holiday could cause another wave of strong demand.

NVIDIA (NVDA -0.66%) continued to experience strong momentum in the gaming segment last quarter. The RTX upgrade cycle is in full swing, but most of NVIDIA's users of its GeForce family of graphics processing units (GPUs) haven't upgraded yet. Despite competition from rival Advanced Micro Devices (AMD -1.22%), NVIDIA expects a strong second half of the year for its gaming business.

NVIDIA's gaming segment comprised 43% of its total revenue in the fiscal second quarter. While NVIDIA is experiencing explosive growth in its data center business, which became its largest source of revenue for the first time, growth in gaming was robust, up 26% year over year.

"Gaming's growth amid the pandemic highlights the emergence of a leading form of entertainment worldwide," CFO Colette Kress said during the company's conference call. 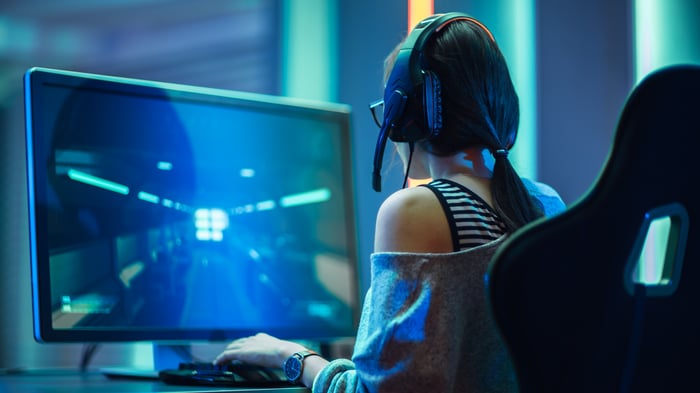 While the pandemic disrupted sales of NVIDIA's gaming products at the beginning of the pandemic, demand quickly shifted online. Momentum picked up when iCafes in China reopened and as more people started buying laptops to work and play games at home.

Demand was also sparked by NVIDIA partnering with manufacturers to deploy over 100 new notebook models powered with GeForce graphics cards at various price points. The RTX series is popular for its ray-tracing graphics technology, which will be in a laptop form factor for the first time.

The highly anticipated Cyberpunk 2077, along with the new Watch Dogs, will support ray tracing and could spur further upgrades to RTX cards by GeForce users.

Moreover, the new game consoles from Sony and Microsoft will also support ray tracing. Support for this technology has been growing on PC, but it will take off when the PlayStation 5 and Xbox Series X launch this holiday season. While AMD is providing the graphics chips for the new consoles, NVIDIA will still benefit.

Many of the top games on console also release with a PC version. As game developers start including ray tracing for console titles, NVIDIA should see even greater demand for RTX cards, with more new PC games featuring the technology.

It's for these reasons that NVIDIA CEO Jensen Huang stated, "I think this may very well be one of the best gaming seasons ever."

It's understandable that this growth stock is hitting new highs. The data center business is booming, but NVIDIA's core gaming business continues to deliver, and there are growth catalysts on the horizon to maintain healthy demand.