The financial services company has an edge when it comes to dividend security, especially in a volatile environment.

Long-term investors shouldn't be too fussed about the impact of COVID-19 on the stock market. Great companies will surpass the market's gains over years, and short-term downturns and periods of volatility are tolerable, even expected, on the way to a comfortable retirement portfolio.

Investors may be impacted in the near term, however, in the form of suspended dividends. Many companies need to shore up cash to keep going despite the negative impact of the pandemic. Some of them have done lots of cash-flow gymnastics to keep liquid funds available, including suspending or reducing dividends. Others have been close to cuts but have managed to keep their dividends alive.

If you're an income investor who doesn't want to worry about companies suspending their dividend payments, consider buying American Express (AXP -0.48%).

Keeping its head above water

American Express has suffered right along with the economy, as the state of U.S. spending is reflected in its earnings statements. In the second quarter, revenue declined 28% and earnings per share fell 86%. While spending plummeted during the pandemic as unemployment soared, trends have reversed and improved as stores have reopened. American Express user spending declined 40% in April and slowly moved up to a 20% decline in mid-July. 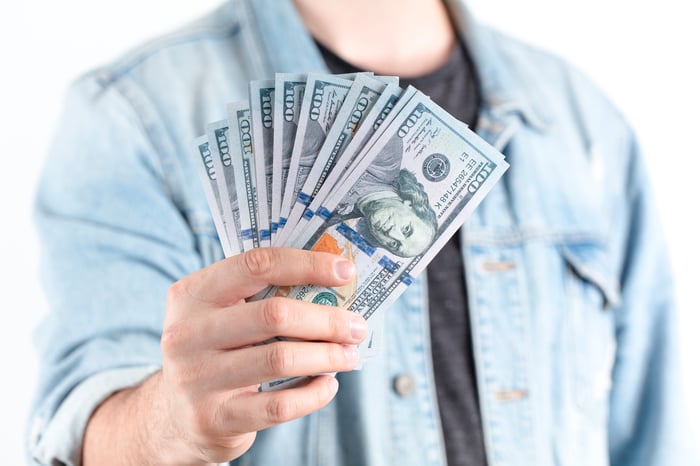 Despite the setbacks, American Express turned a profit during the quarter. Whether from their homes or in stores, people need to spend on the basics, at the very least, as Walmart's and Target's recent stellar earnings reports indicate.

One way American Express does not reflect the general state of the economy is that the typical American Express user is more affluent than average. Users are more likely to have enough money to spend even beyond the basics during a rough economy, and that benefits American Express. It also collects fees from customers that pad its top line, contributing 15% of the total and rising 15% despite COVID-19.

Another benefit of an affluent target base is that users are less likely to default on credit and loans. The company doesn't have to set aside huge provisions for losses, which leads to an increased bottom line. That's why American Express was able to generate $0.29 in earnings per share while some banks, such as Capital One Financial and Wells Fargo, increased their respective provisions for losses by high amounts and reported losses.

American Express increased provisions for losses by $628 million for a total of $1.6 billion, and ended the quarter with $61.4 billion in cash and investments. This puts the company in an excellent position to keep paying its dividend, which cost it $366 million total in the second quarter. On the earnings call at the end of July, CEO Stephen Squeri said, "We continue to have significant flexibility to maintain a strong balance sheet in periods of uncertainty or stress," which puts it ahead of many other financial institutions.

While the financial services company offers business loans, it isn't affected by the same regulatory supervision as banking companies. It wasn't subject to the Federal Reserve's bank stress test in June that determined whether banks could give dividends at all.

One of the reasons investors choose bank stocks is for their dependable dividends. With large cash loads, banks are able to keep steady and growing dividends. But in a recession, that ability dwindles, and the Federal Reserve might determine that banks need to meet a minimal requirement to pay the dividend. After the economic crisis in 2009, JPMorgan Chase reduced its dividend, while Citibank didn't pay one at all for several quarters. American Express continued to pay its regular dividend, as it continues to do now.

American Express' stock has returned 12% over the past three years, more than any large U.S. bank. It's more immune to the factors that deplete bank cash reserves meant to go back to investors in the form of dividends. As far as financial stocks go, American Express is a good choice for many reasons. But if an investor is searching for a secure dividend, American Express is the way to go.

Why Did Rapper Jack Harlow Get a Shoutout on AmEx's Recent Earnings Call?
376%