A big change in Fed policy is good for stocks, while a 15-minute coronavirus test is great for a lot of businesses.

After spending the first half of the trading session down as much as 0.3%, the S&P 500 Index (^GSPC -0.19%) rallied in the afternoon, closing up 0.2% on August 27, following news that the U.S. Federal Reserve was making what looks like the biggest change in its policy-setting framework in decades. The change bodes well for stocks, if not so great for many consumers or investors who own bonds.

Additionally, news that broke yesterday is having a positive lift for the market: Abbott Laboratories (ABT -0.42%) was expected to receive emergency use authorization from the U.S. Food and Drug Administration for its 15-minute coronavirus test. It has now officially received that authorization.

Between the continuation of the Fed's low-rate policy focus and the prospects for a low-cost, fast-result test, investors are piling into stocks expected to be beneficiaries of both. Five of the nine biggest-gaining S&P stocks today were airline and cruise stocks, while Abbott Labs was the second-biggest gainer, up 8.2%. Today's best-performing S&P 500 component was Live Nation International (LYV 0.25%), with shares up 8.9%. 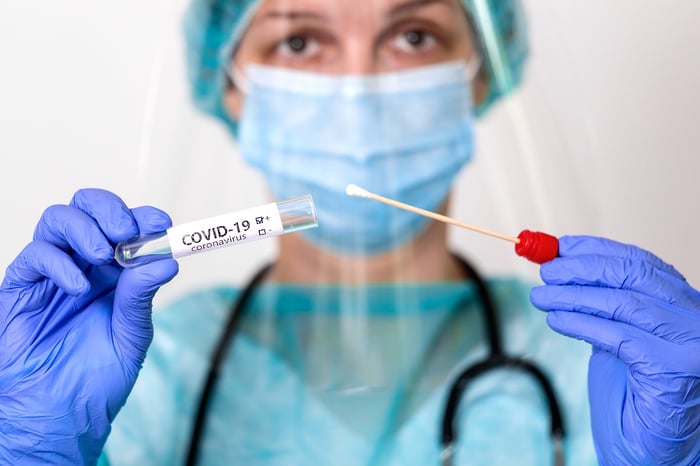 Abbott's BinaxNOW COVID-19 Ag Card test could prove a real game changer. At only $5 and taking about 15 minutes to deliver results, this test is both cheap and fast. First responders and essential workers -- the groups most at risk of exposure to the coronavirus on a daily basis -- will be among the first to undergo the test.

But the prospects for wider use are even greater. It's possible that cruise ships, commercial air travel, concerts, and other public events could also be opened up to larger numbers of people.

Abbott says it will ship tens of millions of tests starting within a few weeks and will be able to make as many as 50 million per month by October. At $5 a pop, that's $250 million per month in revenue the company could pick up for as long as COVID-19 remains a public health risk.

There are limitations. The test must be administered by a healthcare professional, so there's additional expense to have trained professionals ready to administer the test that businesses will have to cover. Moreover, there are accuracy concerns: Data suggest 3% of those who are positive will test negative, and about 1.5% of people who test positive will actually be negative.

Live Nation, one of the world's largest promoters and producers of live entertainment events, has seen its business all but shut down this year, so the prospects of being able to bring more in-person events back before the end of the year would be huge. Investors certainly like the prospects, sending its shares, which are still down 25% from the 2020 high, up sharply today.

In addition to the potential prospects of being able to move a little closer to normal operations via rapid, low-cost testing, these companies all would benefit from the Fed making low interest rates a priority. As a group, these five companies carry more than $70 billion in debt, mostly in junk bonds, and they have all added significantly to their debt loads this year, raising cash just to remain solvent. 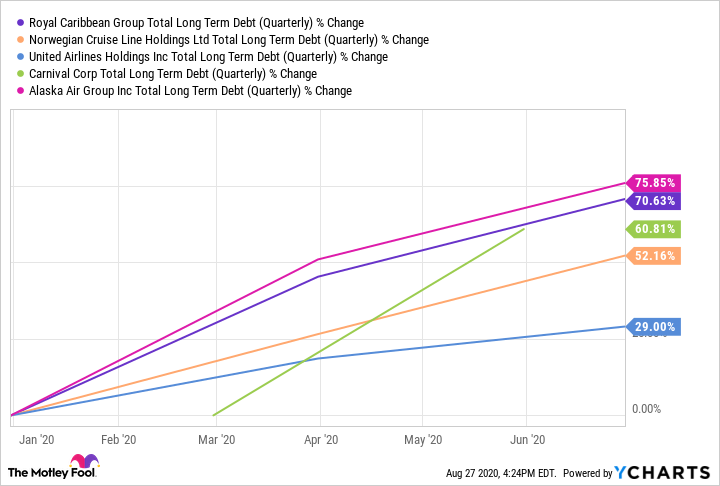 Today's big gains are on something that could prove meaningful and material, but it's very unclear how quickly -- or slowly -- rapid, low-cost testing could be rolled out in a significant way.

These heavyweights are usually the tail that wags the market dog, so to speak, and it takes a very broad movement by the market as a whole to counter their direction. That happened today, with well over 300 of the S&P 500 component stocks moving higher today, helping the index close in positive territory.

Walmart and Microsoft up on TikTok deal prospects

Microsoft shares moved higher while its fellow mega-cap tech giant's shares fell, after CNBC broke the news that it, along with Walmart (WMT 0.55%) were now the leading bidders to acquire TikTok's North American and some other geographical operations. While Microsoft has long been considered a top bidder for the Chinese video-sharing platform, the surprising addition of Walmart in a partnership, which the company has confirmed, has excited investors. Walmart shares gained 4.5% today.

Whether the tech and retail giants' partnership will result in a winning bid remains to be seen. ByteDance, the Chinese company that owns TikTok, has filed suit against the Trump Administration over the President's executive order that would essentially ban TikTok in the U.S., and it's not clear whether a sale will happen or not.

Moreover, investors need to consider whether buying TikTok at all even makes sense for the two companies or will deliver meaningful value for shareholders. Stay tuned for more as the story develops.

The Dow Spikes as Citigroup Settles for $7 Billion, Beats on Earnings

Johnson & Johnson Falls on a Shaky Day From the Dow