Both of these mutual funds are leaders in their asset class, but one is slightly better.

In addition to stocks, a strong investment portfolio should include a selection of mutual funds, which provide great diversification, particularly in these volatile times.

Passively managed index funds and ETFs have dominated in the past decade in terms of assets, and for good reason -- the stock market has been on a historic bull run, so index funds and ETFs gave investors great returns at low costs. But when markets are more volatile, many investors turn to actively managed funds, as the portfolio managers can pick the stocks to best navigate the market's ups and downs.

While there are thousands of mutual funds to choose from, large-cap growth mutual funds have been among the most steady performers. Specifically, the focus here is on blue chip large-cap stocks, which are stocks of large, established companies that are often leaders in their respective industries. Blue chips tend to be solid long-term performers and are well-suited to navigate more volatile markets. 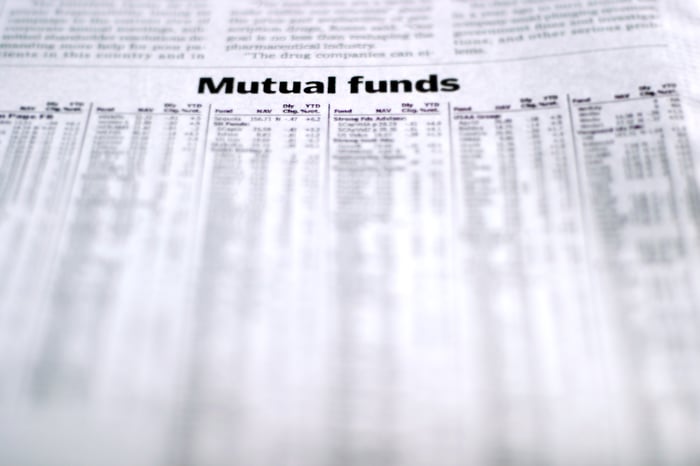 The Fidelity Blue Chip Growth Fund has been one of the top-performing mutual funds both now and over the long term. According to Fidelity, the fund was up about 28% in 2020 (through July 31),  beating its benchmark, the Russell 1000 Growth index (18.2%), and the average large-cap growth fund (15.4%) over the same time frame.

Fidelity Blue Chip Growth also posted market-beating returns over the three, five, and 10-year periods. Fidelity reported that over 10 years the fund has an average annual return of 18.8% (through July 31), better than the Russell 1000 Growth, up 17.3%, and the average large-cap growth fund, up 15.5%.

The fund, with $31 billion in assets, invests about 80% of the portfolio in blue chips with approximately 45% of the portfolio going to its top 10 holdings, which include Amazon, Apple, Microsoft, Alphabet, Facebook, Tesla, Marvell Technology Group, salesforce.com, and Visa. The fund, which holds about 426 stocks, is underweight the Russell 1000 Growth Index in information technology, healthcare, financials, and consumer staples; and overweight in consumer discretionary, communication services, industrials, and energy.

The portfolio manager, Sonu Kalra, has been at the helm since 2009. Kalra looks for firms with a combination of the following traits: competitive advantage, high barrier to entry, pricing power, and strong management. In the second quarter, the outperformance of the benchmark was fueled by consumer discretionary, information technology, healthcare, and communication services sectors with Tesla, VectoIQ Acquisition, Sea Limited, Marvell Technology Group, and Pinduoduo among the top performers.

Also, it has a pretty low expense ratio of just 0.8%, which means that for every $1,000 invested, $8 goes to administrative and management fees. That's lower than the average expense ratio for actively managed large-cap funds, which is about 1.25%.

The T. Rowe Price Blue Chip Growth Fund is a bigger fund than its Fidelity counterpart, with about $85 billion in assets under management.

Like the Fidelity fund, it is one of the best performers in this asset class. According to T. Rowe Price, the fund was up 19.6% year-to-date through July 31, beating its benchmark, the S&P 500 index (17.2%), and the average large-cap growth fund (15.5%) over the same time frame. It also beats its benchmark over the three, five, and 10-year periods. Over the past 10 years through July 31, it has an annualized return of 18.3%, better than the 13.8% annualized return of its benchmark over that same time period.

This fund is different from the Fidelity fund in a few noteworthy ways. First, it has far fewer holdings with just 121 stocks, compared to 456 stocks for the Fidelity fund. The top 10 stocks make up 50% of the portfolio, with Amazon, Facebook, Alphabet, Microsoft, Alibaba, Apple, Visa, Tencent, Paypal, and Mastercard as the largest positions.

The turnover ratio is fairly low at 30%, compared to 34% for the Fidelity fund, which is not surprising given the concentration of holdings. This fund is heavily overweight in IT, consumer discretionary, and communication services. These three sectors make up about 79% of the portfolio, with IT accounting for about 37.6% of that total. In contrast, the benchmark has about 49% in these three sectors. The fund is underweight in healthcare and financials.

Larry Puglia has led the fund's portfolio management team since 1993. Puglia and his team look for companies that are market leaders with stable earnings, growth in free cash flow, good management of excess capital, and a consistently high return on capital. It also has a low expense ratio of 0.69%, which is even below that of the Fidelity Blue Chip Growth Fund.

These are both top tier large-cap growth funds, but the Fidelity Blue Chip Growth is slightly better. The Fidelity fund scores better returns across the year-to-date, 1-, 3-, 5-, and 10-year periods, with a comparable expense ratio.

Further, the Fidelity fund has a higher Sharpe Ratio at 1.11 vs. 0.93. The Sharpe Ratio is the measure of a fund's risk-adjusted return, so the higher the ratio, the better the return relative to its risk. Also, with a broader portfolio and less concentration, the Fidelity Blue Chip Growth Fund should be better prepared to navigate the market's ups and downs and maximize returns.

Is the T. Rowe Price Blue Chip Growth Fund a Smart Choice for Your IRA?
376%