Stocks of Canadian weed growers have done nothing but disappoint investors this year. Given cheaper prices in the black market, oversupply lingering on shelves, demand falling below expectations, store closures from the effects of COVID-19, and mass inventory writedowns, many are wondering if the sector will ever recover.

However, one of the most well-known rules for investment success according to Warren Buffett goes like this: "We simply attempt to be fearful when others are greedy and to be greedy only when others are fearful." Indeed, with the marijuana industry so battered, investors now have the opportunity to buy stocks at a price they would never have imagined possible during the height of the cannabis bubble. Today, let's take a look at one such company, Tilray (NASDAQ:TLRY), and why it is simply the best growth stock to buy now. 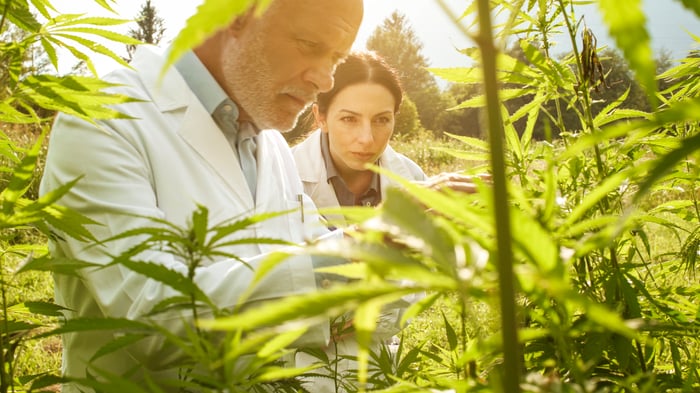 What's the logic behind investing in Tilray?

Tilray is well on its way to grow its sales, improve its margins, and achieve positive earnings before interest, taxes, depreciation, and amortization (EBITDA) by the end of the year. In Q2 2020, the company grew its revenue by 10% over last year, to $50.4 million, while maintaining its gross margin of about 26%. At the same time, Tilray's EBITDA loss narrowed from $18.7 million in Q2 2019 to $12.3 million.

While 10% revenue growth isn't all that impressive, it is important to note that the average selling price of the company's cannabis decreased by as much as 43% over last year due because of the one-time effects of terminating a supply contract. With that taken care of, Tilray's Q3 sales growth will likely surpass Q2's.

Medical marijuana has made up nearly $22 million worth of Tilray's revenue over the past six months, and the future only looks better. Over the next 36 months, more than 40 countries may take steps to legalize medical marijuana, and four additional countries may legalize recreational cannabis. By 2024, analysts estimate the global medical cannabis market will reach $44.4 billion.

Dozens of nations opening their doors to medical cannabis is no joke. And Tilray is primed to tackle this market opportunity thanks to its sizable international growing and distribution infrastructure, with operations in Germany, Portugal, Australia, Latin America, and beyond. What's more, the company is diversifying its revenue mix further with the launch of "Cannabis 2.0" products, such as edibles and vapes. These new ventures now account for approximately 13% of Tilray's overall revenue.

Currently, Tilray has a market cap just north of $800 million, and it's trading for four times price-to-sales. That is an incredibly low price for a company that is growing its revenue by these percentages.

In the past quarter, the company was able to raise $85.3 million with a share offering and $60 million in debt financing, which is an impressive feat. It's still relatively financially healthy, with more than $137 million in cash on its balance sheet as of June 30.

Overall, Tilray's growth will likely rebound sharply in the coming quarters. I'd expect it to skyrocket within the next two years as more and more countries worldwide join the legalization bandwagon. For long-term investors who are looking for a good weed stock, Tilray is a fantastic bet.