Please ensure Javascript is enabled for purposes of website accessibility
Log In Help Join The Motley Fool
Free Article Join Over 1 Million Premium Members And Get More In-Depth Stock Guidance and Research
By Adam Levine-Weinberg – Updated Aug 31, 2020 at 10:29AM

A turnaround may be on the horizon, but Ford faces tough sledding for the next year or so.

Ford Motor (F -3.60%) shareholders probably feel as if they've been waiting endlessly for a turnaround. The iconic automaker earned a record pre-tax profit of $10.8 billion in 2015. However, it's been all downhill from there.

Last year, Ford's adjusted pre-tax profit was just $5.4 billion. The COVID-19 pandemic has made matters even worse in 2020, putting the company on track for a full-year loss. In this context, it's not so surprising that Ford stock has lost about half of its value over the past five years. 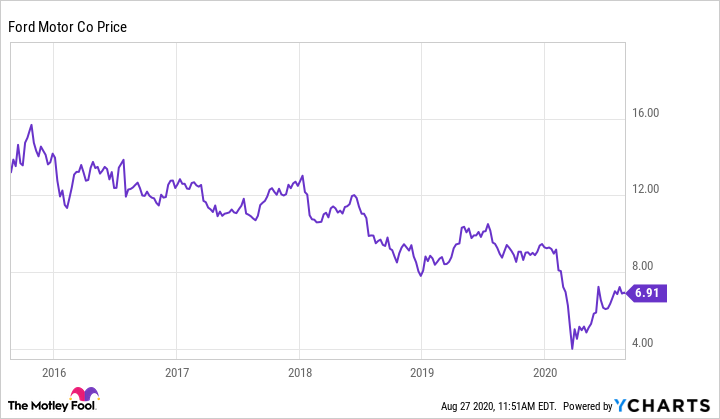 Despite this poor track record and the widely acknowledged threat from electric vehicles, Ford has what it takes to recover. However, pulling out of the current rut will take time. As a result, investing in Ford stock now requires incredible patience.

The F-150 changeover is approaching

The biggest near-term headwind that Ford faces is the upcoming changeover to a next-generation F-150 model. The F-150 pickup is a huge cash cow, selling in high volume and at high margins. Still, the current vehicle architecture was introduced six years ago, so it's due for an update.

Ford will need to retool its F-150 plants in Dearborn, Michigan and in the Kansas City suburbs to prepare for building the new models. The company plans to pause production in Dearborn for two weeks beginning on Sept. 7 to complete the changeover, according to the Detroit Free Press. It will undertake a similar changeover at the Kansas City plant in October.

Even after the changeovers are complete, it will take time to ramp back up to full production volume as workers learn how to build the new models. As a result, Ford may lose about 100,000 units of F-150 production this fall, according to analysts at Benchmark Company. Ford will wind down production of the prior-generation F-150 this fall. Image source: Ford Motor.

Given that Ford can earn $10,000 or more in profit on each F-150 sold, the impact on its pre-tax earnings could surpass $1 billion. Indeed, CFO Tim Stone said that the F-150 changeover's cost in the fourth quarter would exceed the $600 million contract ratification bonus paid to Ford's UAW employees in the prior-year period. That's why Ford expects to swing back to a loss in Q4 after returning to profitability this quarter.

New SUVs have been delayed a bit

Ford's F-Series truck lineup has historically generated virtually all of the company's profit. (Frequently, a portion of Ford's truck profits have had to offset losses in its overseas operations.) That said, crossovers and SUVs -- especially larger ones -- also represent an important source of profit. Ford has three important new models on the way in this category: the Bronco Sport, the Mustang Mach-E, and the Bronco.

The first two models will start shipping later this year but won't have a significant impact on the company's 2020 performance. Moreover, production of the Mach-E electric performance SUV will be constrained by battery availability in the near term. The 2021 Mustang Mach-E has been virtually sold out for months. But if demand remains robust, Ford should be able to start ramping up output in 2022.

Finally, the Bronco is probably the most important of these three models from a financial perspective, having accumulated 150,000 reservations within a few weeks of being revealed. However, it won't reach customers until next June. That means Ford won't get a full year of high-margin Bronco sales until 2022.

A risky stock with upside

The F-150 changeover and the launch of the Bronco Sport, Mustang Mach-E, and Bronco between now and mid-2021 should drive a big improvement in Ford's performance in North America beginning in the second half of next year and accelerating in 2022. Cost-cutting efforts in other regions should also contribute to earnings growth.

That said, for now, Ford's earnings are weak, and it has a junk-rated balance sheet. Furthermore, Ford expects to incur up to $7 billion of cash charges by 2022 related to its global restructuring. So far, it has only paid out around $1.4 billion. The combination of weak earnings and high restructuring costs could weigh on near-term cash flow, adding to the risk related to Ford's subpar balance sheet.

To own Ford stock, you must be willing to ride out some volatility as the company ramps up output of its next-generation models. Furthermore, you must accept the risk of something going wrong -- whether that be tougher-than-expected competition, a sharp downturn in auto demand, execution missteps, or something else -- in the next year or two. For patient investors willing to accept those risks, Ford stock could turn into a very profitable investment over the next several years.