Apple's (NASDAQ:AAPL) stock split is on track to be a resounding success. The tech giant's share price has climbed roughly 30% since the company published second-quarter results and announced the 4-for-1 split at the end of July, and the recent fervor over the move has prompted speculation about which other large companies might carry out their own splits.

Perhaps no other company in the tech sector is a better candidate than Amazon (NASDAQ:AMZN). The e-commerce and cloud computing giant's shares currently trade at roughly $3,400 a pop, and it's been more than two decades since the company orchestrated a stock split. Here's why Jeff Bezos and Co. could soon join the stock-splitting fray. 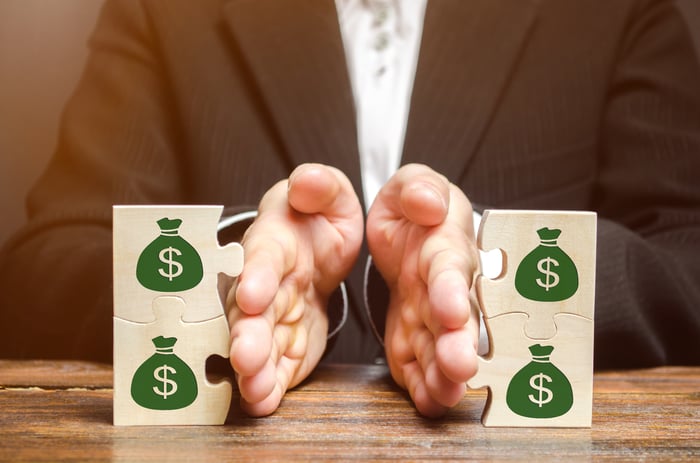 What would a stock split mean for Amazon?

A stock split wouldn't have any direct impact on the e-commerce pioneer's market capitalization -- it would simply increase the company's share count and reduce its stock price by a proportional amount. For example, if a 10-for-1 stock split happened tomorrow, a person holding one share of Amazon stock at $3,400 per share would find they now held 10 shares valued at $340 each.

Amazon's market cap would hold steady at approximately $1.7 trillion if this hypothetical split took place, and Jeff Bezos (the company's CEO and largest individual shareholder) would still be sitting pretty with a net worth of roughly $200 billion. However, the act of making shares easier to buy for smaller investors could have the effect of increasing the appeal of owning Amazon stock and ultimately boost the company's valuation -- just as it seems to have done for Apple and Tesla (NASDAQ:TSLA).

Tesla's post-split momentum has been even more impressive than Apple's, with the electric vehicle maker's stock soaring roughly 60% since the company announced plans on Aug. 11 for a 5-for-1 split. While gains for the broader market and each company's respective business momentum have played big roles in the stock gains, it appears the stock splits have also been catalysts.

Splits could be coming back in style

The market is going gaga for stock splits, with the recent moves from Apple and Tesla prompting soaring interest among investors and speculation about which other companies will be next to get in on the action. Just take a look at this chart tracking search interest for the term "stock split" over the last year courtesy of Alphabet-owned Google Trends.

The explosion of interest over the last month would look even starker if you adjusted the search parameters on Google Trends to track searches for the term over the last five years. While business results will still be the most important factor in a stock's long-term performance, there are actually some good reasons for the recent hype around splits.

Lower share prices tend to make stocks more accessible. With surging activity among retail investors this year due to market volatility and the popularity of apps like Robinhood, that kind of accessibility has added appeal. It's reasonable to think that more management teams will look at the Apple and Tesla splits and see compelling reasons to carry out their own splits.

A stock split makes sense for The Everything Company

Amazon went public in 1997 and has conducted three stock splits in its roughly 23 years as a publicly traded company. However, these moves all occurred very early in the e-commerce pioneer's history, with the last one orchestrated in September 1999.

The company's split-adjusted share price has climbed roughly 173,500% since its market debut -- a staggering figure made possible by dominant performance in online retail and cloud computing. While the ability to purchase fractional shares has recently become more widely available and removed obstacles to purchasing stocks with high prices, not all stockbrokers offer this option. Large share prices can also be a psychological barrier to some investors.

There's another potential perk worth mentioning. A stock split could give Amazon the opportunity to be included in the Dow Jones Industrial Average. The DJIA is price-weighted, and Amazon's current stock price is a barrier to inclusion because it's so much higher than any other company included in the index. Being added could create positive catalysts for the company's share price because the stock would be included in funds that track the index, and investors who bought those funds would also be buying Amazon stock.

Amazon has the second-highest share price of any U.S.-based company, trailing only Berkshire Hathaway's Class A shares, and the timing for a split seems to be right on the heels of success for Apple and Tesla's recent moves. How Bezos and the rest of the management team at Amazon feel about a split move remains to be seen, but there are certainly shareholders who are hoping Amazon follows Apple's lead.

Apple Just Split Its Stock: Here's Why This Tech Stock Might Be Next @themotleyfool #stocks $AMZN $AAPL $TSLA Next Article
Current