Consumer electronics giant Apple (AAPL 1.37%) is preparing to launch several new products in the fall, including four iPhone models equipped for 5G wireless networking. The company has instructed its manufacturing partners to build between 75 million and 80 million of these 5G iPhone devices by the end of the year, according to Bloomberg's anonymous sources.

The new iPhones will reportedly launch two regular iPhones and two Pro models. All of them should feature organic light-emitting diode (OLED) screens, a feature that was reserved for Pro models in last year's iPhone update. Buyers will have several choices of screen sizes, including a Pro model with a 6.7-inch display -- the largest screen Apple has ever used in an iPhone. The design choices across the board will be based on 2019's Pro models with squared edges.

The higher-end iPhones will continue to feature stainless steel body edges, while the consumer-grade iPhones should have aluminum sides. At least one of the Pro models will reportedly borrow the light detection and ranging (LiDAR) camera seen in current iPad Pro tablets. These laser-based environment scanners can give apps a more detailed picture of the device's real-world surroundings, which is helpful for augmented reality programs and some high-end security features. 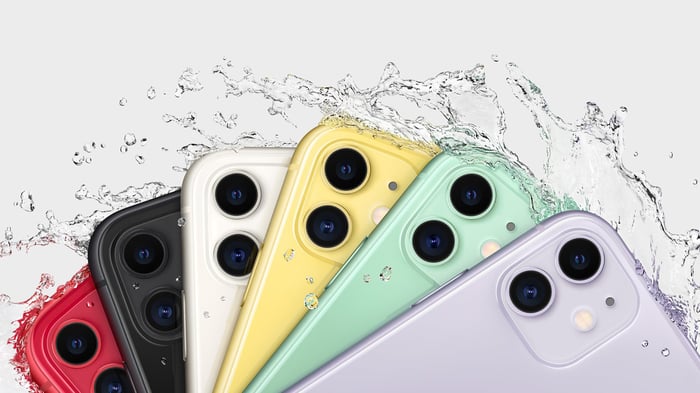 Other upcoming Apple devices include two new Apple Watch versions, a smaller HomePod smart speaker, an updated iPad Air, and a set of over-ear headphones. These headphones won't carry the Beats brand, according to the Bloomberg report's anonymous insider sources.

The goal of shipping at least 75 million next-generation iPhones is comparable to the year-ago period's iPhone shipments. Investors and analysts have been concerned about the COVID-19 pandemic undermining demand for high-end devices, such as 5G smartphones, for the upcoming holiday season. Apple's robust manufacturing order could be a good sign for the holiday shopping season.