Even as the calendar flipped to the next page, the stock market didn't lose any of its momentum. Fresh new records for the S&P 500 (^GSPC -0.07%) and Nasdaq Composite showed that investors remain confident in the future for stocks, and the gains even trickled down into the Dow Jones Industrial Average (^DJI 0.08%). Even with September having a reputation as the stock market's worst statistical month, worries didn't bring down market sentiment in any visible way.

With two high-profile stocks having done stock splits recently, some investors think that other companies with high share prices should follow suit. Today, Chipotle Mexican Grill (CMG -1.64%) and Shopify (SHOP -0.47%) both saw solid advances, and although neither of them has announced any plans to split their shares in the near future, their stock prices are definitely at a level that would warrant such a move if they choose.

Wedbush was first to jump on the bandwagon, raising its price target on Chipotle shares by $280 to $1,600 per share. The analyst company kept its outperform rating on Chipotle stock, arguing that it believes that Chipotle's same-store sales growth has rebounded nicely from the hit that the entire restaurant industry took during the worst of the COVID-19 pandemic. Wedbush also thinks that Chipotle will extend its competitive advantages over its peers as things continue to progress. 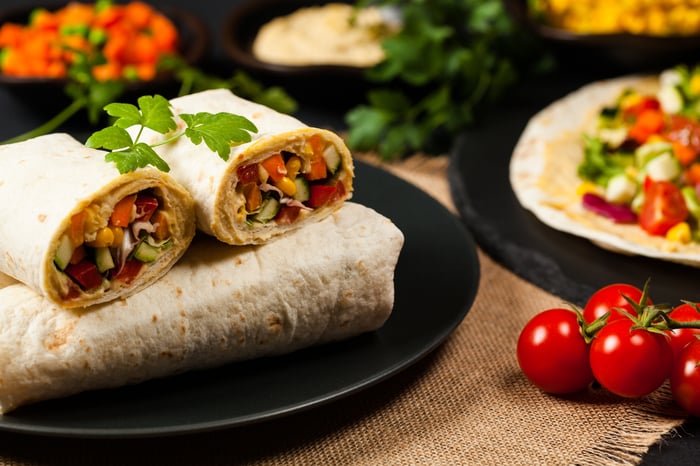 Later, Stifel chimed in as well, boosting its price target by $300 to $1,400 per share. Analysts there still rate the company a hold, but they do agree that comps will come in more favorably than initially expected. Although the current valuation already reflects Chipotle's strength, Stifel acknowledges that the chain has fought through challenges quite well.

Chipotle has never done a stock split, so until the recent moves from other high-profile companies, few expected it ever would. Now, though, such a move might be on the table if it can help raise awareness of Chipotle's growth story.

Shares of Shopify rose more than 6% on Tuesday. That brought the Canadian e-commerce enabling specialist to an all-time high, but many still think the company has further to climb.

Shopify didn't get any Wall Street analyst love today, but it's benefited from bullish views recently. Last week, analysts at Atlantic Equities gave Shopify an overweight rating, with a price target of $1,150 per share that the company came close to reaching today.

Many investors remain concerned about valuations by traditional metrics for Shopify and similar companies in the tech field. Yet Shopify actually has several areas in which it can continue to expand. For instance, although it already allows clients to build highly effective e-commerce websites, Shopify hasn't yet tapped fully into all the ancillary services that retailers need to sell their goods online. Areas like fulfillment could be a bigger revenue source for Shopify going forward and help bolster growth.

Shopify only recently pushed into four-digit territory with its stock price, and the tech company is already the most valuable in Canada by market capitalization. Shopify has never split its stock, but now wouldn't be a bad time to consider doing just that.

This Threat Could Mean Disaster for the Bull Market in Stocks