Investors are suffering on Thursday morning, but it's important to keep perspective.

The Nasdaq Composite (^IXIC -1.19%) has been a huge performer for much of 2020, bouncing back quickly from the COVID-19 bear market in late February and March and soaring to new record highs. Yet all of that turned around on Thursday morning, as the index quickly plunged more than 600 points, or 5%, shortly before noon EDT. The move was so abrupt that it took many investors aback with its ferocity.

For a while now, many market participants have believed that the Nasdaq's gains were unsustainable. It's tempting to declare that the bull market in stocks must now be over, especially with plenty of uncertainty about the pandemic, the geopolitical situation, and the economic strains faced by those in the U.S. and around the world. Yet before you decide that the end is near, it's important to keep some perspective. 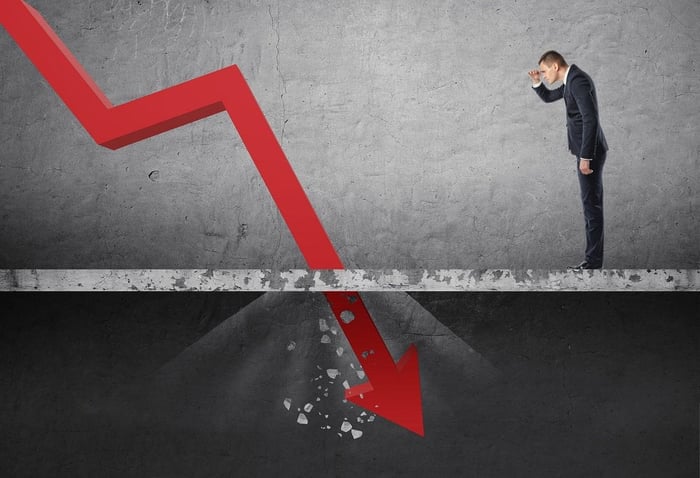 Where the Nasdaq is, and where it's been

That sounds like a disaster, and if you look at your brokerage account on a one-day basis right now, you'll probably see plenty of red ink.

But here's something to think about: It was exactly seven trading sessions ago that the Nasdaq set a new record high. It turned out to be one of eight days out of nine in which the index reached new heights for the first time. The reason it's remarkable here, though, is that its closing level that day -- Aug. 25 -- was 11,466.

Yes, some investors are in a panic because the Nasdaq has fallen to levels that it first saw a week and a half ago. On the day that new record was set, the Nasdaq was up more than 700 points just since the beginning of August. That monthly gain had only added to immense boosts in April, May, June, and July.

If that seems to you as though investors have totally lost their perspective, then you're on the right track. Just because the market has corrected after huge gains doesn't mean that the bull market is over.

There are plenty of people looking at their individual holdings and feeling even more uncertain. In some cases, percentage losses for individual companies are much greater than the market's decline. Big drops include some of the leaders of the bull market.

Again, though, the declines aren't all that big when put into context:

That last point is worth visiting in more detail. Zoom announced blockbuster earnings for the second quarter. That sent its stock up as much as $150 per share. But if the stock had simply risen $50, investors would've been happy with the gains. Somehow, the fact that it jumped higher and settled out at current levels is worse than if it had simply risen without the big volatility.

The lesson here is that if you look at the stock market's moves on a daily basis, they'll distract you from the long-term value creation that the Nasdaq has done such a good job of providing to investors for decades. If you have a long-term strategy, stick to it -- and don't worry about whether this is a one-day aberration or the beginning of a more extensive correction.