The stock market has moved sharply during the summer months, lifting many major market benchmarks to record levels. However, many market participants have been nervous about the potential for a severe correction after such strong gains over the past six months. That fear took shape in the market on Thursday morning. Just before 11 a.m. EDT, the Dow Jones Industrial Average (DJINDICES:^DJI) was down 237 points to 28,863. The S&P 500 (SNPINDEX:^GSPC) lost 61 points to 3,520, and the Nasdaq Composite (NASDAQINDEX:^IXIC) suffered the most, plunging 368 points to 11,685.

Many of the most popular stocks in the market during 2020 were among those hit hardest in the downturn. However, cruise ship stocks bucked the trend and moved higher. Below, we'll look at why investors got more optimistic about cruise operators even though they've gone most of the year without any sailings. 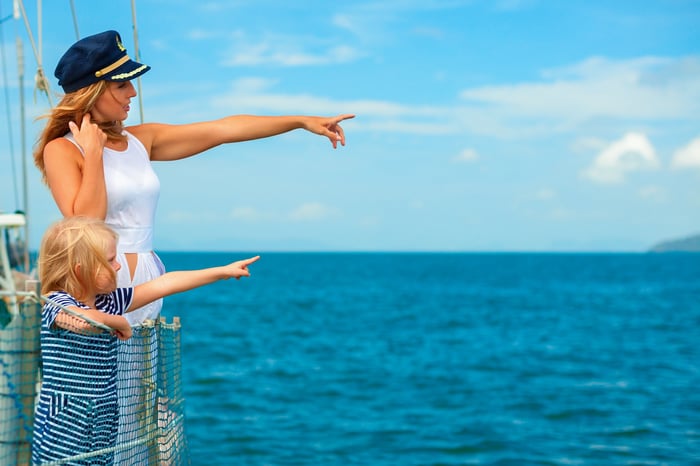 It's a party at Carnival

The entire cruise ship industry did well in the stock market on Thursday. Leading the way ahead was Carnival (NYSE:CCL), whose shares climbed 8% in mid-morning trading. Norwegian Cruise Line Holdings (NASDAQ:NCLH) fared nearly as well with a 7% gain. Bringing up the rear was Royal Caribbean Cruises (NYSE:RCL), but even it managed to give shareholders a 5% boost.

The immediate news giving cruise stock investors something to celebrate came from Carnival. The company's Costa Cruises brand, which is based in Italy, said it would start making sailings from Italian ports on Sunday, Sept. 6. Carnival will then follow up with its Germany-based AIDA Cruises brand, offering cruises from the Canary Islands starting Nov. 1.

The start-up will be gradual. Costa will have two ships sailing, with weekly cruises from Trieste to several destinations on the Italian coast. To start out, only Italians will be able to set sail on the Costa cruises. For AIDA, the move is just the beginning, with more extensive service in the Western Mediterranean and the Persian Gulf region coming in December.

Carnival said it's worked hard to develop COVID-19 protocols that will meet regulatory standards in various jurisdictions around the world. Investors clearly believe the work Carnival's done will translate to the U.S. as well, and they're hopeful that this means Carnival and its peers could get back to something resembling normal operations by the beginning of 2021.

Will the good times last?

What's amazing is how well cruise ship stocks have done during this long period of nearly no activity. In a manner that's unusual for the stock market, investors have taken an extremely long-term view of the cruise industry in choosing to provide additional funding to carry the operators through nearly a full year of essentially zero revenue.

But investors shouldn't think the tough times will be over for cruise operators once they're able to set sail. There's a huge amount of pent-up demand for cruises, but the companies have also been generous about offering refunds and additional credit toward future voyages to their loyal customers. That means that even after cruise ship companies start operating again, it'll be a while before their profit margins return to typical levels.

It's still possible that Carnival, Norwegian, and Royal Caribbean will emerge relatively unscathed from the pandemic. However, their stocks will likely remain volatile even as sailings get under way. Only once a clear end is in sight will shareholders be totally confident about the future for these hard-hit travel stocks.