Please ensure Javascript is enabled for purposes of website accessibility
Log In Help Join The Motley Fool
Free Article Join Over 1 Million Premium Members And Get More In-Depth Stock Guidance and Research
By Rachel Warren – Sep 4, 2020 at 6:37AM

It's time to prep your portfolio for the next market downturn.

You've likely heard the phrase, "What goes up must come down." Well, Sir Isaac Newton's quote is applicable to more than just the laws of physics.

After the stock market plunged into bear territory more than five months ago, investors scrambled to sell off apparent losers, buy stocks at a discount, and scoop up shares of companies entering the coronavirus vaccine race. This week, the S&P 500 Index seemed on its way to achieving the most monumental gains it's seen in four decades, as if the March crash had never happened.

If you have been following the coronavirus vaccine race and want to get in on the action, there's no time like the present. More than 170 potential vaccines are currently being studied and developed by various companies. Johnson & Johnson (JNJ -1.09%) and AstraZeneca (AZN -1.34%) have earned headlines and emerged as two of the most promising front-runners. Here's why these two stocks are a good play for the next market crash -- with or without a vaccine.

In the first quarter of 2020, Johnson & Johnson (J&J) achieved 3.3% earnings growth with $20.7 billion in sales reported for that three-month period. The impact of the pandemic was felt in the second-quarter, in which J&J reported a 10.8% year-over-year decline in overall sales at $18.3 billion. J&J saw a nearly 4% increase in sales in its pharmaceutical business during Q2, while sales in its consumer health and medical-device segments diminished by 3.4% and 32.5%, respectively. Stelara, Tremfya, and Symtuza were important revenue drivers in the second quarter.

J&J announced on Aug. 19 that it would be acquiring Momenta Pharmaceuticals (MNTA). This is a calculated move to expand the company's footprint in the autoimmune treatment space and also one of many green flags for the company's future.

J&J's coronavirus vaccine candidate is being developed by its subsidiary, Janssen Pharmaceutica. The candidate (Ad26.COV2-S) is in a phase 1/2a human trial in Belgium and the U.S. The timeline for the start of J&J's late-stage study of the vaccine will depend on early data from the trial that is currently in progress.

In July, the company released findings that Ad26.COV2-S had proven efficacious in a pre-clinical study of non-human primates, and shared a plan to commence a phase 3 study in September. J&J and the Biomedical Advanced Research and Development Authority (BARDA) agreed to co-fund the potential treatment's research, development, and clinical testing with $1 billion in late March. If the vaccine is proven safe and effective, the company has inked deals with the U.S. government to deliver up to 100 million doses and with the Canadian government to deliver up to 38 million doses.

Even though shares of the company fell sharply in March, J&J made a quick comeback. The stock is now sitting 2.6% above its January start and up about 16.6% from one-year ago. Johnson & Johnson is also popular with investors for its status as a Dividend Aristocrat. The company has increased its yield every year for the past 58 years. Its dividend yields 2.63%, well above the S&P's 2% average.

J&J has been in business for more than 130 years, and its history of providing consistent returns for shareholders has made it a favorite with novice and experienced investors alike during the pandemic. While the company's second-quarter numbers were less than ideal, it still raised its guidance for the rest of the year. Johnson & Johnson may hit some near-term bumps in the road, but I believe that it will continue to perform. 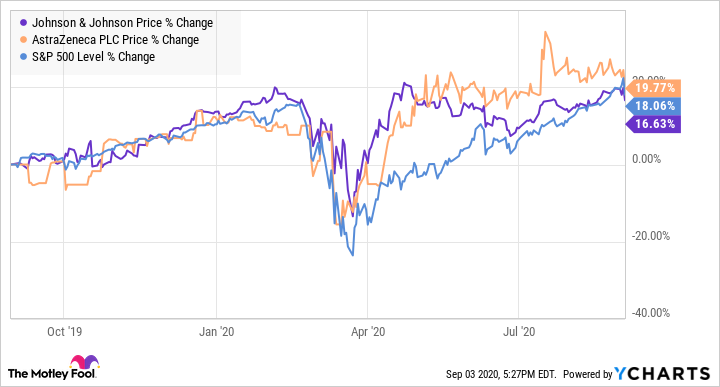 AstraZeneca released its financial results for the first six months of 2020 on July 30. The company's total revenue for the first half of the year went up by 12% to $12.6 billion, compared to the same period in 2019.

Revenue from AstraZeneca's oncology business rose 28% in 2020's first half, while its cardiovascular, renal and metabolism (CVRM) segment saw 8% revenue growth. Tagrisso, Farxiga, and Symbicort drove the company's exceptional performance in the first six months of the year, raking in sales of $2 billion, $848 million, and $1.4 billion, respectively. AstraZeneca finished the first half of the year with reported and core gross profit margins of 81%, as well as $6.1 billion in cash and investments.

The company has multiple irons in the fire of the coronavirus race, developing a vaccine candidate (AZD1222) and a dual antibody cocktail (AZD7442). AstraZeneca announced on Aug. 25 that it had administered its candidate to its first participants in a phase 1 trial of AZD7442 in the U.K. The double-blind, placebo-controlled study will focus on up to 48 adult subjects.

AstraZeneca's COVID-19 vaccine AZD1222 is being studied right now in phase 3 human trials in Brazil, South Africa, the United Kingdom, and the U.S. Additional phase 3 trials are slated to begin in Russia and Japan. In total, up to 50,000 adult subjects will be enrolled in these studies, with 30,000 of those participants in the U.S. trial alone.

Data from these trials should be released before the year is out. Interim data released in July from the phase 1/2 clinical trial of AZD1222 revealed that 91% of subjects had neutralizing antibodies one month after receiving a dose of the treatment candidate. The data also showed that the vaccine elicited T-cell reactions in all subjects and was generally well-tolerated.

AstraZeneca stock didn't move much when the market plunged in March, now up about 6.6% from the beginning of 2020. The company also pays a dividend yield of its own, which sits at 2.5%. AstraZeneca's recession-proof qualities have made it a consistent winner throughout the pandemic -- there's little doubt that it would make a safe addition to a basket of stocks if the market crashes again.