Apple, Berkshire Hathaway, and Tesla are three of the best stocks to buy this month.

Stocks have gotten off to a horrendous start in September. Although the exact reason behind this rocky start to the month isn't altogether clear, it can probably be attributed to a couple of headwinds, such as the uncertainty created by the upcoming presidential election, the lack of movement in Congress on another stimulus bill, the historical weakness of stocks in September in general, along with a healthy dose of profit-taking.

This marketwide pullback isn't all bad news, however. For investors with a long-term outlook, sizable dips in the market can create tremendous buying opportunities. Which top stocks are the best buys right now? Bargain hunters may want to scoop up shares of tech giant Apple (AAPL -1.38%), the diversified holding company Berkshire Hathaway (BRK.A -0.70%) (BRK.B -0.64%), and the electric-car titan Tesla (TSLA -3.21%) this month. Here's why. 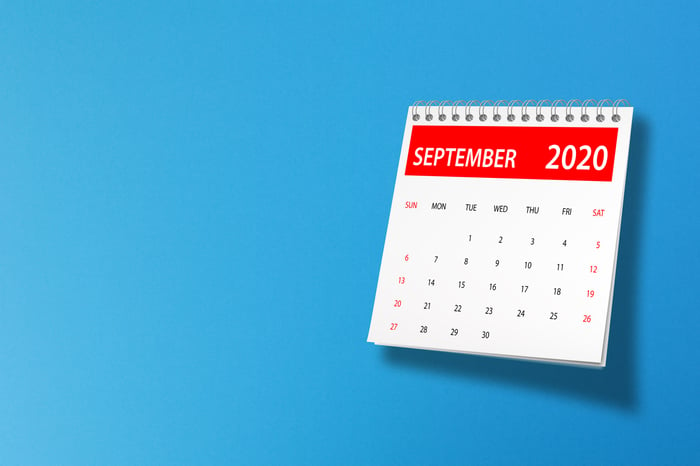 Last Thursday, Apple set an ominous record by losing an eye-popping $180 billion in market capitalization. That's the largest single-day loss for a U.S. listed company ever.

Shareholders have apparently grown wary about the tech giant's historically high valuation following its red-hot growth streak this year. Even after losing almost 8% of its value Thursday, Apple's shares were still trading at almost 32 times forward-looking earnings. That's a hefty multiple under most circumstances, but perhaps doubly so during a steep economic recession.

Why should Apple's stock be on your shopping list this month? Apple's seemingly rich valuation isn't exactly what it appears to be at first glance. The truth is that Apple's suite of products and services such as the iPhone, the iPad, and Apple Music have morphed into consumer staples over the last decade.

What this means is that demand for the tech giant's biggest revenue generators is unlikely to wane -- even in the current economic climate. In fact, Wall Street expects Apple to grow sales by a healthy 12.6% in 2021.

The big picture is that Apple's premium valuation is arguably well deserved. The company has a solid base of extremely loyal customers and it has proven to be one of the most innovative entities in the entire tech space for a long time. Thus, this September swoon should turn out to be a gift for patient investors.

Warren Buffett's diversified holding company Berkshire Hathaway isn't designed to produce market-beating returns during a raging bull market. Rather, the Oracle of Omaha has chosen world-class equities such as Coca-Cola and Johnson & Johnson that tend to not lose money in bad times.

As such, it's not entirely surprising that Berkshire's shares have underperformed the broader markets for the past five straight years; a period characterized by one of the strongest bull markets in history. But it might be high time to circle back to this defensive-oriented equity.

The blunt truth is that the COVID-19 economic recession could evolve into a full-on depression. Companies are still laying off employees at a record pace, the pandemic is showing no signs of cooling off in countries like Brazil and the U.S., and Congress refuses to come together to work out a second relief package. All of these headwinds might result in a prolonged bear market.

If true, Berkshire, with its conservative investing philosophy as its guiding light, should prove to be a safe haven for investors. So, if you're on the hunt for a way to remain invested in stocks but want a low-risk vehicle to do so, Berkshire is arguably your best bet.

Tesla's meteoric rise this year -- fueled by its improving fundamentals and recent stock split -- have ignited speculation that it might be a bubble stock. Tesla, after all, is currently trading at a mind-boggling 131 times forward-looking earnings, at the time of writing, and around nine times its 2021 sales forecast.

To put these financial metrics into perspective, the average price-to-earnings ratio for the automobile manufacturing industry has hovered around eight for the past 14 years. The industry's mean price-to-sales ratio for the current year, by contrast, presently stands at a far more modest figure of three. Tesla's premium valuation, therefore, definitely stands out as an outlier compared to its peer group.

Nevertheless, Tesla still isn't a bubble stock. While the claims of Tesla's frothiness stand true from a classic fundamental analysis, this is a company that defies convention, and should be treated as such by investors.

The bottom line is that Tesla's renewable energy platform has already revolutionized the car manufacturing industry. What's more, it will almost certainly expand into several other unrelated industries over the next decade. So, it's probably a bad idea to value Tesla merely on its near-term outlook.

Why buy this red-hot stock this month? On Sept. 22, Tesla is slated to hold its Battery Day event, where the company is expected to discuss the state of its million-mile battery. This single innovation has the potential to radically change the pricing point for electric vehicles and perhaps pave the way for a revolution in electric aircraft as well.

Long story short, Tesla's stock should get a nice boost from this upcoming investor event later this month.