Federal Realty's portfolio of retail properties got hit hard by COVID-19. Are things starting to turn for the better yet?

Federal Realty Investment Trust (FRT) has increased its dividend annually for more than five decades. Its streak is unmatched by any other real estate investment trust (REIT). But its focus on retail has left it in a weak position in the face of COVID-19. Is the worst over, or is there more pain to come?

Although many foresaw that a global pandemic would happen at some point in the future, few could have imagined what COVID-19 would lead to. Indeed, the call for non-essential businesses around the world to shut down was a massive economic blow. The U.S. landlords that housed such shuttered businesses were equally hard hit, as many tenants with no revenue stopped paying their rent. That included iconic real estate investment trust Federal Realty, which owns a collection of roughly 100 power centers, strip malls, and mixed-use developments.

To put a number on just how bad it got, Federal Realty was only able to collect around 53% of its April rents during that month. Rent collection in May was roughly 54%. June came in at 72%. Federal Realty noted during its second-quarter earnings conference call that it was able to work with tenants to increase its April and May collections through the quarter, ending the three-month span with a 68% collection rate. That's an improvement, but roughly a third of its tenants still didn't pay. That's not a good number, and speaks to the pain being inflicted by the shutdowns in the United States.

In July, collections continued to improve, hitting roughly 75% of rents. But that still means that a quarter of the company's tenants weren't paying. Things are not good for Federal Realty right now -- but there's more to the story.

For starters, Federal Realty is a conservatively managed REIT. In the first quarter it had a funds from operations (FFO) payout ratio of roughly 70%, which is a fairly conservative number in the REIT sector. (FFO is like earnings for an industrial concern.) So there's some room for adversity in that. Moreover, the company is comfortable that it can temporarily use debt to cover the dividend as needed, believing that it can muddle through this weak spot and come out the other side just as strong as it entered it. In fact, in a show of strength, Federal Realty chose to increase the dividend when it announced second-quarter earnings, despite the headwinds it is facing.

What backed that decision is pretty important. For starters, Federal Realty's collection of properties has been carefully selected. It owns highly desirable retail assets in highly desirable locations -- essentially, that means near large and wealthy populations. To put another angle on that, during what management called the most disruptive quarter in its history, it still signed 47 new leases at an average increase of roughly 10% over the rents paid by the previous tenant. Retailers clearly want to be in Federal Realty properties. 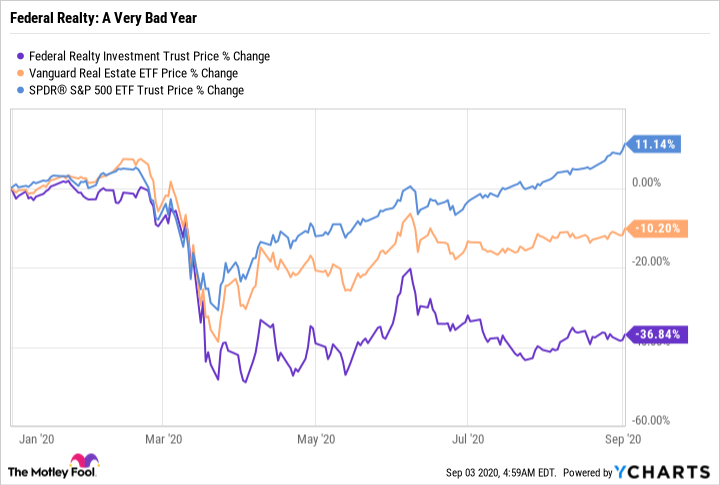 The nature of its centers is also worth considering. Roughly 75% of its properties contain grocery stores, so much of the consumer traffic is necessity-driven and highly regular. In addition, most are open-air facilities, which are viewed as safer than indoor shopping centers like malls. So there's no particular reason for people to avoid Federal Realty properties even though the COVID-19 pandemic has led to social distancing. The real impact on rent collection levels was the government-mandated shut downs, which have largely abated.

Another key distinction for Federal Realty is that it has a long history of construction behind it. That's particularly notable in its mixed-use developments, where it tends to build in phases over many years. On the one hand, that has allowed the REIT to pull back in the face of adversity, generating quick savings. On the other hand, it provides relatively low-cost internal growth prospects for when construction picks back up again.

All in all, Federal Realty appears to be in a good position to weather the current hit and come out the other side ready to get back to work growing its business.

The worst of the COVID-19 hit was probably April and May, and rent collections have improved notably since that two-month span. It would be premature to suggest that Federal Realty's business is back to its pre-coronavirus norm, but it is certainly working its way back, and, according to management, the REIT is pretty confident in its ability to make it through this period with its dividend intact.

If you are a dividend investor, the worst does appear to be behind Federal Realty at this point. And with the stock still down by about a third so far in 2020, it could be a nice addition for more conservative investors. The roughly 5% yield, by the way, is the highest it's been since the Great Recession.