Market measures suffered declines but not nearly as bad as they were at their worst levels of the day.

Friday brought another round of selling to Wall Street, but in the end, things weren't as bad as some had feared. At points earlier in the day, major market benchmarks were down as much as 5%. Yet some brave buyers seemed to come back into the market. That limited losses for the Dow Jones Industrial Average (^DJI -0.25%) and S&P 500 (^GSPC 0.10%) to well under 1%, and even the Nasdaq Composite (^IXIC 0.84%) recovered much of its lost ground by the end of the day.

The retail industry has done pretty poorly during the COVID-19 pandemic, as store closures have forced many companies to retool their operations completely. There have been some winners in the industry, including yoga apparel specialist Lululemon Athletica (LULU 1.54%) and online furniture seller Wayfair (W 2.12%). Yet even those stocks took hits on Friday, as stock analysts questioned whether the two retail winners can keep outpacing their competition.

Shares of Lululemon were down more than 4% on Friday, adding to a more than 5% decline on Thursday. Today's catalyst for the downward move came from analysts at Citi, who became markedly less optimistic about its future prospects. 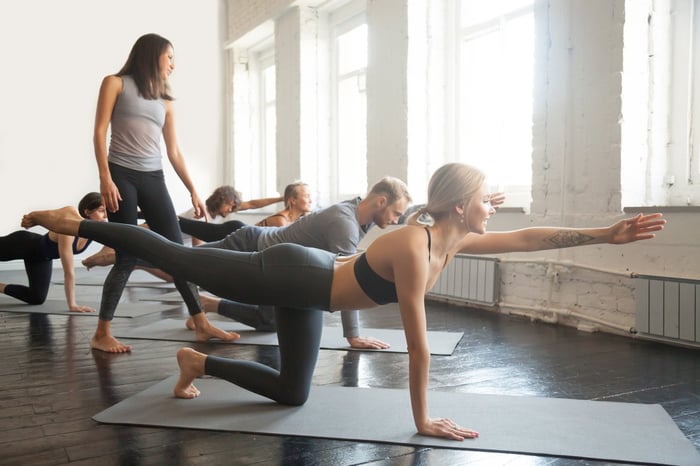 Citi cut its rating on Lululemon from buy to hold. Much of the justification for the move was on valuation, as analysts wondered whether they could realistically expect investors to buy the stock, as its price approached $400 per share recently. At that valuation, potential upside was somewhat limited, but the risks of a downward correction were relatively high.

Lululemon bulls should take heart in the fact that Citigroup remains bullish about the company's fundamental prospects. The yoga retailer has a lot of room for future growth. Analysts seem concerned only that the stock's current price already assumes that Lululemon will execute successfully to capture all that growth.

Lululemon has stood out from the retail crowd for a reason, and some still feel confident about its future. But it's understandable that some feel that the stock is ready for a pause after a run that's nearly tripled its price from its worst levels in March.

Will Wayfair lose its way?

Elsewhere, Wayfair saw its stock drop more than 5%. The online furniture retailer has also done extremely well lately, but analysts question whether the best is now behind the company.

Cautious comments on Wayfair came from Bank of America/Merrill Lynch, where analysts downgraded the stock from buy to neutral. Like Citi analysts commenting about Lululemon, Merrill's analysts were upbeat about Wayfair's fundamental business prospects, celebrating the company's success at figuring out how to do home delivery of furniture and other home furnishings effectively.

Yet one big question facing Wayfair is whether consumers will be able to keep up the pace. Early in the pandemic, those with financial means largely concentrated their shopping online, and that created new opportunities for Wayfair to capture greater market share. However, if a recession takes hold and is more than just a small event, then it could hurt Wayfair's furniture business a lot more than it will affect companies that sell more essential, less discretionary purchases.

The market correction over the past couple of days will make investors more discriminating about the stocks they buy. With shares of Wayfair and Lululemon having soared so high during the bull market, it's possible that the retail companies won't be able to live up to the high expectations shareholders have of them.