Food is a category that was dramatically split during the coronavirus pandemic. Some food-based companies saw outsized growth as people focused on buying essentials, while others saw their sales tank. More than that, COVID-19 is giving investors a chance to see which companies have what it takes to manage despite a challenging environment, whether they gained during the pandemic or not.

Starbucks (NASDAQ:SBUX), PepsiCo (NASDAQ:PEP), and Kroger (NYSE:KR) all showed their strength over the past few months and will come out of the pandemic even stronger. They also score high as ESG (environmental, social, and corporate governance) stocks, a growing trend that is particularly relevant to the food industry.

The coffee superstar was expanding globally, especially in China, and putting technology to work for its business before the pandemic erupted and put an end to its growth efforts. Starbucks posted a 38% sales decline in the third quarter ended June 28, which was a huge drop from the 5% decline in the fiscal second quarter, ended March 29, that only included about two weeks of the U.S. lockdown. That time period did, however, cover several weeks when stores were closed in China, its second-largest but fastest-growing market. 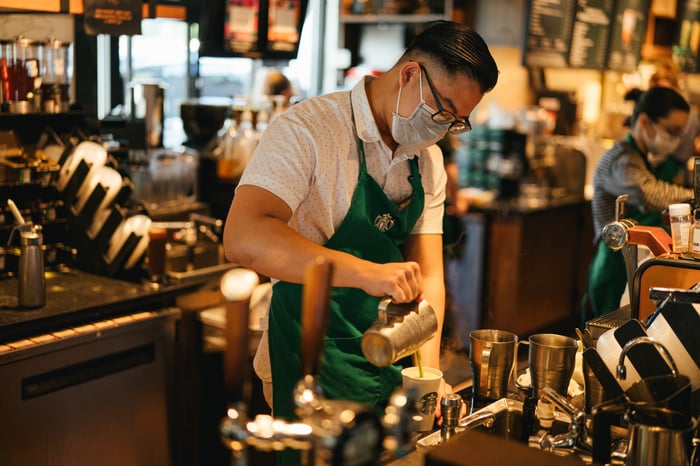 The third-quarter drop was better than expected, thanks to a highly aggressive omnichannel strategy that kept the coffee flowing despite store closures and stay-at-home orders. By the end of the quarter, 96% of stores were operational and seeing sequential improvement. As of the end of July, Starbucks is expecting an improved decline of 10%-15% for the fourth quarter before recovering -- in China by the first quarter of 2021, and in the U.S. by the second quarter.

In the meantime, Starbucks is continuing to push through the technological advances that support its strategies and helped drive whatever sales the company managed to get while stores were closed or dining-in took a break. Most of its digital achievements were already in place before COVID-19 hit, such as mobile order and pay, and drive-thru, and many of them, such as curbside pickup, were fast-tracked into a large number of stores during the pandemic to give customers more options and safer ways to order. These types of actions propelled sales and will continue to drive market share and growth for Starbucks even after the pandemic becomes a memory.

As for ESG, Starbucks has a strong focus on sustainability and social impact. Among other initiatives, it piloted several reusable cup programs this year, and has introduced a variety of plant-based products to its menu.

Starbucks stock has been creeping back up from its March low and is now about flat year to date as investors expect improvement. The price hike boosts the trailing 12-month price to earnings ratio to a steep 78 considering the third-quarter loss, but investors know that the valuation won't remain outsized when the company reverses back to earnings.

PepsiCo outdid rival Coca-Cola (NYSE:KO) during the pandemic as customers stocked up on its snack brand products. PepsiCo has a diversified business with popular brands that made up a lot for the slack in the Pepsi brand's underperformance during the second quarter ended June 13, and helped it beat out Coke, which is solely focused on beverages. 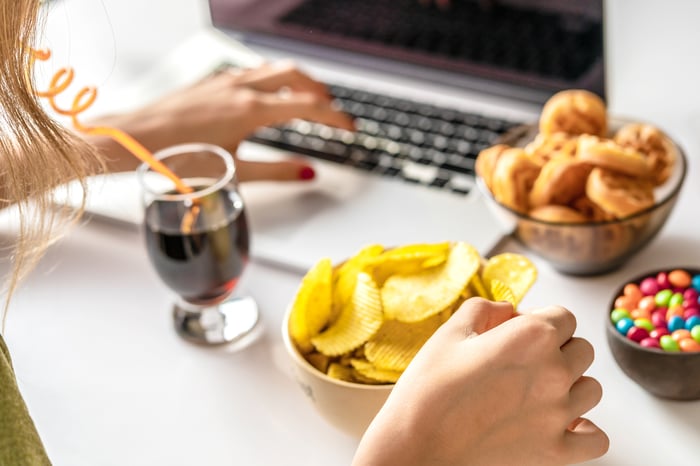 Second-quarter net revenue decreased 3.1%, but organic revenue fell a tiny 0.3%. The saving grace was the company's food division. The Frito-Lay snack segment was up 7%, and the Quaker Oats food segment rose 23%, contributing to $1.18 in earnings per share. The beverage away-from-home channels suffered losses as restaurants, gas stations, and movie theaters were closed and people stayed home, but those channels should pick up again now that people are more mobile, and the third quarter should reflect that. In the meantime, Coca-Cola is making major restructuring changes, but PepsiCo's product line is well-positioned for further success.

To further its ESG goals, the company began a sustainability initiative in 2006 that covers six categories: agriculture, water, packaging, product, climate, and people.

The market seems to be rewarding PepsiCo's stock. The snack and beverage company's shares are up 2% year to date -- wiping out all COVID-related losses -- while Coca Cola is down 7% for the same period. PepsiCo raised its dividend in May, and kept it for the second quarter, and it yields 2.85%, while Coca-Cola's well-loved dividend yields 3.17%. But in the current situation, PepsiCo's overall prospects are looking pretty good. While its not a high-growth stock, PepsiCo is a safe and stable stock whose diversification efforts have paid off, and should continue to provide returns for investors.

Kroger: Catching up to competitors

Kroger operates 2,758 supermarkets in the U.S. under different labels, as well as a smaller fine jewelry segment and pharmacies inside many of its stores. While its main focus is food, its biggest competitor is superstore Walmart (NYSE:WMT), which has 4,753 U.S. locations and owns a large share of the grocery market. 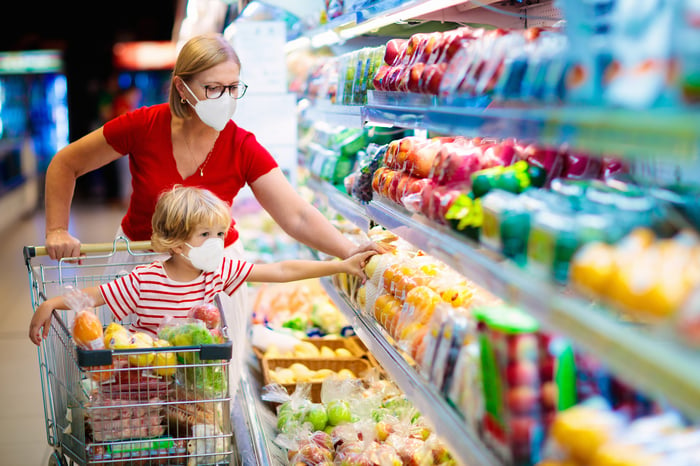 Kroger's been working on developing its omnichannel program to challenge Walmart and Target (NYSE:TGT). It has added more competitive pickup and delivery options and launched a strategy called "Restock Kroger" in 2017 to revamp its brand as well as its digital systems.

The company saw strong results from its investments in the 2019 third quarter, which positioned it for success during the pandemic. In the 2020 first quarter, which ended May 23, comps (without fuel) increased 19% and owned brands grew 21%. Kroger's plant-based meat alternative brand, Simple Truth, grew 32%. The Simple Truth line is part of the company's broad-based sustainability efforts, which has many arms, including responsible sourcing and a focus on renewable energy.

Kroger's goal is to create a seamless ecosystem to deliver "anything, anytime, anywhere" in an effort to better compete with rivals. It now has pickup available at 2,000 locations and delivery at 2,400 locations, reaching 97% of customers. Those developments drove a 92% increase in digital sales in the first quarter. The company is moving forward with new technology such as contactless payments, which it piloted in several locations in August.

Shares of Kroger are up 26% year to date. They're trading at only 14 times trailing 12-month earnings, which suggests that investors haven't been so confident about the company's chances against bigger names in the field. That makes it a great value, and now is great opportunity to buy shares before they rise in price.