Find out what part of the market fell nearly as much.

The latest in volatile moves for the stock market continued on Tuesday, carrying over through the holiday weekend to extend losses. Declines ranged from between 2% to 3% for the Dow Jones Industrial Average (^DJI -1.71%) and the S&P 500 (^GSPC -1.51%) to a more than 4% plunge for the Nasdaq Composite. Investors seemed generally nervous with the pace of the market's rise in recent weeks, especially within the technology sector.

Yet even though tech stocks did get punished on Tuesday, they weren't the only group to suffer big declines. Also falling were energy companies. With the Energy Select Sector SPDR (XLE -0.80%) falling almost 4%, there was a lot happening in the oil market to keep investors on their toes.

Part of the surprise for investors Tuesday was that in general, different parts of the market have moved in different directions lately. When tech falls, other industries tend to rise. When tech bounces, those same industries often give back some of their past gains.

Yet the energy sector had its own worries to deal with on Tuesday. Over the weekend, Saudi Arabia announced that it would cut prices for shipments to refineries in the U.S. and Asia. The move signaled the oil producing nation's intent to get back some of its lost market share. 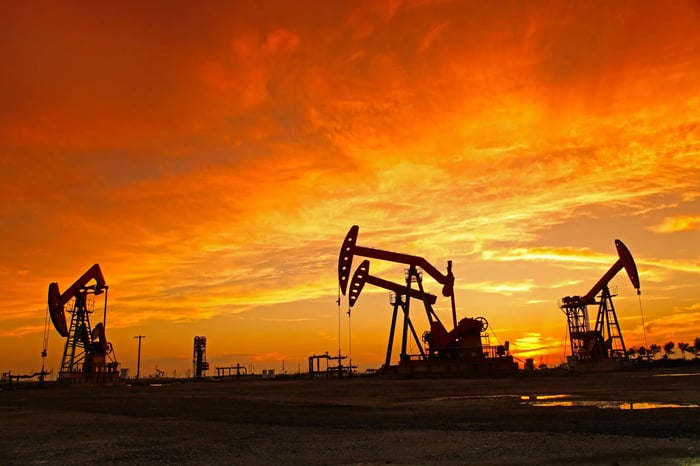 The impact on energy markets was severe. Crude oil fell almost $3 per barrel to drop below the $37 mark. October gasoline futures were down more than $0.07 per gallon to $1.10.

As you'd expect, energy stocks felt the pain. Majors like Chevron (CVX -0.76%) and Royal Dutch Shell (RDS.A) were down almost 4%.

For smaller exploration and production companies, the news was much worse. Apache (APA -2.17%) was down almost 11%, and Diamondback Energy (FANG -0.37%) and Continental Resources (CLR 0.34%) were off nearly 10%. A host of other companies saw similar declines.

Transocean (RIG -0.40%) was one of the biggest losers, dropping 24% and staying just barely above the $1 per share mark. The offshore drilling specialist is particularly sensitive to falling oil prices, as extra costs of working offshore make the economics even more difficult during tough times.

At its core, the problem that the energy markets are having is that supply and demand remain out of balance. Even though many businesses in the U.S. and elsewhere have restarted operations, the appetite for energy products simply hasn't recovered to pre-crisis levels. Meanwhile, cash-hungry producers don't want to cut their activity even if it's necessary to boost prices to sustainable levels.

Unfortunately for energy investors, that dynamic doesn't look likely to change anytime soon. Until it does, more bad news could be in the offing for oil stocks  and the investors who own them.

10 Companies Receiving the Biggest Handouts From the Government

How Dividends Change the Game for Holders of Chevron Stock