It was a big reversal for this top laser and optics company.

Shares of leading laser specialist II-VI (IIVI -2.97%) plunged 12.3% in August, according to data from S&P Global Market Intelligence . That was a big loss compared with the S&P 500's 7% August gain. 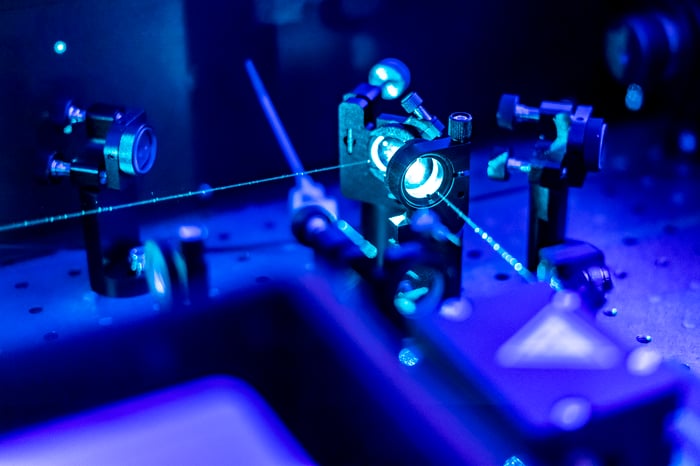 CEO Chuck Mattera was pleased with the quarterly performance. "The power of our vertically integrated and geographically diverse footprint and business model allowed our employees to deliver exceptional results, including record revenues and backlog," he said. "I am very pleased with the Finisar integration which continues ahead of expectations, as we accelerated our component strategy and are on track to exceed our first year synergy cost savings goals."

The market, however, seemed more concerned with the company's guidance, which was for flat or slightly lower revenue. The midpoint of its EPS guidance was also roughly flat. After two quarters of estimate-shattering performance, investors may have been hoping for more.

Lasers and optical components are vital parts of our communications infrastructure and are used in many other industries like defense. However, despite an impending 5G rollout that's expected to benefit II-VI and its peers, the industry's near-term future is in doubt thanks to comments made by one of II-VI's rivals.

When it reported earnings for the June-August 2020 quarter, another laser and optics specialist, Ciena, said that it saw orders fall off a cliff late in the quarter. Ciena's CEO, Gary Smith, predicted that the slowdown would be felt across the industry. II-VI's shares promptly fell about 10%.

Smith's take was at odds with Mattera's assessment that "Demand in the 3D-Sensing and communications market remains strong as the digital transformation continues, led by continued growth of 5G deployment and network infrastructure upgrades." However, it's worth noting that Smith's earnings report came in early September, while Mattera's came in mid-August, and that Ciena's quarter ended two months after II-VI's.

Although II-VI's stock is now trading at about a 29% discount to its 2018 high, its price-to-earnings ratio is near an all-time high. Investors may want to wait to see whether its Q1 report reflects an industry slowdown before buying in.

Why II-VI Stock Dropped 10% This Morning