Please ensure Javascript is enabled for purposes of website accessibility
Log In Help Join The Motley Fool
Free Article Join Over 1 Million Premium Members And Get More In-Depth Stock Guidance and Research
By Rich Duprey - Sep 9, 2020 at 11:00AM

These are the go-to stocks that help fill every consumer's pantry.

Grocery stores ended up out of stock for weeks, and sometimes months, on key consumer staples. Now as supply chains start to normalize, investors can get a sense of where these leading companies are heading and which are good stocks to buy right now. Here are three that should be considered closely. 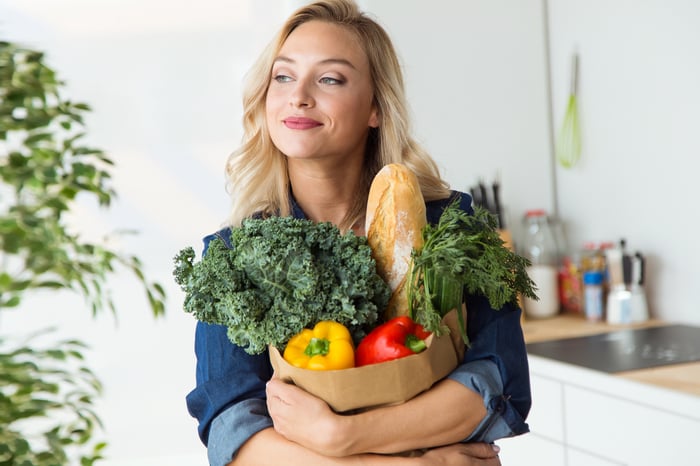 Campbell Soup (CPB 0.30%) might worry some investors. It just reported fiscal fourth-quarter earnings that showed that, although sales jumped 18% for the period to $2.11 billion as consumers loaded up on Goldfish crackers and Prego spaghetti sauce, the soup maker didn't expect the growth trajectory to last.

Guidance for Campbell's fiscal first quarter came in above estimates, but the back half of 2021 is expected to be weak and its stock has dropped 10% in the aftermath. That presents investors with an opportunity.

Campbell Soup is a solidly profitable business, and though it has had to contend with changing consumer trends, it continuously updates its products and recipes to meet them. It divested non-core fresh foods along with its international snacks business, which helped reduce its debt load, and strengthened its core product offerings.

Management also believes that although its growth may slow, the long-term pattern will remain on a rising trajectory as the pandemic introduced new customers to its portfolio of brands. It may not retain all of them, but the water line has been raised and it can continue building up from there.

Clorox (CLX -0.33%) was one of those companies that found itself in the vortex of pandemic hoarding as its disinfecting wipes became the must-have cleaner for a nation looking to prevent spread of COVID-19.

So great was the demand that Clorox still can't catch up, and probably won't until next year. After originally thinking it could catch a breather by the summer, it had to delay till 2021, even as it plans to further expand its third-party contractor network to produce more wipes. No one knows how much further out it may have to push that timeline if the so-called second wave of virus hits as some experts predict.

The company, of course, isn't just a one-hit wonder. It owns some of the top-selling brands in the home care and personal care segments. Clorox generates 80% of its revenue from market-leading products like Pine-Sol, Formula 409, Burt's Bees, and its namesake bleach, and 15% of its sales are generated internationally.

That has made it a stalwart in the homes of consumers and a darling of investors who appreciate that it has raised its dividend every year for more than 50 years. Its stock is not the cheapest because of that, but it has a clear runway for steady future growth dividend payouts.

Dollar General (DG -0.99%) is the leading deep discount retailer that has become an essential destination for consumers looking to stretch their limited financial resources. While the latest data shows unemployment has fallen to 8.4%, that's still a historically high rate and will mean that millions of people need to be very conscious about where they spend their money.

When the Great Recession hit following the financial markets' collapse almost 15 years ago, the dollar stores were primary beneficiaries. Yet what they -- and investors -- discovered afterwards was that all those consumers who went down market to shop didn't leave when conditions improved. They liked the value and price point they found and continued to shop there.

Expect that to happen again with the newest consumers coming to the market during this crisis. Dollar General has invested heavily in providing greater selection, more consumables to encourage repeat visits, and more fresh foods to make the deep discount dollar store a viable option compared to the local supermarket.

Analysts see Dollar General continuing to grow its earnings at double-digit rates over the next five years, and with the stock trading at just 1.5 times its sales, it represents just as good a value as does this dollar store leader's merchandise.