While lululemon athletica (NASDAQ:LULU) and Under Armour (NYSE:UA) (NYSE:UAA) both make athletic apparel, they have been on divergent paths for some time. This is reflected in their share prices. Over the last five years, lululemon's stock has gained well over 500% while Under Armour's share price has fallen by nearly 80%.

Will this trend continue, or are these companies set to experience a reversal of fortunes? 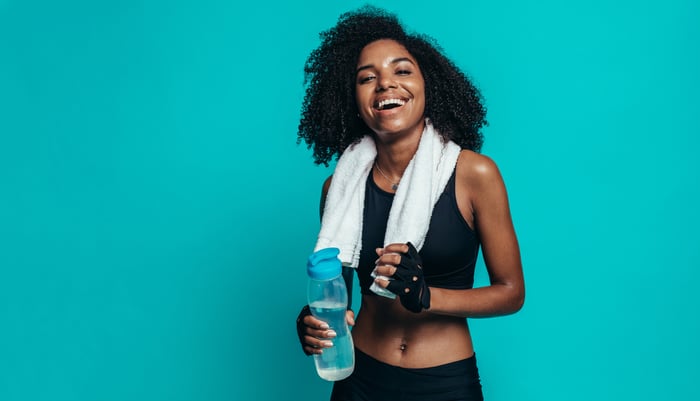 The company sells its namesake athletic apparel and workout accessories via its own retail stores and directly to consumers. Fashionable and practical, lululemon's apparel includes pants, shorts, and tops made for yoga, running, and other exercise, or what management calls "sweaty pursuits."

The company also stays ahead of rivals by introducing new fabrics to its products. Additionally, it seeks to strengthen its line with certain active lifestyle groups, such as those targeted to runners.

The proof is in the numbers. The company's revenue nearly doubled from fiscal 2015's $2.1 billion to $4 billion last year. Even better, lululemon's operating income rose at a quicker pace, from about $369 million to $889 million. The company's year ends in late January/early February.

Naturally, COVID-19 impacted results since lululemon had to close many of its stores. Revenue declined by 17% in its fiscal first quarter (ended May 3), but with the company reopening stores, this should recover. People also found a way to buy lululemon's merchandise, with direct-to-consumer growing from approximately 29% of 2019's total sales to 54% in the first quarter.

Under Armour was once a Wall Street darling, reporting strong revenue growth for several years. Over a five-year period, revenue under U.S. generally accepted accounting principles (GAAP) went from $1.8 billion in 2012 to $4.8 billion in 2016.

The company built this success on its innovative products. Notably, the company started in 1996 with a shirt made from moisture-wicking fabric designed to keep sweat away from the body so that you stay cool and dry. Athletes and those with active lifestyles found this particularly appealing. Under Armour expanded into other apparel that keeps you comfortable based on the temperature -- warm or cool.

Apparel accounts for about two-thirds of the company's revenue, with footwear and accessories representing most of the balance.

This was all going well until competitors, including powerhouse Nike (NYSE:NKE), started offering similar products. Facing stiffer competition, Under Armour's revenue growth slowed dramatically in 2017 to 3% and was just 1% in 2019.

While its second-quarter results were heavily affected by COVID-19, including many retailers shutting down to the public, Under Armour's first-quarter revenue was down 8% after removing the pandemic's effects.

On top of stronger competition and faltering revenue, the company's accounting practices are under investigation. The U.S. Department of Justice and the Securities and Exchange Commission are examining whether Under Armour improperly shifted sales to certain periods to make its results look better.

Of course, this doesn't mean the company has done anything wrong. But it does make it challenging to invest in the stock until the government agencies have completed their work.

Under Armour has faltered amid competition, and has yet to respond effectively. Meanwhile, lululemon has stayed a step ahead by looking to expand and launch new products.