While the dog days of summer may have taken a bite out of some stocks last month, shares of fuel cell-focused companies Ballard Power Systems (NASDAQ:BLDP), Bloom Energy (NYSE:BE), and Plug Power (NASDAQ:PLUG) rose 17%, 29%, and 68%, respectively, in August, according to data from S&P Global Market Intelligence.

It's no surprise that investors turned to fuel cell stocks last month, as global interest in hydrogen has been growing. In July, for example, the European Commission stated its support for adopting hydrogen-based solutions, finding "hydrogen essential to support the EU's commitment to reach carbon neutrality by 2050." And on the U.S. side of the pond, interest in fuel cells has also been heating up in various ways, such as Nikola's progress in working to bring its hydrogen-electric vehicles to market.

While these news items may have spurred some investor interest in Ballard, Bloom Energy, and Plug Power, there were plenty of other specific developments related to the companies that affected investors more significantly. 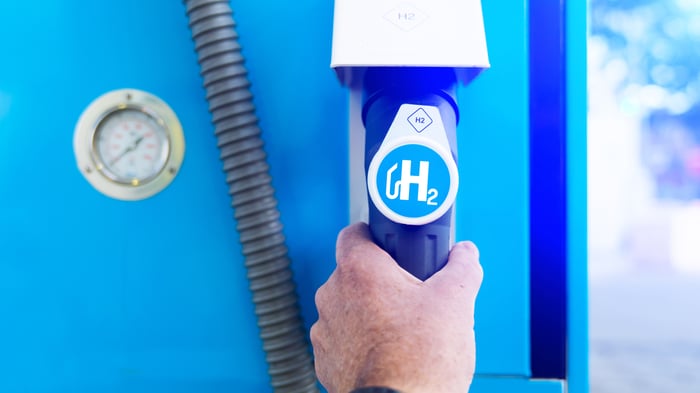 While there were some bright spots -- such as a 9% year-over-year increase in revenue -- in the second-quarter 2020 earnings report that Ballard released in early August, investors were largely uninspired. The company's net loss widened to $11.4 million from $7 million during the same period last year. Operating cash flow also dipped year over year, falling from $1.7 million in Q2 2019 to negative $14.8 million in Q2 2020. Wall Street, however, shrugged off the mixed earnings report and waxed optimistic about the company's future, and investors took notice.

Shortly after Ballard reported Q2 earnings, Robert Brown, an analyst at Lake Street, raised the price target to $20 per share from $13 while maintaining a buy rating on the stock. Recognizing the building of momentum in different markets, Brown was apparently impressed with Ballard's sales pipeline, which has increased about 50% since the end of 2019.

About a week and a half later, TD Securities also espoused a bullish stance on Ballard's stock, raising it to speculative buy from hold and hiking the price target to $20 per share from $14. The most encouraging analyst commentary, though, may have come from Craig Irwin, an analyst at Roth Capital, who set a $25 per share price target based on his belief that China would be soon reinstating its hydrogen fuel cell truck and bus subsidies -- something which he said could be a "material catalyst" for Ballard.

A key insider demonstrates his bullish view on Bloom

Unlike the case with Ballard, investors didn't pick up shares of Bloom Energy last month in response to analysts' upgrades, since there weren't any. Instead, investors bought up shares in the start of the month as a result of momentum that began when the company reported its preliminary Q2 2020 earnings on July 28. Beating analysts' revenue expectations of $171.2 million for the quarter, Bloom Energy reported $187.9 million on the top line. In addition, the company reported an adjusted net loss of $0.23 per share -- better than analysts' expectations of $0.24 per share.

The larger catalyst for investors last month, however, came in the middle of the month when they learned that Jeff Immelt, erstwhile CEO of General Electric, purchased 70,000 shares of Bloom Energy on the open market at an average price of $14.86 per share, representing a total investment of over $1 million. With this acquisition, Immelt has increased his position to a total of 110,058 shares. For investors, Immelt's stock purchase is noteworthy since he currently serves as a member on Bloom Energy's board of directors, suggesting to investors that he may be privy to positive developments that are not public yet.

Plugging into the plethora of points pushing Plug's stock higher

The Plug Power bulls began running early in the month in response to the company's Aug. 3 announcement that itinked an agreement with Asda, a supermarket retailer based in the United Kingdom, to provide hydrogen fuel cell solutions for the retailer's truck fleet -- a noteworthy deal considering Asda maintains a logistics network that includes 30 distribution centers. Following news of the agreement, Amit Dayal, an analyst at H.C. Wainwright, reiterated a $14 price target on the stock and buy rating on the belief that Plug Power's fuel cell solutions are emerging as the "go-to solution" for big box retailers.

Further fodder for the bulls came in the form of the company's Q2 2020 earnings presentation. Plug Power reported a record, $72.4 million, for Q2 gross billings (revenue before the removal of provisions for common stock warrants) in the second quarter, and it reported a narrower year-over-year loss: $8.7 million, compared to $18.1 million in Q2 2019. Perhaps the greater inspiration for investors was management's attempt to allay concerns about the company's future, reaffirming the company's 2020 gross billings guidance of $300 million and its ambitious,upwardly revised 2024 outlook -- revenue of $1.2 billion, operating income of $200 million, and adjusted EBITDA of $250 million.

Lastly, Plug Power's announcement of a new ProGen one-kilowatt fuel cell system for drone applications stirred the market. According to Plug Power, "ProGen hydrogen fuel cells allow devices with electric motors to run cleanly and efficiently. The 1kW ProGen lets Plug Power power everything from electric vehicles to small robotics and UAVs, and everything in between."

Investors may have been eager to gas up on fuel cell stocks in August; however, enthusiasm has waned in September. Shares of Ballard, Bloom, and Plug Power have fallen 13%, 9%, and 7%, respectively, since the start of the month. For three companies that have consistently been unprofitable, the volatility surrounding the stocks is unsurprising. And while I always have an eye out for compelling growth stocks, these three companies are all ones that I'd prefer to watch from a distance for the time being.