Please ensure Javascript is enabled for purposes of website accessibility
Log In Help Join The Motley Fool
Free Article Join Over 1 Million Premium Members And Get More In-Depth Stock Guidance and Research
By Prosper Junior Bakiny - Sep 11, 2020 at 5:40AM

These two pharma giants are unlikely to cut their dividend payments during the next market correction.

Over the past six months, the stock market and overall economy have seemed to be on completely different pages. Despite a high unemployment rate and grim economic outlook, stocks have rallied since March 23, with the S&P 500 gaining more than 40% over this period. The rise doesn't mean that volatility is a thing of the past, however. On Thursday, Sept. 3, the S&P 500 fell by 3.51%, its worst daily performance since Jun. 11. That day alone shows that the market isn't simply destined to go up from here.

Could the stock market dip into bear territory again soon? No one knows for sure, but if it does, panicking is precisely the wrong thing to do. Instead, investors should take the opportunity to buy shares of great companies for a discount. Companies within the pharmaceutical and biotech industries are especially worth considering during a market downturn, because many drug products and medical services can maintain consistent demand throughout the ordeal. These companies may face some headwinds in a recession, but they are likely to emerge in one piece. It is even better if these are great dividend stocks, which can provide a reliable stream of income.

In that spirit, here are two top dividend stocks in the pharma sector you can buy on the dip and hold with confidence when another downturn comes: AbbVie (ABBV 0.37%) and Amgen (AMGN 0.02%). 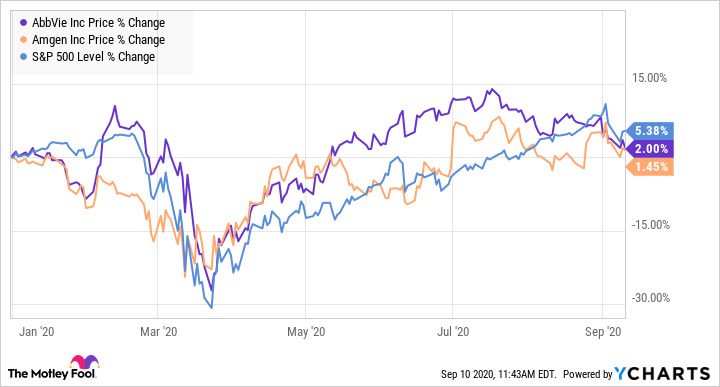 Income-seeking investors want assurance that a company won't suspend its payouts -- even during a recession. AbbVie's long track record of sustained dividend increases presents strong evidence of its ability to weather any economic storm. AbbVie has raised its payouts by 195% since 2013 when it split from parent company Abbott Laboratories. Including the time it spent as a division of Abbott, AbbVie is a Dividend Aristocrat -- it has consecutively raised its dividends for at least 25 years.

Could this stellar record continue? I believe so, and here's why. AbbVie still has what it takes to generate healthy revenue and earnings growth. Sure, the company's blockbuster drug Humira continues to lose steam due to competition from biosimilars. But the rheumatoid arthritis (RA) treatment will remain one of the top-selling products in the world at least through 2024, according to the research firm Evaluate Pharma. What's more, thanks to the AbbVie's May 8 acquisition of Allergan in a cash and stock transaction valued at $63 billion, Humira is now less critical to its overall revenue growth. From the day of the acquisition's closing to the end of AbbVie's second quarter on June 30, Allergan's products had already contributed $2 billion in net revenue.

AbbVie has other products whose sales it can count on too. There is plaque psoriasis treatment Skyrizi, whose revenue during the second quarter was $330 million, more than doubling compared to the prior-year quarter. It also boasts oncological drugs Venclexta and Imbruvica. During the second quarter, the combined revenue from these cancer products was about $1.6 billion, a 25.5% year-over-year increase. 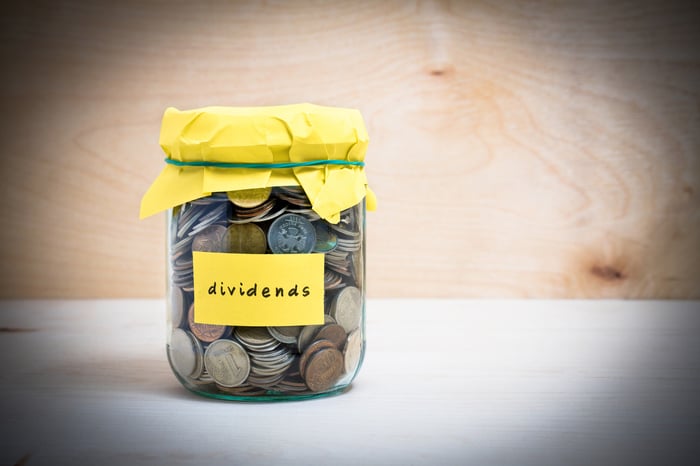 Lastly, there is the crown jewel of AbbVie's acquisition of Allergan: Botox. During the second quarter, revenue from Botox Cosmetic was $226 million, a 43.1% decrease, while revenue from Botox Therapeutics rang in at $297 million, dropping by 22.3% year over year. These declines were due to the impact of stay-at-home orders and social distancing guidelines, which have kept many patients out of doctors offices since the spring. Once the crisis subsides, however, AbbVie expects Botox to rebound, annually generating $1 billion in sales. AbbVie also has over two dozen ongoing clinical trials, which will help the company add new sources of revenue in the future.

AbbVie's current dividend yield is 5.11%, compared to an average of 1.71% for the S&P 500, and the company boasts a conservative cash payout ratio of 47.5%. Further, the company sports an attractive 8.71 forward price to earnings (P/E) ratio. With a strong lineup, solid pipeline, stellar dividend history, juicy yield, and a conservative payout ratio, dividend-seeking investors would do well to buy shares of AbbVie, especially if they become cheaper because of a market crash.

Dividend Aristocrats aren't the only stocks worth considering for income-seeking investors. Amgen may not be part of that exclusive class, but the company is still a solid pick. Amgen has several products that will continue boosting overall revenue growth. Psoriatic arthritis treatment Otezla is one such sales driver, which Amgen acquired from Celgene in November of last year for $13.4 billion in cash.

During the second quarter that ended on June 30, sales of this drug came in at $561 million, compared to the $493 million it recorded during the prior-year quarter. Another drug called Repatha, which is used to treat patients with high levels of cholesterol, earned second quarter sales of $200 million, 32% higher than the second quarter of the previous fiscal year.

Evenity, used to treat osteoporosis, saw sales top $101 million, compared to the $28 million it recorded during the year-ago period. These products (and others) are helping Amgen keep its revenue afloat, given that several of its other important drugs are losing steam. Sales of RA medicine Enbrel dropped by 9% year over year to $1.2 billion due to competitive threats and pricing pressure, while revenue from bone marrow stimulant Neulasta declined by 28% to $593 million due to competition from biosimilars.

Amgen's revenue for the second quarter still increased by 6% year over year to $6.2 billion, despite the impact of the ongoing pandemic. With more than 50 clinical trials underway, including more than 20 phase 3 studies, Amgen's pipeline has the potential to help the company replace the deadweights in its current lineup.

Amgen has raised its dividends by 240.4% since 2013, and currently offers a dividend yield of 2.59%, along with a cash payout ratio of 35.41%, giving the company plenty of room for more dividend increases. And while Amgen isn't as attractively priced as AbbVie -- it currently has a forward P/E ratio of 15.6 -- a market crash would present a great opportunity for income-oriented investors to scoop up shares of this healthcare giant.