Please ensure Javascript is enabled for purposes of website accessibility
Log In Help Join The Motley Fool
Free Article Join Over 1 Million Premium Members And Get More In-Depth Stock Guidance and Research
By Bram Berkowitz - Sep 11, 2020 at 6:18AM

Recently, this regulator approved the first fintech acquisition of a bank and has opened applications for a national payments charter.

Banking is one of the most heavily regulated of all industries. Banks that can store deposits and issue loans must hold a certain amount of regulatory capital, they are subject to anti-money laundering laws, and they need to hold charters and licenses and pass certain tests each year. Banks also typically must answer to at least three different regulators.

But while regulation makes it difficult to run a bank, it also serves as a barrier to entry. Lately, that's been an issue for innovative tech companies that could benefit from becoming a bank.

Recently, Brian Brooks, acting comptroller of the Office of the Comptroller of the Currency (OCC), which regulates national banks, has been paving the way for financial technology companies to clear regulatory hurdles, whether it's obtaining a banking charter or a national payments charter. The moves by Brooks may be seen negatively by banks, who don't need any more competition, or positively by fintechs, many of which are fast-moving start-ups frustrated by the extremely slow and mundane regulatory processes they need to overcome to do business. Either way, it's time for investors to keep an eye on Brooks and the OCC, because it could have implications for their investing strategies. 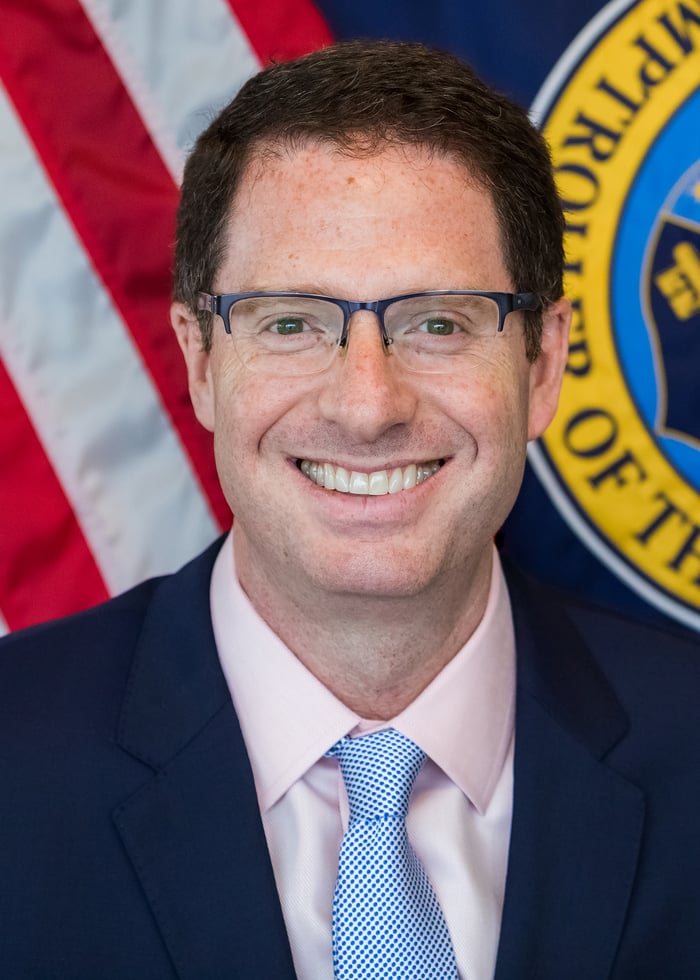 Image source: Office of the Comptroller of the Currency.

Under Brooks' leadership, the OCC has recently begun accepting applications from payment companies that wish to apply for a national charter so they can offer their services all over the country, according to Politico. This has the potential to make life much easier for fintech companies. Many states initially set up their own licensing systems for technology payment companies, but most new fintechs don't want to seek regulatory approval in all 50 states. Through the Conference of State Bank Supervisors, there has been efforts to create multi-state licensing, but the OCC has really wanted to bypass that with a national charter.

Most fintech companies such as PayPal (PYPL 2.01%) currently use traditional banks to act as third parties to facilitate the payment transactions made on their networks. But if they had a national charter from the OCC, they might eventually not need third parties to conduct all of their transactions, as long as they could obtain an account at the Federal Reserve to settle transactions, which is an unknown right now. Still, the headaches that fintechs would save on licensing alone with a national charter would make it very helpful to them.

In another big event that happened recently, the OCC and the Federal Reserve Bank of San Francisco approved the fintech company Jiko's acquisition of Mid Central National Bank in Minnesota. Jiko is a very different kind of bank that invests consumer deposits directly into U.S. treasury bills, allowing them to reap a higher yield. Deposits are not insured by the FDIC, but instead by the Securities Investor Protection Corporation. Jiko will also likely require customers to pay a subscription fee to use its platform.

While the company itself is very interesting, Jiko is the first fintech to officially buy a bank -- a few other fintechs have announced their intent to acquire a fintech, but Jiko is the first to complete the deal. Buying a bank is quickly starting to be seen as the fastest and easiest route to gaining access to a banking charter, but up until now it had never been done.

The online personal lender LendingClub (LC 2.87%) announced in February that it would purchase Radius Bank, but said the transaction would take 12 to 15 months to complete, which is faster than the 18 to 24 months it can normally take to obtain a bank charter. Investors clearly had their doubts, as LendingClub's stock declined significantly the day after the deal was announced, and the stock is down nearly 58% year to date. Still, the LendingClub deal showed the benefits that could be gained from acquiring a bank charter. The company said it could eliminate $25 million in fees to third-party banks and achieve $80 million in additional annual income after the deal is complete. If LendingClub can receive regulatory approval and achieve these goals, that is certainly a compelling reason for more fintechs to acquire banks.

Brooks' decision to press ahead with the national payments charter and the Jiko deal shows that he wants to make it easier for fintechs to do business. Jiko CEO Stephane Litner told Banking Dive that talks to acquire Mid Central National Bank began three years ago. Litner also said talks with regulators began three years ago. I don't know for sure if Brooks was the only guy who would have signed off on this deal -- policy has been moving slowly to open the door for fintechs -- but I certainly wouldn't rule it out.

If Democratic presidential candidate Joe Biden is elected in November, Brooks may be removed as head of the OCC, and the regulatory climate could get more difficult for fintech companies. But if President Donald Trump wins and Brooks remains in the post, it will be easier for the likes of PayPal to get a national payments charter, and perhaps even Amazon (AMZN 2.07%) or Apple (AAPL 2.14%) to as well if they have interest in it.