As the youngest of the pharma juggernauts, AbbVie (NYSE:ABBV) is an exciting company because of its impressive size and lineup of popular pharmaceutical and biological products. Since its spinoff from Abbott Laboratories (NYSE:ABT) in 2013, AbbVie has built an attractive portfolio of drugs while exploring promising programs in oncology, immunology, neuroscience, and more. AbbVie is also attractive to investors thanks to its profitability, consistently growing revenues, and a meaty trailing dividend yield of 5.1%.

But there are two issues which should give potential investors pause. First, AbbVie's $63 billion acquisition of Allergan was finalized in May, but the deal's impact on AbbVie's bottom line is far from clear. Second, there is the key question of how the company will replace flagging revenues from its best-selling drug Humira, which has faced increasing competition from biosimilar products since its patent protections expired in 2016. This question is of immediate concern to the company, as its international revenues from sales of the drug collapsed by 19.9% in the second quarter compared to 2019 on top of more modest declines in 2018.

In my view, the Allergan deal will be instrumental in addressing AbbVie's challenges with Humira. Let's investigate in closer detail how the merger could save AbbVie's day. 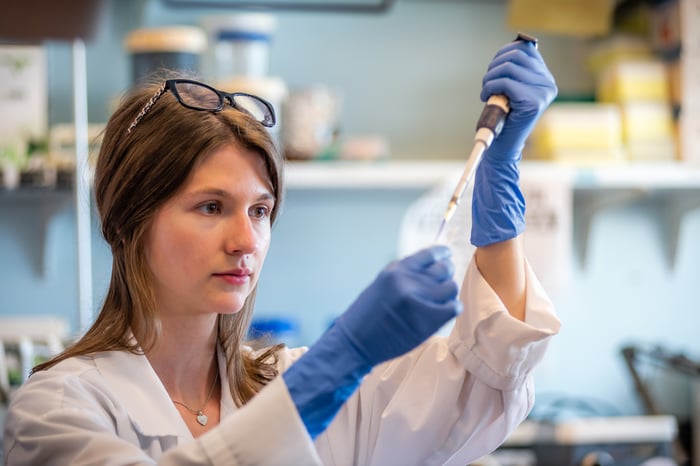 Before being acquired, Allergan produced profitable drugs like Botox as well as eye care and women's health products. AbbVie expects to make a total of $48 billion in total revenue this year, including sales from its new Allergan products. Of this $48 billion, the company expects that sales from its blockbuster biologic, Humira, will account for approximately 40%, which works out to be $19.2 billion, or around $4.8 billion per quarter. This is a drop from Humira's peak sales in 2018, when it brought in just over $19.9 billion over the entire year. Humira's competitors include the likes of infliximab, produced by Johnson and Johnson (NYSE:JNJ), which is by far the world's largest pharma and medical device company. But the real culprit for declining revenues is a bevy of off-patent biosimilars which undercut its price. From 2021 to 2026, Humira's revenues will shrink with a compound annual growth rate (CAGR) of negative 12.5%, according to Market Insight Reports .

How realistic is it for Allergan's sales to make up for Humira's decline? As it turns out, it's quite possible. According to AbbVie's second quarter earnings report, Allergan's portfolio brought in roughly $1.73 billion. This number is deceptively low, however, as the Allergan deal closed on May 8 and the quarter ended on June 30. In other words, Allergan's revenues are only reflected for about half of the quarter. If we double the $1.76 billion to estimate for a full quarter, AbbVie would be earning about $3.52 billion from Allergan.

We'll need to wait for the third quarter earnings report in late October to evaluate Allergan products' revenue contributions over a full quarter. Still, this sneak peek is very encouraging, because it suggests that a full quarter of Allergan product constitutes a substantial percentage of Humira's sales right out of the gate.

Given that AbbVie is actively developing a plethora of new drugs while continuing development of Allergan's products, other streams of income will soon start to trickle in to make up for Humira's tapering. Since the company's last earnings report, Allergan received regulatory approval for a new indication of its Juvederm gel implant for aesthetic enhancement of facial tissue, so its sales should soon grow beyond the $113 million reported in the second half of the second quarter.

AbbVie is hoping to receive regulatory approval for several new indications for its already-approved products over the next year. In particular, AbbVie submitted the regulatory paperwork for three new indications for its arthritis therapeutic, Rinvoq, with the goal of offering the drug to a wider set of arthritis patients. The company is also seeking two approvals for a pair of new therapies created from a combination of its oncology drugs, Imbruvica and Venclexta. One of the regulatory submissions pertains to using the combination for mantle cell lymphoma (MCL) while the other aims to treat chronic lymphocytic leukemia (CLL). Although it might take a few years for these projects to eclipse Humira's present-day revenues, they should help ensure that the company's future is stable . 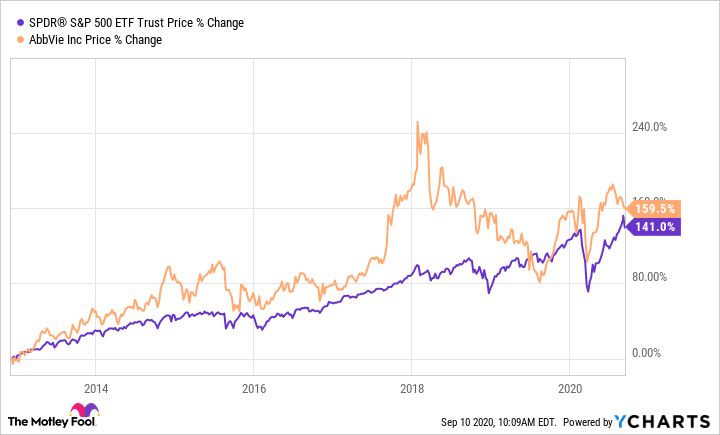 AbbVie is set up for success

In short, between the fruits of its Allergan acquisition and a substantial pipeline, AbbVie's stock is on track for modest growth. I think that AbbVie is worth buying if you're looking for a stalwart pharmaceutical company whose value will slowly appreciate thanks to its intelligently curated and growing sales base. Though there is no guarantee that the company will continue to increase its dividend over time, AbbVie's management has made it a priority so far.

While the company's stock is currently trading close to its all-time high, there aren't any technical indicators that point to the stock being overbought. On the basis of its trailing price to earnings (P/E) ratio of 20.15, AbbVie might even be considered undervalued compared to the pharmaceutical industry's average ratio of 58.18. Unless you're a diehard bargain hunter, now looks like a great time to buy.