Could it become a victim of its own success?

A decade from now, when we look back at what COVID-19 did to the business world, we may well remember it as a "cloud catalyst" more than anything. By that, I mean 10 years' worth of migration to the cloud was squeezed into 10 months. That's what happens when businesses are forced to adopt e-commerce and remote work en masse.

That makes the timing of Snowflake's expected IPO absolutely perfect. With a projected valuation around $22 billion after going public, the company has everything I look for in a stock: the software-as-a-service (SaaS) business model, optionality, a solid balance sheet, and management with skin in the game.

But I'm not buying shares ... yet. Below, I'll cover why Snowflake is so enticing and the one big threat I believe could be lurking right under the surface. 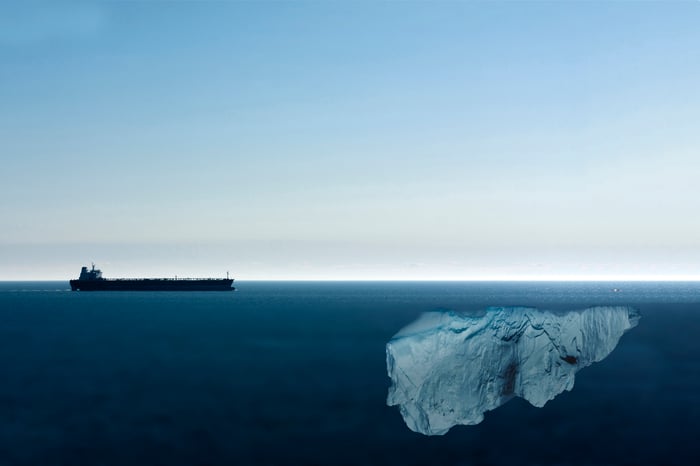 Snowflakes are nice. Hidden icebergs -- not so much. Image source: Getty Images.

I'm not a tech expert, but I understand enough about the dynamics of the cloud to feel comfortable investing in the sector. To get a deeper explanation into what Snowflake does, I encourage you to check out this video with CEO Frank Slootman.

For those who want the cheat sheet, think of it like three pieces of a puzzle fitting together:

Snowflake provides the third piece of the puzzle: The Data Cloud. This pay-as-you-go service provides an architecture for storing data that eliminates data silos. In other words, it makes data far more useful. And because the data can be shared across and between organizations on Snowflake's platform, there are powerful network effects at play as well.

Why Snowflake is getting so much attention

It's not hard to see why investors can't wait to get a slice of Snowflake's stock. Here are some of the headline numbers called out in the company's prospectus -- all accurate as of July 31:

All of those figures are important, but let's focus on those last two in particular. NRR filters out the effect that new customers have on results. It lets us see what happens with the same cohort of customers from year to year, and in this case, an NRR of 158% means that not only did Snowflake sustain the same level of spending from its customers (NRR near 100%), but it got them, on average, to spend 58% more in just two years. When you consider the usage-based model Snowflake has, this makes sense. Data is growing by an order of magnitude, and Snowflake stands to benefit.

Further, RPO represents revenue that's guaranteed under contract but not yet realized. Often, this is because the length of contracts are many months and years into the future, but the fact that RPO has more than tripled means Snowflake has a long pipeline of growth ahead.

We already covered that data sharing allows for powerful network effects, but when customers are using Snowflake this much, they also introduce potentially high switching costs. That double moat is formidable -- and usually a key sign that I should invest.

The one big threat

However, there's a reason Snowflake has been able to grow so fast: It is built on top of the aforementioned infrastructure cloud -- none more so than Amazon's AWS. I can guarantee that AWS is well aware of the brisk growth Snowflake is experiencing. That success could quickly attract competition for the data cloud ... from AWS itself.

Here's how Snowflake puts it in the risk factors section of its prospectus:

Currently, a substantial majority of our business is run on the AWS public cloud. There is risk that [AWS] could use [its] ... control of [its] public cloud to embed innovations or privileged interoperating capabilities in competing products, bundle competing products, provide us unfavorable pricing, leverage its public cloud customer relationships to exclude us from opportunities [...]

Simply put, AWS is in the position of power, not Snowflake. And it wouldn't surprise me if that's exactly what AWS had planned. Amazon already uses its e-commerce marketplace to find third-party products selling like hotcakes, only to then offer a slightly cheaper alternative.  If Amazon were to announce such an initiative, it could damage Snowflake's business and certainly ding the stock's price.

But just because something is possible doesn't mean it will assuredly come to pass. Amazon has tried to create products to beat out the likes of Shopify, only to realize the competition had too much of a head start. That could be the case with Snowflake, and with each passing day, the company's positioning gets that much stronger.

As a long-term investor, though, I'm just fine sitting on the sidelines for now and jumping in when I get more clarity into the situation. It might mean that my returns are less if things work out for Snowflake, but that's a trade I'm willing to make with an 800-pound gorilla like Amazon sitting in the room.