This fast-growing technology company will likely dominate streaming TV over the next decade, yet its valuation trails behind other growth stocks.

It was a tough week for investors, particularly for those with a portfolio heavily invested in tech companies. Highlighting the outsize decline in tech during the week, the tech-heavy Nasdaq fell about 3.6%, while the S&P 500 only declined about 2.5%.

As bad as this sell-off hurts, it seems to have created a few good buying opportunities, with some tech stocks that were already looking attractive became even more compelling. One stock worth taking a good look at -- and possibly buying shares of -- after pulling back this week is streaming-TV platform specialist Roku. 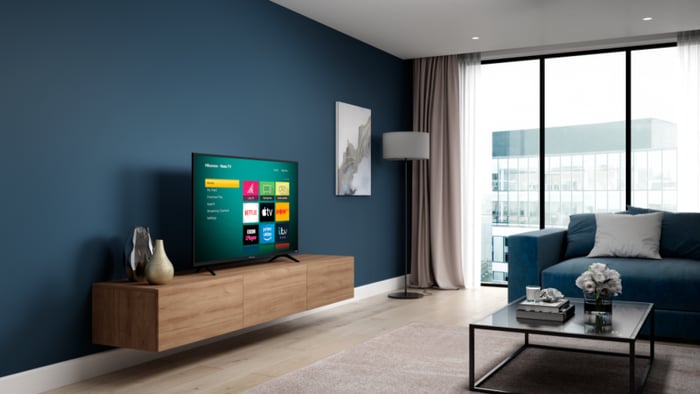 This isn't your average growth stock, as investors will see after looking at the company's top-line momentum and the potential for its strong growth to persist for years to come.

Roku's revenue is soaring, making it a true growth stock, or even a hypergrowth stock. Trailing-12-month revenue grew at a rate of 49% year over year -- enough to pique any growth investor's interest.

As good as this growth rate is, it understates the company's true momentum. Weighing on Roku's top-line figure is its slower-growing hardware business, which has very little to do with what makes Roku so exciting.

Sure, sales of its over-the-top streaming devices are key to the company's business, as is revenue from its licensing agreements with smart TV manufacturers that power their devices with the Roku operating system. These sales help the company acquire new active users.

But the real long-term opportunity for Roku is monetizing its growing user base on its platform, which consists of revenue from transactions, subscriptions, and advertising served on its operating system. This platform revenue, which accounts for more than 70% of the company's total revenue, was growing at a rate of greater than 70% year over year until it hit a (likely temporary) setback due to the coronavirus. Platform revenue growth slowed to a still-impressive year-over-year rate of 46% in the second quarter.

Roku will likely see consistent 50%-plus year-over-year growth in its platform revenue in late 2020 and in 2021. Once advertisers recalibrate their campaigns and start advertising again as the economy reopens, they'll likely turn aggressively to streaming TV ads, which already represent the fastest-growing advertising channel.

Looking further out, how can Roku's high growth rate persist? Even long-term momentum will likely be fueled by the tipping point of ad dollars coming from traditional television to connected TV (CTV), where Roku is a market leader. Of the approximately $70 billion spent annually on television advertising in the U.S., only about $7 billion is spent on CTV. As cord-cutting continues and as TV watchers keep shifting their attention away from traditional TV and toward CTV, Roku is better positioned than its rivals to benefit. The company dominates the streaming-TV platform market in the U.S. Indeed, nearly half of U.S.-based CTV users in 2020 will be Roku users, eMarketer estimates.

All of this growth sounds great, particularly given that the streaming-TV ad market is just getting started. But what about Roku's valuation?

With a $19 billion market capitalization and no profits, Roku stock may seem overvalued on the surface. However, given the durability of Roku's current growth drivers and the inherent scalability of a platform-based business model, future annual profits could be substantial.

For instance, assuming Roku can grow revenue at an average annualized rate of 30% over the next 10 years, the company would generate nearly $3 billion of net income on an estimated 15% net margin (a reasonable forecast for a mature, scalable tech company). Further, if Roku can command a price-to-earnings multiple of 35 on those earnings, Roku's market capitalization would likely be greater than $100 billion 10 years from now, up from less than $20 billion today.

It's also worth pointing out that Roku's price-to-sales ratio is quite attractive when held up against its recent revenue growth. To illustrate, compare it to other market-leading tech platforms.

The only company with a lower price-to-sales ratio is Netflix. But the streaming-TV media giant is growing much more slowly than Roku. Unsurprisingly, therefore, the difference in the two companies' price-to-sales valuations narrows significantly when you are using next year's sales estimates. Roku and Netflix are currently trading at 9 and 7 times average analyst forecasts for their 2021 revenue estimates, respectively.

Roku's torrid business momentum, its huge opportunity for further growth, and its conservative valuation make the stock worth considering today. Sure, there's always a risk that the company's growth decelerates more than expected -- particularly if competition heats up. In addition, investors should prepare for the wild volatility that comes with owning growth stocks. Overall, however, Roku seems like a great long-term investment opportunity.