Sometimes it takes years for an opportunity to pan out, but it's often worth the wait.

If you're in your 20s, you can afford to do things differently than investors twice your age. Namely, you can afford to be patient and let good stories develop into good investments. Investors now in their 50s or 60s don't have that luxury of time. They have to start making retirement budget plans right now, which means they have to pin down a portfolio's plausible value in the very near future.

With that as the backdrop, a trio of publicly traded companies is worthy of the typical 20-something's watchlist. They may not be overwhelmingly popular picks right now, but they've got the potential to pay off in a big way if young investors can simply sit tight -- for a few decades. Let's take a closer look at three companies investors in their 20s might want to put on their stock-buying lists. 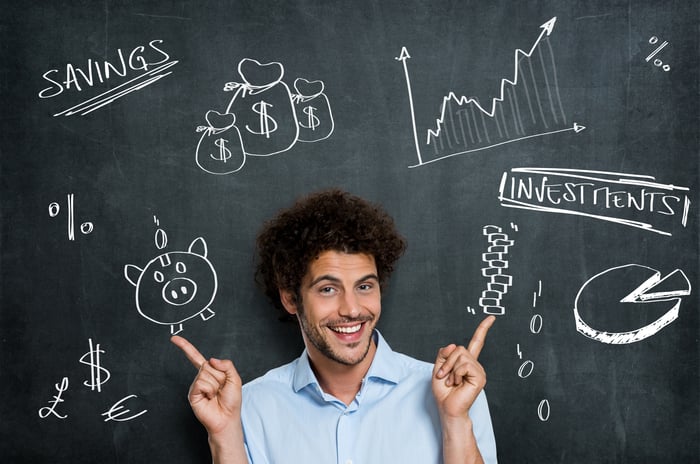 It's possible you've been affected by Digital Turbine (APPS 8.58%) without even realizing it. The company helps app developers and consumer technology hardware manufacturers sell more digital goods to consumers. For instance, Digital Turbine offers a way for developers to feature their particular apps at the time a new device is being set up for the first time. It also facilitates ongoing display advertising on those devices.

Partners range from Samsung to AT&T's advertising unit Xandr to The Trade Desk, which is another advertising technology player of a slightly different breed.

It's not exactly a new concept. But it's an opportunity that's been ineffectively exploited until now. Having figured out a way to do it better, Digital Turbine's sales growth is projected to reach 76% this year despite the coronavirus headwind.

Next year's projected revenue growth of nearly 19% isn't quite as impressive. Analysts may be underestimating what lies ahead, though, for the same reason investors might worry there's not a huge future here -- the smartphone market just might be reaching its saturation point. But it's a worry that isn't quite merited for a handful of different reasons.

One of them is the fact that of the nearly 8 billion people who populate the planet, fewer than half are smartphone users. The remainder will gain access to these mobile internet devices in time, but it could be a long time. That offers Digital Turbine a long growth runway. Yet another reason not to worry: Apps aren't just for smartphones anymore. Smart TVs are still a young product category, and the company has a solution for that market as well. Perhaps more than anything, though, Digital Turbine could be a growth opportunity simply because easy-to-use-technologies are becoming the centerpieces of how we live our lives.

Aegion (AEGN) isn't a household name, and with a market cap of only around half a billion dollars, that's not apt to change anytime soon. It's still a name that investors would be wise to put and keep on their radars, though, as this infrastructure outfit addresses a huge but largely ignored problem the U.S. and the world now face. That is, our water utility systems are crumbling, figuratively and literally.

In its most recent assessment, the American Society of Civil Engineers' Committee on America's Infrastructure gave the country's overall water delivery system a grade of D, noting the United States' 240,000 "main" water breaks suffered every year that cause the annual waste of 2 trillion gallons of potable water. The estimated cost to fix it? Over $100 billion more than has been budgeted.

Enter Aegion, which offers a cost-effective and relatively quick solution for those never-ending water main breaks. Its core competencies are corrosion-resistant pipes and pipeline rehabilitation for the energy sector and -- you guessed it -- water utilities.

Its flagship product is called Insituform, which is a flexible polyester resin tube that can be inserted into an existing concrete water conduit, then inflated and cured in place using steam or hot water. This cured-in-place pipe, or CIPP, effectively turns an aging water main into a new one from within, without requiring digging up old ones and dropping in new ones. They're even better than the ones they're rehabilitating, as the smooth polyester lining is less prone to buildup and temperature-related cracking.

The political and financial will to update the country's water systems can be shaky at times. A few more debacles like the one in Flint, Michigan, however, should serve as evidence that our water scarcity challenge can't be ignored.

Finally, 20-something investors will want to keep tabs on Republic Services (RSG -1.41%). Yes, I'm referring to the trash collection company, although it's far from being "just" a waste-disposal anymore. Arguably more so than any of its peers, Republic Services is serious about recycling and doing something constructive with the trash that can't be recycled.

One such initiative is its stand-alone recycling service offered to commercial customers. It also operates several dedicated materials recovery facilities, which monetizes much of the garbage we're glad to get rid of. How much material it's able to recycle varies from one market to another, but Republic Services notes that in some West Coast markets it's able to divert as much as 70% of the waste it collects toward its recycling operations. In the meantime, the company collects methane gas from landfills that is used in a variety of ways, from generating electricity for homes to powering the trucks that haul away your trash. It's an increasingly important aspect of the waste-disposal business, and will only grow as the planet continues to warm and more people start to take renewable energy more seriously.

The other reason Republic Services may be an underrated long-term opportunity is much more straightforward -- we're running out of room to dump trash, and that problem is only exacerbated by the fact that populations continue to grow (inside and outside of the United States). A 2018 report from the Northeast Resource Recovery Association suggested that as soon as 2036, the country's existing landfills would be completely full. This trend will ultimately put a premium on land needed for new landfills, and simultaneously turn large and efficient waste-disposal outfits into well-paid problem solvers.

It's anything but a sexy investment. But it's a top name in an industry that's never going to go away.