The company sees a positive 2021, including launch of an RV rental marketplace.

Camping World Holdings, Inc. (CWH 0.66%) ended the day's trading with its shares up nearly 5% after a press release described its new 2021 outlook and goals. Two highlights of the recreational vehicle (RV) and camping supply company's projections include plans to boost revenue per member by 10% over the next 36 months, and the expectation that adjusted earnings before interest, taxes, depreciation, and amortization (EBITDA) will rise from $460 million to $490 million during 2020 to $500 million in 2021.

The company says it is working on business improvements on multiple fronts, including R&D investment in efforts to "create more efficient, more responsible, light weight, innovative and tech-savvy" recreational vehicles and accessories. The eco-friendly RVing trend has continued to gather strength for at least a decade, while according to MarketWatch, COVID-19 could help drive RV sales to an 8.6% compound annual growth rate (CAGR) through 2025. Camping World's push to develop new, "greener" RVs could potentially mesh profitably with both these trends. 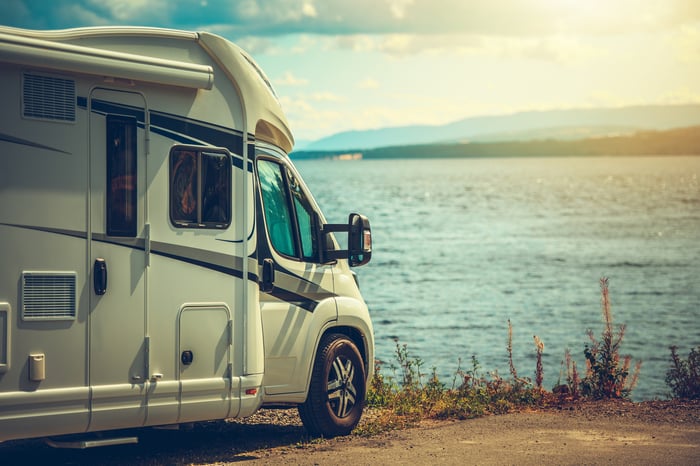 Spring 2021 will also see the launch of a Camping World RV rental marketplace, usable by its "Good Sam" members, who number approximately 2.1 million people, according to the company. The marketplace will occupy on a peer-to-peer basis. Camping World says it thinks easily accessible rentals will create more interest in its RVs, presumably by allowing potential buyers to rent an RV and try out the concept before making a purchase.

Camping World has already seen its stock soar this year, including 10% same-day gains last week after receiving an "Overweight" rating from a JPMorgan analyst. While its shares historically climbed higher in late 2017 and early 2018, the RV company's stock value broke upward strongly in mid-July and still occupies a range that's the highest for the past 12 months.