Shares of Beyond Meat (NASDAQ:BYND) climbed Monday after the company unveiled its new meatless "meatballs." They'll be appearing in retail outlets nationwide beginning this week. As of 2:30 p.m. EDT, the stock was up by 6.6%.

Beyond Meatballs derive their protein from peas and brown rice. They contain no ingredients from genetically modified organisms (GMOs),  nor anything that was treated with antibiotics or hormones. The company also says they have no cholesterol, and contain 30% less saturated fat and sodium than the leading brand of animal-based Italian-style meatballs -- all of which should resonate with health-conscious consumers. 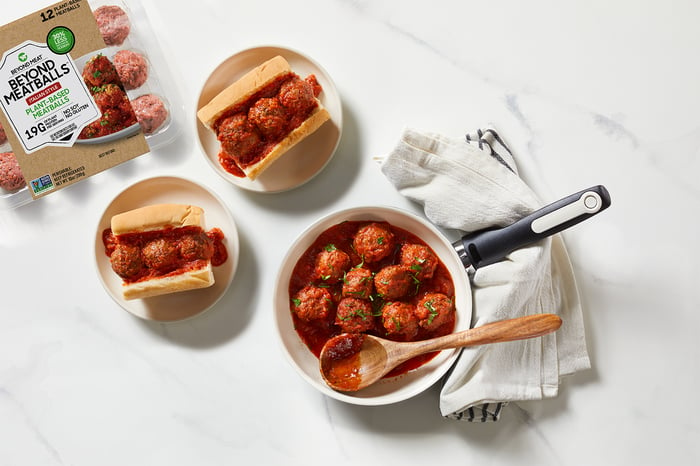 Beyond Meat's stock rose sharply on Monday after it unveiled its new Beyond Meatballs. Image source: Beyond Meat.

The product will sell for a retail price of $6.99 for 12 meatballs. They'll be available in major grocers such as Kroger and Whole Foods by early October.

"We're thrilled to introduce Beyond Meatballs as they deliver on consumers' growing demand for delicious and nutritious plant-based meat options without GMOs or synthetic ingredients," Chief Marketing Officer Stuart Kronauge said in a press release.

This marks Beyond Meat's third major product launch in 2020, following the debuts of its Beyond Breakfast Sausage and Cookout Classic value packs. It comes as the company is already working to meet soaring demand for meat alternatives. Demand for refrigerated plant-based meatballs has been particularly robust; market research company IRI pegs the segment's growth at 145% for the 12-month period that ended Aug. 9.

In addition to broadening its product lineup, Beyond Meat has also been strengthening its distribution network. Its offerings are now available in more than 26,000 retail stores, and it launched a new direct-to-consumer e-commerce site in August.

These efforts are bearing fruit. Beyond Meat's revenue surged 69% year over year to $113 million in the second quarter.