Heavy machinery manufacturer Caterpillar is not seeing much of a sales recovery as the COVID-19 pandemic drags on. The company reported on Tuesday that rolling-three-month retail sales tumbled 20% globally in August, matching July's decline.

The Asia Pacific region saw sales drop just 1% in August, down from an increase of 5% in July. North America was once again the weakest region for Caterpillar, with sales tumbling 35%. That's marginally better than a 38% decline in July.

Rolling retail sales in the resource industries segment dropped 27% in August, worse than the 19% decline in July. Sales were down 17% for the construction industries segment, better than July's 20% decline. By industry, retail sales to industrial customers tumbled 42%, and sales to oil and gas customers dropped 30%. Power generation was a bright spot, with sales up 14%.

Shares of Caterpillar were down 2.8% by early Tuesday afternoon. The stock is still up slightly since the start of the year. 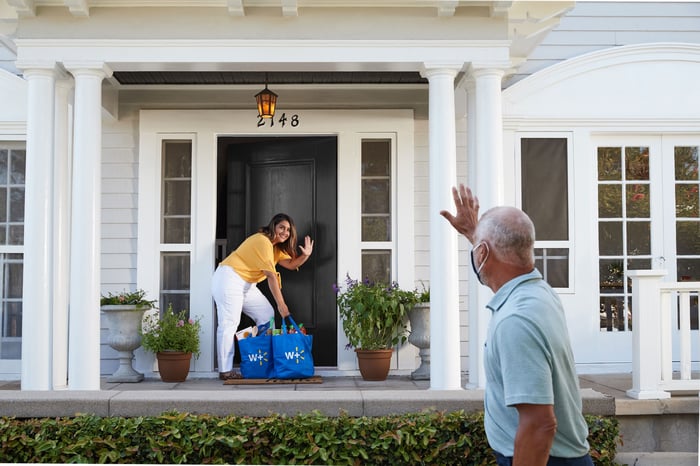 Mega-retailer Walmart officially launched its Walmart+ subscription service nationwide on Tuesday. A 15-day free trial period will allow shoppers to try out the service, and they'll pay either $12.95 monthly or $98 annually once the trial is over.

The core feature of Walmart+ is free same-day delivery. The service won't come anywhere close to matching Amazon Prime on selection -- Walmart says over 160,000 items will be available, but those items include groceries as well as general merchandise. Fast grocery delivery is the main draw, and it allows Walmart to lean on its thousands of U.S. stores to get products to customers quickly.

With the pandemic leading many people to opt for grocery pickup or delivery, Walmart+ looks like an appealing service. The company may be able to steal away customers from other grocery chains, although it's unlikely many people will drop Amazon Prime. Shares of Walmart were up about 0.3% by early Tuesday afternoon.

Microsoft's new Xbox game consoles launch in November. Those consoles will be available under a subscription program called Xbox All Access, which bundles the hardware with Xbox Game Pass Ultimate.

Xbox Game Pass Ultimate is Microsoft's game subscription service, offering access to more than 100 games for Xbox and PC. On Tuesday, Microsoft announced that Game Pass Ultimate was gaining cloud gaming capabilities on Android devices. More than 150 games will be playable on Android phones and tablets, allowing even those who don't own an Xbox to play Xbox titles.

Cloud game streaming could help Microsoft bring more people into its gaming ecosystem, even those who will never buy a game console. Shares of the tech giant were up about 1.7% by early Tuesday afternoon.