Please ensure Javascript is enabled for purposes of website accessibility
Log In Help Join The Motley Fool
Free Article Join Over 1 Million Premium Members And Get More In-Depth Stock Guidance and Research
By Evan Niu, CFA – Sep 15, 2020 at 10:30AM

Big Red is scooping up Tracfone and moving downmarket.

Just a few months after T-Mobile (TMUS -0.35%) closed its acquisition of Sprint to become a more formidable competitor to AT&T and Verizon (VZ -1.73%), Verizon announced on Monday that it is acquiring Tracfone from America Movil (AMX -3.06%). Tracfone is the largest mobile virtual network operator (MVNO) in the U.S. and its subscriber base is heavily skewed toward prepaid customers, helping to diversify Verizon's customer base, which has always predominantly consisted of postpaid subscribers.

The move will bolster Verizon's competitiveness in that market segment against T-Mobile, which dominates the prepaid business. 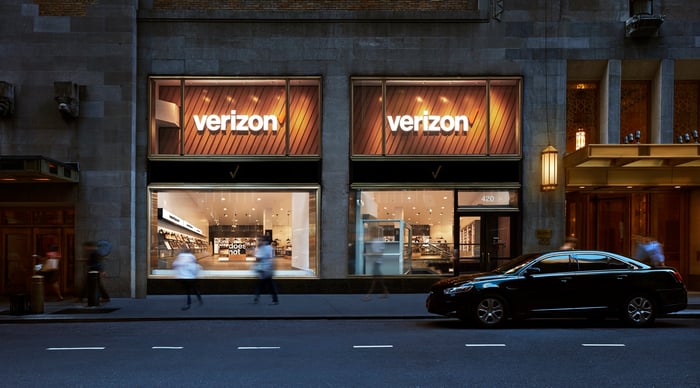 Verizon's retail footprint is about to get bigger. Image source: Verizon.

For reference, here's the composition of each telecommunications company's subscriber base at the end of the second quarter, excluding wholesale customers.

As an MVNO, Tracfone uses the networks of national carriers, reselling the service under its own brands like Straight Talk. The reseller had 20.9 million wireless subscribers at the end of the second quarter, of which 9.7 million were Straight Talk customers. Tracfone has a little over 2 million subscribers under its SafeLink brand, which participates in the U.S. government's LifeLine program that subsidizes cellular service for low-income consumers. The FCC last year accused Sprint of improperly collecting subsidies for unused lines through that program.

Verizon has long been one of Tracfone's network partners, and Big Red says it currently already serves approximately 13 million of Tracfone's subscribers through its network. Tracfone also operates over 90,000 retail locations in the U.S., so the deal will expand Verizon's retail footprint.

The transaction is structured with $3.125 billion in cash and an equal amount in stock, with an additional $650 million potential earn-out if Tracfone can hit certain performance targets. That puts the total price tag as high as $6.9 billion. Verizon expects the acquisition to close in the second half of 2021 and proceed to be accretive to earnings in the first full year after closing (when excluding transaction and integration expenses), all while not impacting capital expenditures.

"We are excited about the opportunity to bring Tracfone and its brands into the Verizon family where we can put the full support of Verizon behind this business and provide exciting and compelling products into this attractive segment of the market," Verizon CEO Hans Vestberg said in a statement.

Verizon has historically focused on higher-income consumers, often pricing its wireless plans higher than the competition and primarily wooing postpaid subscribers. In acquiring Tracfone, Verizon sees a shortcut, albeit an expensive one, to bolstering its prepaid business while offering more services to lower-income demographics.