Interested in marijuana stocks? Here are two popular players to put on your watchlist.

Although marijuana was legalized nationwide in Canada in October 2018, Canadian cannabis companies have yet to reap the potential benefits of the newly licit market. Lagging profitability is partly due to companies' initial overestimates of consumer demand for marijuana. Many entities now find themselves with millions of capital invested in lavish hemp production facilities, only to be met with low sales numbers. As a result, facility closures and inventory write-offs have forced many businesses to endure consistent and devastating blows to their profitability.

The sector is definitely taking a lot of heat, but the subsequent stock market sell-off has created new opportunities for investors to buy value stocks at a discount and growth stocks at a reasonable price. After all, the legal cannabis market in Canada is valued at CA$2.4 billion this year, and household spending on legal marijuana overtook household spending on illicit marijuana for the first time ever. A few companies are especially well-poised to capitalize from the uptick in demand, demonstrated by the nation's year-over-year overall sales increase of 75% in Q2 2020.

That's not all. While the Canadian marijuana market has seen its share of woes, cannabis companies across the U.S. are jumping onto the bandwagon in anticipation of federal legalization in the states. Let's take a look at two marijuana stocks you should add to your watchlist in September that are based in U.S. and Canada. 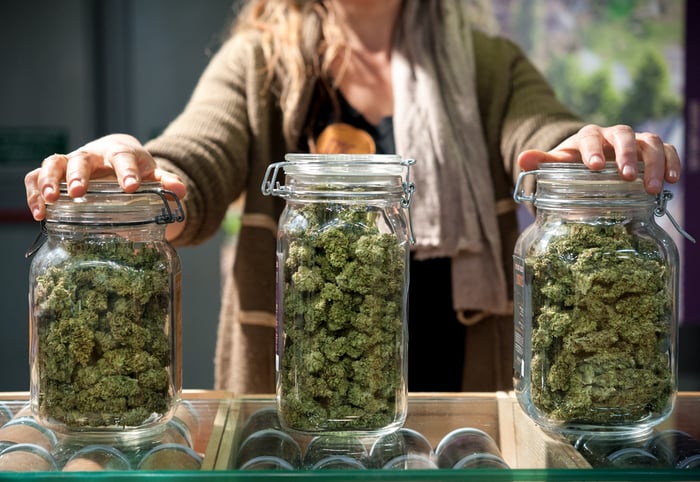 Once a giant in the cannabis industry, Aurora Cannabis (ACB -4.76%) has fallen on hard times after acquiring its competitors, such as MedReleaf, at inflated prices to boost its production volume. The company must now pay for its mistakes by recording multi-billion dollar non-cash losses in goodwill and intangibles from oversupply.

Back in June, Aurora closed down five of its smaller production facilities and laid off more than 700 employees, accounting for 25% to 30% of its overall staff. The closures were largely due to excess inventory and demand being much lower than predicted. Recently, the company announced it would write down about CA$1.8 billion in goodwill and intangible assets. Adding insult to injury, the company is already posting an operating loss before this writedown.

If the bad news sounds too overwhelming, potential investors can rest assured knowing that it is mostly reflected in the stock price. Currently, the company's market cap stands at just $815 million, and may be ready for a turnaround.

The company will be hosting its fourth-quarter 2020 conference call on Sept. 22; it has already announced preliminary revenue figures of between CA$70 million to CA$72 million, a small sequential decrease from the $75.5 million it generated in Q3 2020.

Meanwhile, the company is taking dramatic measures to reduce its cash loss. Within two quarters, Aurora has reduced its selling, general, and administrative (SG&A) expenses from more than CA$100 million to about CA$62.5 million. The company has also suggested it will reduce its SG&A spending to CA$40 million per quarter by the first quarter of 2021. By the second quarter of 2021, Aurora expects it can generate positive earnings before interest, taxes, depreciation, and amortization (EBITDA).

With the stock price this low, any amount of good news could reverse the sell-off. Investors should keep an eye out for Aurora's earnings release in the coming weeks and consider the company's long-term potential within a growing legal Canadian market.

Green Thumb Industries (GTBIF -0.44%) has decisively avoided the woes in the Canadian marijuana industry because its operations are located in the U.S., where entities have been more conservative in their supply and demand projections. The company runs 48 retail stores in 10 states selling medical cannabis, CBD, and recreational marijuana, with nine new stores having opened year-to-date.

In its quarter ended June 30, Green Thumb's revenue grew by a stunning 167.5%, up from $119.6 million in last year's quarter. The company's operations became more efficient as it grew its gross margins from the prior quarter's 51.6% to 53.6%. Green Thumb's adjusted EBITDA margin is now 29.6%, with EBITDA ringing in at $35.4 million.

The company is closer to reaching profitability, having lost just $0.06 per share in the past quarter. Meanwhile, Green Thumb has ample capital on its balance sheet to cushion any unexpected business risks, including $152.6 million in cash to offset its $95.2 million in debt.

At a market cap of $2.82 billion and a forward price-to-sales (P/S) ratio of 7.6, the stock is not as cheap as Aurora, with a ratio of about 2.5. In context, however, 5.6 times price-to-sales is still a discounted price for a company that's more than doubling its revenue year over year. With negligible exposure to the Canadian marijuana sector, substantial growth in the U.S. market, and a great valuation, this is an outstanding cannabis stock for new and seasoned pot stock pickers.