These stocks have what you want during turbulent times: solid business models, stable cash flows, and reliable dividends.

Some might feel like cashing out of stocks completely. History has shown that retreating is typically a big mistake. A better strategy is to invest in stocks that are built for the long run and even pay you to wait during turbulent times. Here are three steady stocks that you can buy right now in a highly volatile market. 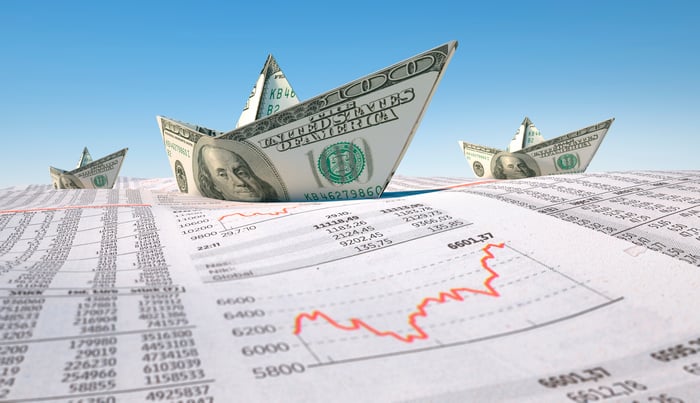 Brookfield Infrastructure's assets keep revenue flowing in regardless of what's going on in the world. Roughly 95% of the company's adjusted earnings before interest, taxes, depreciation, and amortization (EBITDA) is either regulated or locked in with long-term contracts. This gives Brookfield Infrastructure very stable cash flows.

Investors have this stability to thank for Brookfield Infrastructure's dependably juicy distribution payments (the equivalent of dividends). The company expects to grow its cash flow consistently by between 6% and 9% annually, which means those distributions will likely increase in the future.

To be sure, Brookfield Infrastructure wasn't immune to the big stock market sell-off earlier this year; its shares lost around half their value at one point. However, that was clearly a major overreaction by investors. The stock has since bounced back strongly. Most importantly, Brookfield Infrastructure's business hasn't skipped a beat, and its management is increasingly optimistic about the company's future prospects.

Another member of the Brookfield family also offers tremendous stability for investors. Brookfield Renewable (BEP -0.68%) (BEPC -0.61%) ranks as one of the world's leading renewable energy companies, with over 5,300 power generation facilities on four continents.

Like its sibling Brookfield Infrastructure, Brookfield Renewable generates steady cash flows. That's because most of its power generation is contracted -- 91% for the rest of this year. Brookfield Renewable told investors in 2019 that it's "one of the few future-proof stocks." With the demand for renewable energy increasing, that statement isn't just hype.

Brookfield Renewable stock plunged in the market meltdown in the first quarter of 2020. However, that presented an excellent buying opportunity for long-term investors. Even if stock market volatility rises in the coming months, Brookfield Renewable will continue to be a great long-term pick.

No, not all of our steady stocks to buy are named Brookfield. Johnson & Johnson (JNJ -0.14%) could be the poster child of stability. The healthcare giant has been in business since 1886, surviving and thriving through periods of even greater volatility than we're seeing now.

J&J ranks as the biggest and the most diversified company in the healthcare sector. It operates three multibillion-dollar business segments that lead their respective markets: consumer health, medical devices, and pharmaceuticals.

The company is also a Dividend Aristocrat. J&J has increased its dividend payout for a remarkable 58 consecutive years.

Johnson & Johnson's shares fell during the market crash earlier this year, but the healthcare stock didn't sink as much as the S&P 500 index did, and it quickly rebounded. Although the company's medical device business has been negatively impacted by the COVID-19 pandemic, the effects are only temporary. J&J should continue to be one of the most stable stocks on the market over the long run.