Amazon (NASDAQ:AMZN) and Target (NYSE:TGT) started on two ends of the retail spectrum. One rose to a seemingly dominant position in retail by pioneering e-commerce, while the other became one of the largest discount store chains in the country.

Target has leveraged an in-store and online presence to become an omnichannel retailer. However, with Whole Foods, Amazon-branded stores, and a vast real estate portfolio of industrial space, Amazon has built a growing physical presence of its own.

In 2020, Amazon has outperformed Target by a wide margin. Knowing this, should Target longs hold out for a comeback, or is Amazon poised to continue generating higher returns than its counterpart? Let's look at both retail stocksto find out.

Amazon seems to do no wrong. The company prospered during the coronavirus pandemic as lockdowns forced consumers to turn to online shopping. Also, the cloud computing business, which pioneered a new technology niche, continues to drive massive revenue growth and a majority of company profits.

It also speaks to the genius of Amazon. Its retail business strikes fear into the hearts of competitors. In the most recent quarter, net sales grew by 41% when excluding the impact of foreign exchange rates. Net income almost doubled over the same period.

However, Amazon earned a profit margin of just over 3.2% in the latest quarter on combined North American and international sales. That razor-thin margin and the market cap of over $1.55 trillion would deter most growth investors if not for one factor. Thanks to the profit margin of over 31% for Amazon Web Services (AWS), Amazon can still deliver massive profit growth despite its size.

Analysts predict profits will grow by more than 37% this year and nearly 40% in fiscal 2021. Moreover, at a forward P/E ratio of about 60, the valuation seems reasonable given the growth. As more consumers and businesses across the world embrace online shopping and cloud computing, Amazon's rapid march toward growth appears set to continue for the foreseeable future. 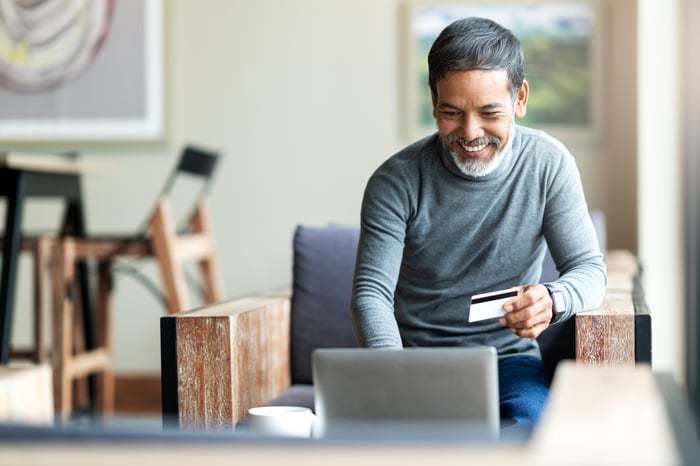 In recent months, Target has benefited from rapid growth of its own. Although Target isn't a cloud company or an e-commerce pioneer, it has prospered amid both competition from Amazon and the coronavirus pandemic.

At a forward P/E ratio of 24, its valuation has climbed to multi-year highs. Still, despite the rising multiple, it trades at a lower forward P/E ratio than Amazon, as well as peers such as Walmart and Costco.

Target also does not grow its profits at the same rate as Amazon. Still, the company logged 24.3% comparable sales growth year over year in the most recent quarter. This was a company record and included digital sales growth of 195%. That helped Target earn a profit margin of just under 7.5%, more than double that of Amazon's retail arm.

Consequently, analysts forecast earnings growth of about 12% for this year, though they expect that to slow to around 7% in fiscal 2021.

Additionally, Target is a Dividend Aristocrat, as it has increased its payout every year since 1974. The annual dividend is now $2.72 per share, a yield of around 1.8%. This compares to Amazon, which offers no payout despite its enormous size. It also positions Target to offer a rising cash return without shareholders having to sell any stock.

Although Target investors benefit from a cash flow stream that has steadily risen, I have to give the edge to Amazon.

For one, Amazon comes out ahead on the financials despite a higher earnings multiple. With its earnings increases far surpassing those of Target, it will probably offer higher returns over and above the elevated multiple.

Moreover, Amazon offers additional growth from cloud computing. In the most recent quarter, AWS profits increased by 58% from the same quarter last year. Grand View Research predicts a compound annual growth rate of 14.9% for the cloud industry through 2025. This should help AWS continue its massive growth rate.

Furthermore, Target only operates in the U.S. With stores in all 50 states and the failure of Target Canada in the previous decade, obvious long-term growth prospects appear limited. This is not the case with Amazon, which increased international sales by 38% in the most recent quarter.

Target may still find new avenues to increase profits. Nonetheless, if you are looking for larger, more certain growth prospects, Amazon is the choice.