If you're looking for a way to grow your money, the stock market is a good option. Stocks have historically produced one of the best returns of any asset class, a trend that should continue.

Whether you're just getting started or looking for some fresh new buys, deciding where to invest $5,000 is going to depend a lot on your risk tolerance and your financial goals. Here are three different paths to take: income, value, and growth. Behind each door are three stocks worth buying right now. 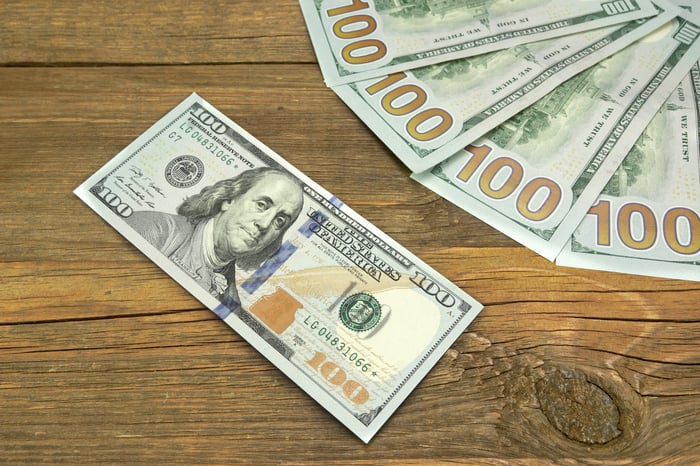 Unlike buying a stock and needing its share price to go up to make money, investors choose income stocks to get their dividend. Some dividends have tax advantages, and they can be a great way to generate income without having to sell stocks.

Caterpillar (NYSE:CAT) is one of the largest construction companies by market capitalization, and it also has its hands in energy and transportation as well as resource industries like mining. Caterpillar's business segments are hurting, but the company's industry-leading position and track record of getting through challenging times make it a great industrial stock to own over the long term. Despite Caterpillar's 25% price increase over the past three months, the company still yields an attractive 2.7% and has increased its dividend for 26 consecutive years – earning it a spot on the coveted list of Dividend Aristocrats.

Another Dividend Aristocrat is Chevron (NYSE:CVX), one of the largest oil and gas companies in the world. Chevron has increased its dividend payout for 32 consecutive years. The company has arguably the best balance sheet of any integrated oil major and the stock currently yields 6.6%. Despite lower oil and gas prices and refining margins, Chevron is a buy and looks well positioned to support its dividend for years to come.

Consumer staple behemoth Procter & Gamble (NYSE:PG) is the quintessential income stock. With 57 years of consecutive dividend raises, it's one of the longest-tenured Dividend Aristocrats. P&G's recent stock price increase has it near an all-time high, and its dividend yield has fallen to 2.3%. But consumer staple stocks like P&G tend to outperform the market during a recession, making P&G a good pick for risk-averse investors looking for extra income.

Value investors want to find downtrodden companies that are worth more than their current price tag. While it's a little harder to find value stocks in this market, JPMorgan Chase (NYSE:JPM), Royal Dutch Shell (NYSE:RDS.A) (NYSE:RDS.B), and The Walt Disney Company (NYSE:DIS) all seem like good candidates.

Lower interest rates and uncertainty surrounding the broader economy have pushed bank stocks out of favor, but JPMorgan has a track record of getting through tough times. CEO Jamie Dimon successfully steered the company out of the 2007-2008 financial crisis. His comments, letters, and memos are legendary and embody the importance of strong leadership. Over the last 10 years, JPMorgan stock has produced a total return of 220%, more than any other major bank stock, and around double second-place U.S. Bancorp. JPMorgan is down over 25% this year and trading at a lower valuation than historic numbers. 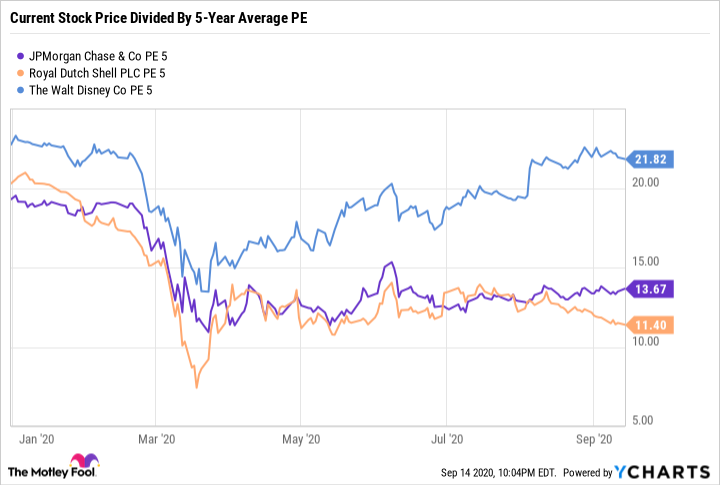 Oil titan Royal Dutch Shell is down over 50% for the year. Shell has responded to a challenging energy market by slashing the company's dividend, suspending share buybacks, cutting spending, and selling assets. Fewer dividend obligations and a historically low valuation position Shell to benefit from a recovery in oil and gas.

Growth investors are more concerned with rising profit margins and revenue than they are with a stock's valuation. Growth stocks seldom pay dividends but have the potential to disrupt industries. They can also be volatile and risky in the event growth slows so that lofty valuations can no longer be justified.

Virgin Galactic (NYSE:SPCE) is about as growth-oriented as you can get. The company earned $0 revenue last quarter. The logic behind its $3.7 billion valuation is that it has a first-mover advantage into space travel, something that has never been done before, which it hopes to pair with supersonic travel. If Virgin Galactic is able to achieve its goals of sending passengers into space in 2021, the stock could very well double.

NVIDIA (NASDAQ:NVDA) is one of the largest semiconductor companies in the world, and a leader in graphics processing units (GPUs) for gaming, artificial intelligence (AI), cloud computing, and graphic design applications. Its recently announced plan to buy Arm Limited from SoftBank for $40 billion in cash and stock has the potential to make NVIDIA an even stronger leader in AI and deep learning. The company's T4 GPU paired with Arm's chip manufacturing could produce even more growth. After underperforming the market in 2018, NVIDIA has been on an unstoppable run, nearly tripling in value since the beginning of 2019 as Wall Street finally recognizes its industry-leading position in a sector that continues to grow its total addressable market (TAM).

Adobe (NASDAQ:ADBE) has proven to be a winning growth stock for over a decade, but the success of the subscription-based Adobe Creative Cloud has been the driving factor behind the stock's unbelievable five-fold increase over the past five years. 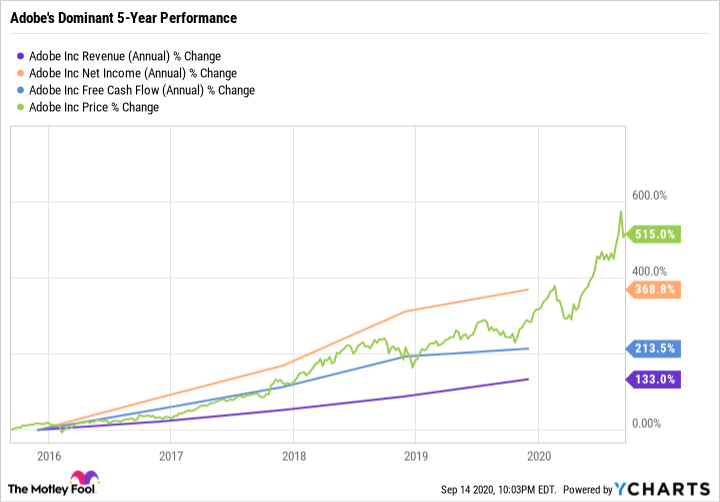 With revenue, net income, and free cash flow all continuing to grow at impressive rates, and a lack of competition due to its domination of digital media software, Adobe looks positioned to stay hot for years to come.

Picking good stocks can help you outperform the market, but picking an investment style that's right for you could provide refreshing continuity between your investments and your personal financial goals. Whether you're interested in income stocks, value stocks, growth stocks, or a combination of all three, there are plenty of great ways to invest $5,000.