Shares of Herman Miller (NASDAQ:MLHR) soared on Thursday morning after the office furniture maker ripped past expectations in its fiscal first-quarter earnings report, and reinstated its dividend. 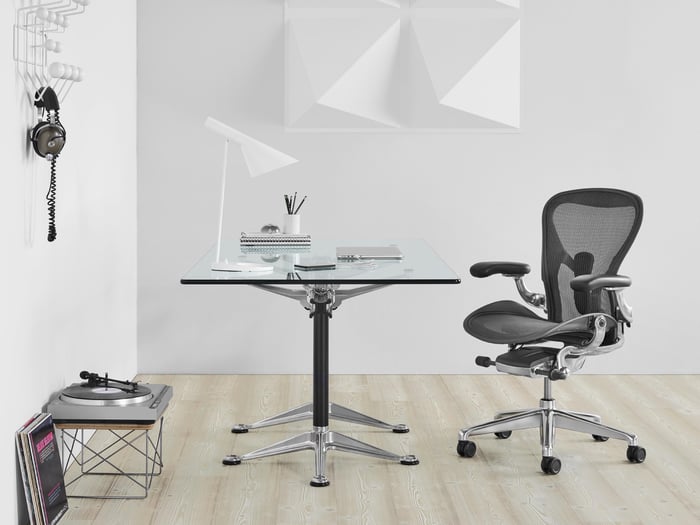 Herman Miller is still feeling the impact of the COVID-19 pandemic. Its sales fell year over year in the quarter, which ended Aug. 29. However, the slide was not nearly as big as analysts had expected. Revenue fell 6.6% to $626.8 million, and dropped 13% when excluding the impact of acquisitions and foreign currency moves, but that still crushed analysts' consensus estimate for revenue of $524.8 million.

While its North American contract segment, which deals with commercial offices, continued to struggle -- sales in that part of the business were down 40% -- its retail segment delivered 40% sales growth as demand in its home office category jumped by 300%.

Gross margin actually improved from 36.7% to 39.9% due to a favorable channel and product mix, as well as high manufacturing productivity, and the company trimmed its overhead expenses, all of which helped drive a surge in profits. Adjusted earnings per share jumped from $0.84 to $1.24, while the Wall Street consensus forecast was just $0.26.

In a letter to shareholders, management said, "Our diversified business model coupled with our ability to act quickly and decisively to manage the business drove strong operating performance for the quarter, once again proving our ability to deliver profitable results even in these difficult times."

Management did not give formal guidance; however, its backlog held steady from the previous year at $400 million. Orders in the fiscal first quarter were down 18%, but had improved to a 10% decline in the first two weeks of the fiscal second quarter, showing that the business is moving toward normalization. Due to cost-cutting moves made earlier in the calendar year, Herman Miller also expects its operating margin to improve by 25% to 30% over the long term.

The company also reinstated its dividend; its next quarterly payout will be $0.1875, giving investors an annualized dividend yield of around 2.2% after Thursday's share price gains.

Herman Miller shares are still down 20% year to date due to the plunge the stock took at the beginning of the pandemic, but Thursday's report, especially the jump in profits, shows the company is clearly on the right track.