A new survey by Simplywise reveals that 27% of Americans are planning to tap into their 401(k) accounts early, before the required age of 59.5, which is the highest percentage since the pandemic hit. Among Black Americans, the percentage was much higher at 40%, while Hispanic and white Americans were 28% and 18%, respectively. Furthermore, one in 10 Americans in their 50s are planning to withdraw early.

49% of those who were laid off due to the COVID-19 pandemic are planning to withdraw funds from their 401(k) plans, up from 39% in July, according to Simplywise's Retirement Confidence Index. The increases are due to two coinciding factors -- the hardships created by the pandemic and the resulting relaxing of the 10% early withdrawal fees by Congress through the CARES Act. However, the 10% fee is only wiped out for those people who were financially affected by the pandemic and for withdrawals under $100,000. 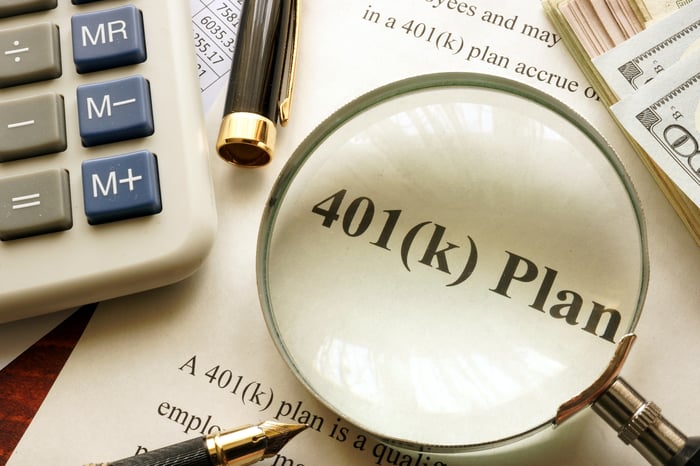 With the caveat that everyone's situation is different and hard times call for tough decisions, Americans should consider other options if at all financially possible. Here are a couple of reasons why.

It depletes your nest egg

The first reason is the most obvious -- any money you take out now reduces the amount of money you have in your nest egg when you retire. If your financial plan was to retire at 60, start tapping your 401(k), and then get Social Security at 67, you should try to stick to it. If you take out, say, $50,000 from your 401(k) now, you may have to alter your plans in retirement. That could mean taking Social Security early at a penalty. If you take Social Security at 62, your monthly check could be as much as 30% less than it would be at your full retirement age, which is 67 for most people.

It may also mean having to work in retirement. The Simplywise survey said 73% of Americans expect to work after they claim Social Security benefits. Furthermore, 50% of Americans in their 50s are worried about having enough money to pay for daily living expenses in retirement. Taking money from your 401(k) now will surely exacerbate that concern.

You lose out on investment returns

Another reason to hold off on taking early withdrawal from your 401(k) plan is that you would lose out on some of the returns that your assets generate through interest, investment returns, and dividends. For example, if you're 50 and you take out $50,000 from your plan 10 years early, and your investments earn an average of about 8% per year, and you contribute about $1,000 per year to the plan, you're losing out on about $70,000 of income just from that $50,000. In other words, that $50,000 would turn into about $120,000 in 10 years.

If you need the funding now for major expenses, like college tuition or a healthcare issue, consider other options, like taking a loan from your 401(k) if your company allows it. This way, you are, in essence, paying yourself back. The CARES Act increased the amount you can borrow up to $100,000, from $50,000 maximum previously. It also extended the time you have to repay the loan from five years to six years. However, if you default on your loan, the distribution is not penalty-free, so you would incur that 10% penalty.

If you lost your job due to the pandemic, it becomes a much tougher decision. If you do have to take a 401(k) early withdrawal, consider taking the minimum amount possible to get by until you get your next job. It may be difficult, but if you can get by on unemployment benefits, emergency funds, stimulus funds, budget cuts, low-interest loans, and downsizing where possible, without having to drain your 401(k) until your financial picture improves, you'll thank yourself in retirement.

More Than One Quarter of Americans Are Tapping Their 401(k)s Early, But Should They? @themotleyfool #stocks Next Article
Current