On Friday, Sept. 18, J.P. Morgan analyst Ken Goldman, along with research firm CFRA, downgraded Beyond Meat (NASDAQ:BYND) to a "sell" rating from "equal weight," sparking a sell-off in the stock, in sympathy with many high-growth technology names.

A leader in plant-based meat, Beyond Meat's stock has surged almost 100% this year, as its terrific growth rates and new innovations have fueled enthusiasm for the stock. But as a recent shareholder of Beyond, here's why I'm not selling my shares despite the stock's terrific run and J.P. Morgan and CFRA's downbeat take. 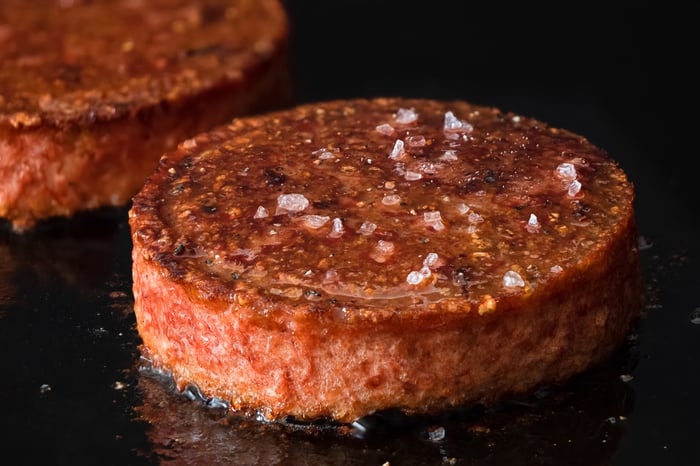 Is Beyond Meat a buy or a sell? Image source: Getty Images.

One thing Foolish investors should be aware of is that sell-side analysts, by and large, change their ratings based on six-month or yearlong time frames and attempt to make calls on near-term movements in stocks, which is how they set their price targets. It thus appears that these analysts believe Beyond's stock has run a bit too hot as of late and may not make its optimistic quarterly numbers next earnings season.

High-growth stocks are often volatile, and pullbacks of 20%, 40%, or even 60% or more are not uncommon. Certainly, Beyond Meat's high current valuation and nice run to date has made a pullback at least somewhat likely, but long-term investors know that trying to time these types of pullbacks, with the goal of getting back into the stock later, is usually a fool's (with a small "f") errand. And if you're trading a taxable account, the costs of trading in and out of a stock make that strategy even costlier.

As long as you believe in the product, management, and market opportunity of any growth stock, it's usually best to tune out the noise around near-term price fluctuations and concentrate on the bigger picture.

On that front, even J.P. Morgan's Goldman thinks Beyond's long-term outlook is still rosy. Digging in further to his take, Goldman admits, "In the long run, we believe Beyond Meat's growth opportunity is excellent, and we see the company as well managed with strong innovation and marketing plans."

Some issues to keep an eye on

That's not to say there wasn't any merit to both CFRA and J.P. Morgan's thesis. The primary headwind they cite relates to competition, as both research houses see privately owned rival Impossible Foods challenging Beyond's leading position in the near term.

According to their analysis, Impossible Foods has made headway in grocery stores such as Kroger and could take away market share.  Impossible also just raised $200 million in the private markets on top of $500 million earlier this year. With that war chest, analysts think Impossible could eat into Beyond's lead, so to speak.

Beyond's recent pace of innovation shows why it's a leader

I'm also not totally sure I buy J.P. Morgan and CFRA's take. There's a reason Beyond Meat's growth rate was much faster than those of its peers during the first half of the year, as its novel approach to marketing and leading innovation has made it a category leader to date.

The company isn't taking its foot off the gas, either. In just the past few weeks, Beyond has announced an approval to build a next-gen plant-based meat manufacturing facility in the Jiaxing Economic and Technological Development Zone (JXEDZ) near Shanghai, China. That approval follows on recent distribution deals in China with both food distributor Sinodis and Alibaba (NYSE:BABA) grocery store chain Freshippo earlier this summer. Meanwhile, it appears Impossible Foods, while perhaps gaining adoption in North America, may have to wait longer than expected for approval to enter the massive Chinese market.

In addition, in just the past week, Beyond rolled out the new Beyond Meatballs that should be hitting grocery stores in September. Beyond followed that up with an expansion of its meatless sausage patties to 5,000 additional grocery stores this month, more than doubling that product's current footprint.

In other words, if Impossible is gaining on Beyond's lead, these recent announcements seem to indicate Beyond is still growing strongly and still maintaining leadership.

With leadership in a category set to grow by leaps and bounds over the coming years, I think investors should keep their eyes on Beyond's execution and long-term market opportunity, rather than the near-term price target fluctuations or tit-for-tat competitive data points. On those important former factors, the picture still seems bright, which is why I'm still holding my Beyond Meat shares even in the face of recent downgrades.