Many medical real estate investment trusts (REITs) have bounced back from their COVID-19 pandemic lows, but not at the rate of the general market and some other lucky REITs.

There was a lot of concern among investors that declining numbers of doctor and hospital visits would slow the pace of rentals for medical REITs. While that did happen in some cases, occupancy and collection rates remained high for most. Healthcare REITs provide a simplified opportunity to invest in commercial real estate. Each of these REITs manages a portfolio of real estate properties and mortgages, and make money by collecting rent from healthcare tenants such as medical office buildings, hospitals, and nursing facilities. That's good for income investors, because it presents a real estate investment opportunity at a reasonable price.

Normally, when you look at dividend-producing companies, it makes sense to find one where its payout ratio is not more than 50%, in order to make sure that the company is spending money on its own future growth. But that calculus doesn't work with REITs because of their special status. The Securities and Exchange Commission (SEC) mandates that REITs should have most of their assets and income should be connected to real estate, and that the companies must pay shareholders at least 90% of their taxable income in the form of dividends. REITs can deduct all of the dividends they pay out, so most pay 100% of their taxable income to avoid paying corporate taxes. Global Medical REIT (NYSE:GMRE), Medical Properties Trust (NYSE:MPW), and Physicians Realty Trust (NYSE:DOC) all offer dividends with yields above 5%, and their shares show ample potential to bounce back as the pandemic ebbs. 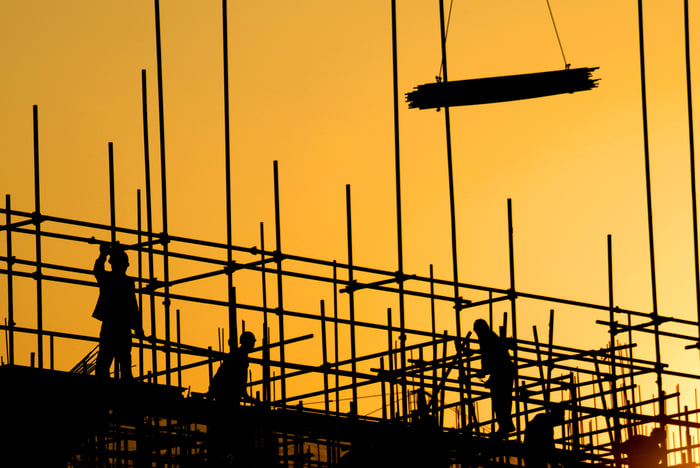 Physicians Realty Trust's share price is down more than 7% for the year, even though it has seen steady revenue growth over the past six years, with this year as no exception. In the second quarter, reported revenue was $109 million, up 15% compared to the same quarter in 2019, and reported net income of $18.4 million, a rise of 152% year over year. The company's current price-to-normalized funds from operations (FFO) ratio is 17.49, which is slightly above average for a healthcare REIT. Price-to-FFO is a more accurate metric for REITs than earnings per share (EPS) because depreciation expenses on real estate investment property are not usually considered a cost of operating such a business. While COVID-19 has impacted the medical field in many ways, its ripple effects have been hardly noticed by Physicians Realty, with a rent collection rate of 98% as of Aug. 3, according to CEO John T. Thomas on the company's second-quarter earnings call.

Even for the year, Physicians Realty is ahead of last year's numbers, with six-month revenue of $216.50, a rise of 8% over the same period in 2019 and net income of $33.40, a 77% improvement, year-over-year. It also has improved FFO per share, to $0.27 in the second quarter, compared to $0.21 in the same quarter last year and in line with how the company closed the fourth quarter last year.

The overall business model appears strong, and so does its dividend. Physicians Realty's quarterly dividend clocks in at $0.23 per share and boasts a yield of 5.26%. The company has offered the same dividend for the past two years, well above the S&P 500's average yield of about 2%.

2. Global Medical REIT is up for the year

Shares in Global Medical are up a paltry 1.6% year to date, but the company can still produce evidence that it's poised for growth. The company just announced a dividend of $0.20 a share, bringing its yield to 5.87%.

Instead of slowing its purchase pace, Global Medical bought five properties for $87 million this year, and revenue has taken off. Through the first six months, reported revenue is $43.7 million, up 36.2% year over year. Net income was $1.5 million, up 7%, compared to the first six months of 2019. The company's FFO per share was a reported $0.19 in the second quarter, compared to $0.18 year over year. The company's price-to-FFO ratio is 17.5, nearly the same as Physicians Realty Trust.

As of June 30, the company said that 98% of the properties were occupied and in the second quarter, the collection rate was 95%.

Shares of Medical Properties Trust are down more than 20% for the year, the biggest drop of the three. Not coincidentally, its dividend had the highest yield at 6.35%. Like the other two medical REITs, it has been steadily increasing annual revenue. It also sees the pandemic as an investment opportunity and has continued to add properties to its portfolio this year. It owns 390 hospital properties across nine countries, including 224 in the United States.

My favorite thing about Medical Properties Trust is that it raised its quarterly dividend to $0.27 a share this year. This is the eighth straight year the company has increased its dividend. 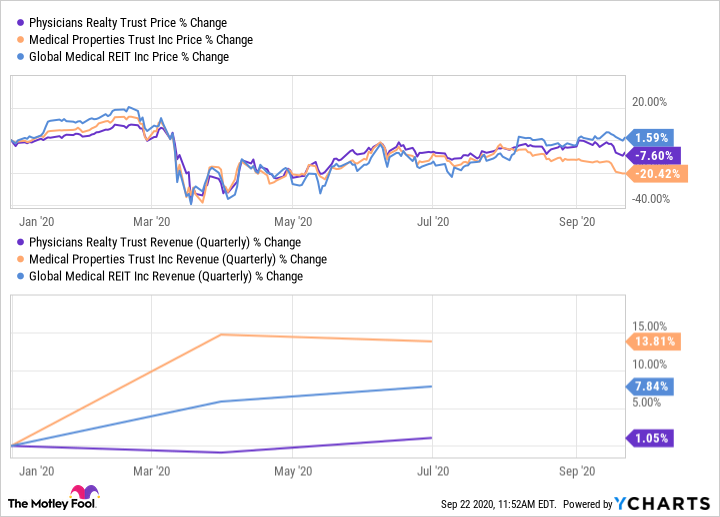 Finding value at the right time

These medical REITs have hardly been slowed by the pandemic, and their share prices don't necessarily reflect their value. They actually present good opportunities for dividend-minded investors. Of the three, Medical Properties Trust offers the most opportunity because its share price is lower, it has a great track record of raising its dividend and, as shown by its lower price-to-FFO ratio, it's the best priced of the three. Of the other two, I'd take Global Medical Trust over Physicians Realty because it has been aggressive in adding healthcare properties, taking advantage of lowered prices, and setting itself up for long-term growth.