Mercedes-Benz's corporate parent Daimler (OTC:DMLR.Y) said today that it will convert engine and transmission factories in Berlin and Stuttgart, Germany, in anticipation of production needs as its transition to electric vehicles (EVs) intensifies.

The two factory sites date back to the early 1900s, adding emphasis to the historic transition away from internal combustion engines and toward EVs. 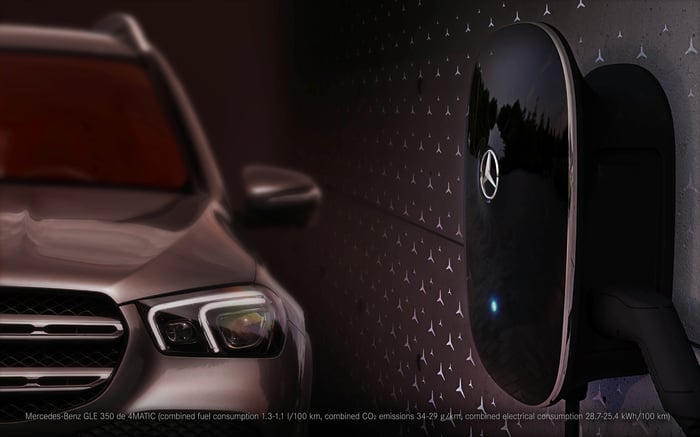 Daimler said German labor unions are involved in the planning, and wrote in an emailed statement about the transition, "Mercedes-Benz is firmly determined to transform its powertrain division consequently and gear it toward 'electric first.'" The labor unions told workers that the plans will result in cuts of approximately 20% to the 18,500-member workforce in Stuttgart by 2025. Daimler's global workforce totals about 300,000 people.

The plans are another step in the company's move toward electrification. Earlier this month, Daimler presented its technology strategy for electrification of its urban delivery and long-haul trucks. It plans to use hydrogen fuel-cell trucks for the long-haul transport segment. Its Stuttgart plant should play a large role in its electric mobility plan. The smaller Berlin plant will make electric and digital components.

Manufacturers are working to satisfy strict European emission limits. Sales of battery-electric and hybrid vehicles have risen this year, with help from government incentives. According to analysts at UBS Group, sales of such vehicles will nearly triple their industry market share next year to almost 15%, compared to 2019.

Daimler has said that its focus is on developing hydrogen powered vehicles, along with battery-electric vehicles.