Warren Buffett is quoted as saying, "It takes 20 years to build a reputation and only five minutes to ruin it." When I was a graduating college student in 2000, there were three companies with great reputations, where the competition for jobs was fierce: General Electric (NYSE:GE), ExxonMobil (NYSE:XOM), and Johnson & Johnson (NYSE:JNJ).

Exxon would top the Fortune 500 list the following year as the largest company in America, GE was named the most admired for a fourth consecutive year, and Johnson & Johnson was about to start an 18-year run of being named on the most admired list. While GE and Exxon have fallen precipitously in both market cap and admiration, Johnson & Johnson remains one of the most respected companies in America. But does it deserve to be? 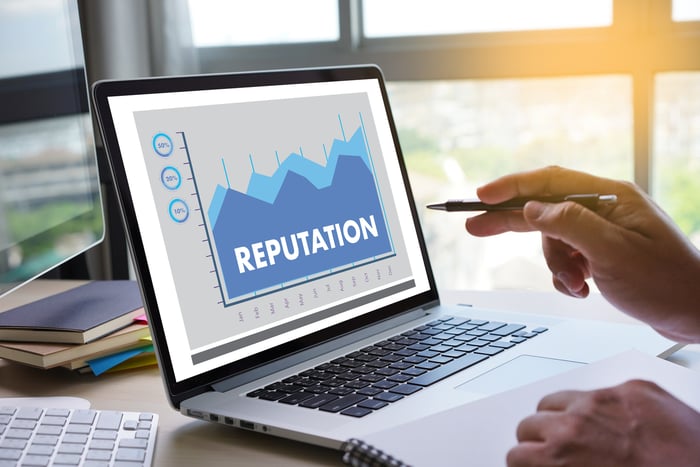 20 years to build a reputation

In 1982, the country was gripped with fear as several Chicago-area deaths were attributable to cyanide-laced Tylenol capsules. The maker of Tylenol -- a subsidiary of Johnson & Johnson -- took drastic measures to ensure public safety, including recalling the 31 million bottles in circulation. Instead of destroying the company's reputation, the swift action was praised.

In the time since then, particularly the past decade, Johnson & Johnson has experienced an unusual -- perhaps unprecedented -- steady stream of litigation, expensive judgments, and damaging disclosures, especially for a company still considered "admired."

Sooner or later, the past catches up

Expensive litigation doesn't always hurt shareholders. Typically, corporations are fined and the markets shrug it off as a non-operating or one-time expense. Johnson & Johnson has certainly experienced its share of legal wrangling. Despite negative headlines related to opioids, baby powder, hip replacements, and a schizophrenia drug, the company has held up well.

Many don't know that a Johnson & Johnson subsidiary in Tasmania supplied 40% of the world's opiates between 1982 and 2016. It even created a "super poppy" distributed in a drug by Janssen Pharmaceuticals, another subsidiary. In August 2019, the state of Oklahoma issued a $572 million judgment (later reduced to $465 million) for overly aggressive marketing related to this.

In May 2019, the company paid $1 billion to resolve cases where an artificial hip from subsidiary DePuy Orthopedics had to be removed because it caused pain, allergic reactions, and even death. Cases where the hip did not have to be removed are yet to be resolved.

In February 2020, there was a $344 million judgement against the company for false and misleading marketing statements about the risks associated with a vaginal mesh implant after 100,000 women in California filed suit. Claims in 41 other states against the subsidiary, Ethicon, were settled for $117 million.

In May of this year, the company discontinued talc baby powder sales in North America after the product was found to contain asbestos, resulting in almost 20,000 lawsuits from women with ovarian cancer. Johnson & Johnson blamed faulty testing and researchers, with mixed results. Some cases have been thrown out, while others have had judgements as high as $2.1 billion.

After marketing and distributing the schizophrenia drug Risperdal to the elderly and children -- two groups the FDA had not approved for use -- J&J has faced cases across several states. The most significant penalty came in the form of a $6.8 billion judgment against the company. A decision earlier this month confirming a $70 million verdict in Pennsylvania related to Risperdal paves the way for a punitive damages trial against the maker of the drug, Janssen.

That's a lot of bad publicity, and you might expect chairman and CEO Alex Gorsky, who took over in 2012, to be feeling the heat. If he is, he isn't talking about it. He has previously declined a Congressional request to testify related to the baby powder issue, and the company has failed to send a representative to Congressional hearings on the subject. His history at the company does run parallel to some of its legal issues. Prior to ascending to the top job, Gorsky was a sales rep and eventually president of the Janssen division referenced several times above.

Despite the legal troubles, Gorsky's wallet hasn't suffered. He's made $126 million in the past five years and, in a deposition, made comments related to an extremely well-timed stock sale indicating he held at least $400 million in company stock in November 2018.

Today, the stock sits exactly where it did at the time of that stock sale, just prior to the bombshell reporting about the company's baby powder. With the stock not gaining in almost two years and Gorsky serving as chairman and CEO, it's important to examine how other stakeholders might be viewing the company.

Despite continuing litigation, employees certainly approve of Gorsky's leadership and enjoy working at the company. Johnson & Johnson sports 4.1 stars on Glassdoor, and 95% of respondents approve of the CEO.

It's difficult to know whether doctors view the company as positively as employees, but we can see that admiration from the corporate world is waning. Johnson & Johnson has fallen from the fifth most admired company in 2009 to 17th and then 26th in 2019 and 2020, respectively. Although the company does still make the list, it appears the goodwill built up over decades is fading.

Johnson & Johnson is proving that it's much harder to tarnish a reputation than Warren Buffett thought. But consistent revelations of errors and wrongdoing and a CEO/chairman building extreme wealth while having overseen past questionable practices is starting to have an effect.

The company has long been the blue-chip anchor of many portfolios, but investors may want to avoid the stock until management can focus on the future instead of paying the tab for past success.