Please ensure Javascript is enabled for purposes of website accessibility
Log In Help Join The Motley Fool
Free Article Join Over 1 Million Premium Members And Get More In-Depth Stock Guidance and Research
By Bram Berkowitz – Sep 26, 2020 at 7:16AM

The past success of a movie franchise doesn't guarantee future success. The same goes for stocks.

Many people had high hopes for the latest Star Wars trilogy when it debuted with The Force Awakens. But after the release of the third and final installment, The Rise of Skywalker, most critics and fans had gone negative on Disney's (DIS -2.63%) latest attempt to revamp the beloved space opera. I personally thought the latest trilogy was terrible. I mean you're telling me that after all those prior movies, when they finally restore balance to the force, Han Solo's and Princess Leia's son is going to go bad a few years later? Or that Darth Sidious is still alive? Don't even get me started.

The failure of the latest Star Wars saga, however, can serve as an important lesson for investors: Don't be so easily fooled by the past reputation or success of a company. 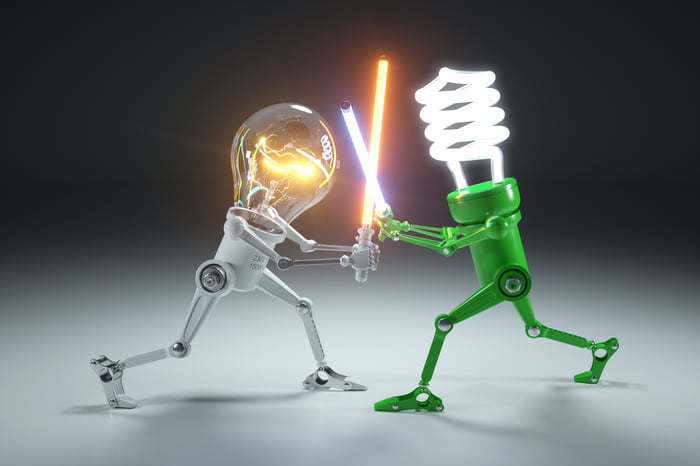 Don't get blinded by success

I've always been a pretty big Star Wars fan. I even liked the second trilogy that came out in the early 2000s that included The Phantom Menace, Attack of the Clones, and Revenge of the Sith, which I don't think was very well received. So when I heard there was going to be another new Star Wars trilogy, I was all in.

It's pretty easy for investors to do the same when trying to find stocks to invest in. You see a stock with a strong reputation and can't help but think that it will only keep going up. But just as sequels are hard to pull off, so is continuing appreciation.

Look at the failure of department brands such as Macy's and their struggles to adapt to e-commerce. Or the movie rental company Blockbuster and its inability to ward off competition from movie streaming services such as Netflix. At the peak of their success, very few people would have bet against brands like Macy's or Blockbuster, but it goes to show how fast things can change.

Now, this doesn't mean that big names and stocks that have historically done well can't continue to do well. It just means you need to do your research first.

Ultimately, you should use this philosophy and apply a healthy dose of skepticism to even Disney's stock, especially when it comes to the decision to purchase the Star Wars franchise when it acquired Lucasfilm in 2012. Disney and Star Wars seem like a match made in heaven, and they have certainly made some money. Five of the main new Star Wars movies made by Disney have grossed about $5.9 billion on an overall budget of $1.3 billion for a total profit of $4.6 billion. But remember Disney spent $4 billion to acquire Lucasfilm.

That still gives Disney a positive return on the purchase, but it's now been eight years and the company needs to be careful. Many of the new Star Wars films have gotten lackluster reviews. There have been struggles with Star Wars merchandise and the theme park push. And there are questions about where the franchise will go next.

It's easy to see a stock or a movie and want to go all in simply because of the name, or because of its past performance. I've definitely made the mistake myself. Always remember that past success does not guarantee future success. That doesn't mean you have to shy away from a big name; just make sure that whatever the company is doing -- whether it's making a big acquisition or venturing into a new business line -- fits in with its strategic vision, and that you understand what the company is trying to accomplish.